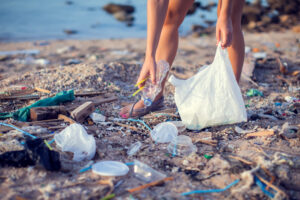 Globally, waste pickers are responsible for collecting and recovering – from homes, businesses and landfills – up to 60% of all plastics which are then recycled. These workers do more than any other people to prevent plastic contaminating the environment, yet their work is rarely valued and they struggle to earn a decent living.

Despite recycling the waste of others, waste pickers often lack waste collection services themselves. They suffer the consequences of pollution more than most by inhaling fumes from burning plastic and breathing air and drinking water that is heavily contaminated with microplastics. Waste pickers are also vulnerable to abuse and exploitation as a result of being women, immigrants, indigenous or belonging to ethnic minorities and oppressed castes.

Punta del Este, an affluent resort town in Uruguay, is hosting the first intergovernmental negotiations to create a legally binding treaty to end plastic pollution on land and sea. Punta normally hosts high-end tourists from Argentina and Brazil. Now, it is welcoming more than 1,000 delegates and observers from 160 nations and a range of environmental campaign groups, plastic industry representatives and waste pickers.

Waste pickers are known in Uruguay as clasificadores and can be found working in Punta’s nearest municipal landfill, a 20 minute-drive from the convention centre where the negotiations will take place. There, and in Uruguay’s capital of Montevideo, clasificadores have long carried out the lion’s share of plastics recycling. They scour landfills and bins and organise collections from homes and businesses before sorting recyclable from non-recyclable waste.

Clasificadores risk their lives doing this. In August 2022, a waste picker was found dead at Punta’s landfill – crushed by a reversing dump truck. While such deaths are thankfully rare, accidents, chronic illnesses and low life expectancy are common among waste pickers. Nevertheless, a new book by one of the authors, Patrick O’Hare, Rubbish Belongs to the Poor, shows how recyclable waste also offers a readily accessible source of income and provides a refuge for the poor and marginalised.

Waste pickers are increasingly included in municipal waste management plans and services in various countries. Beyond collecting and sorting waste, waste pickers have also taken roles teaching people how to recycle waste properly. Multinational companies which generate a lot of plastic packaging, including Coca-Cola, Pepsico, Unilever and Nestlé, recently signed up to an initiative which would commit them to improving the rights of people in the informal waste sector who recover plastic to make recycled packaging with. It’s hoped this process might eventually lead to manufacturers buying recycled material directly from waste pickers, fairer prices and improved health and safety standards.

Now, waste pickers are also partners in devising the global treaty to curb plastic pollution. A ten-strong delegation from the International Alliance of Waste pickers (IAW) is attending the negotiations in Uruguay to influence the treaty as it takes shape. The IAW demands to be represented in all future treaty discussions – and, for this reason, has called for ring-fenced UN funding for six waste pickers from different regions to attend subsequent meetings.

Efforts to clean up pollution will fail if new plastics continue to be produced at an increasing rate as forecasts suggest is likely. The treaty is expected to introduce new rules forcing plastic manufacturers to change the design of their products and restricting their production of non-recyclable plastic. It will also seek to increase recycling rates, since only around 9% of the plastic that has ever been produced has been recycled. The IAW are keen to ensure that waste pickers benefit from these changes.

Plastics are more likely to find their way into and pollute the environment if there is no market for recycling them. Unrecyclable or difficult to recycle materials, which are likely to face production limits in the treaty (such as expanded polystyrene and sachets), offer little value to waste pickers. Where plastic bans and caps would affect livelihoods, the IAW has called for waste pickers to be given opportunities to transition into other forms of work.

At the negotiations for a global plastics treaty, waste pickers are asking to be involved in how plastic waste and recycling policies are designed and implemented within countries and internationally. It may be too late for reforms to benefit the Uruguayan clasificador who died in August. Yet if negotiations in Punta del Este end with overdue recognition of the role of waste pickers in tackling plastic pollution, this will be a small step towards honouring his memory.