And the company's Swiss-born founder and industry veteran Werner Amsler still takes pride in staying ahead of the technology curve. 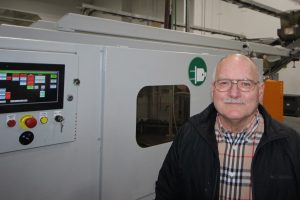 The year 1994 was a big one in many ways. Nelson Mandela was elected president of South Africa, for one. Closer to  home, the North American Free Trade Agreement (NAFTA) was established. And closer to home still, Ontario-based all-electric stretch blow molding machinery maker W. Amsler Equipment Inc. was founded – and unlike NAFTA it’s alive and well, and now celebrating its 25th anniversary.

The company was formed by Swiss-born Werner Amsler, a 49-year veteran of the plastic industry. Amsler emigrated to the U.S. in the 1960s and started his plastics career in 1970 as a moldmaker with the former Premier Plastics in Toronto and later worked for Bekum Plastics Machinery. He established blow molding company Swissplas Ltd., which was sold to Monarch Plastics in 1987. W. Amsler Enterprises Inc. was started in 1990, offering technical consulting and R&D; and then W. Amsler Equipment Inc. was formed four years later.

Family-owned and originally headquartered in Concord, Ont., W. Amsler Equipment Inc. was established with the goal of focusing on fully-electric machines instead of standard hydraulic presses. Operations were later transferred to Richmond Hill in May 1999. “Our simple formula has been to stay ahead of the curve in terms of technology, and meeting the needs of our customers in terms of quality, productivity, and sustainability,”Amsler said. “The trademarks of Amsler machinery are highly repeatable processing, energy savings up to 50 per cent versus hydraulics, and a 75 per cent reduction in maintenance costs. One of our primary beliefs is that company owners should be able to sleep at night while their machines keep running efficiently.”

The company has machines in 18 countries and the product line includes machines with one to six cavities between 50ml and 23 liters. The product line also includes linear machines with output to 10,000 bottles per hour and rotary equipment for up to 40,000 bottles per hour. “Our first all-electric L22 model machine, built in 1996, is still running today,” Amsler said. “Other technology achievements include the 2002 launch of the L16 single-cavity with 6L capacity and the 2010 introduction of the L32 convertible machine with adjustable cavitation for different bottle sizes.”

Amsler’s success has meant outgrowing its manufacturing footprint, which is a good problem to have. In August 2018, W. Amsler relocated its operations from Richmond Hill to an expanded 34,0000-square-foot site in nearby Bolton, which more than doubled the company’s previous facility and came in response to what Amsler calls “rapid growth” over the last five years. “The new location provides more room for machine development, pilot production, and classroom-style training,” he said.

Amsler was honoured for its technology achievements with the 2010 Plastics Innovator Award from the Canadian Plastics Industry Association. Today at 74, Amsler plays an active role as president while directing application work and machine development projects. Other family members involved with the company are Amsler’s wife Eunice as special projects manager, daughter Heidi as sales and marketing manager, son Jason as service manager, and son-in-law Greg Doeler as buyer and purchasing manager.