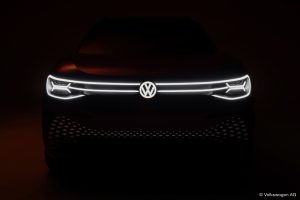 Illuminated logos are the next step in automobile emblems, as shown here on the VW ID.ROOMZZ concept car.  Image Credit: Volkswagen

These days, brand logos are some of the most recognizable images of all – think of the Nike Swoosh, or Amazon’s arrow.

Predating both – and most other logos, as well – is the circle surrounding the letters V and W in the Volkswagen logo, which is one of the best-known brand logos in the world. The basic shape of the logo has been in use since 1945 and has been subject to continued development over the years, with Volkswagen recently modernizing the logo in one of the world’s biggest rebranding exercises. “The new logo represents Volkswagen’s breakthrough into an electric, connected and CO2-neutral era,” says Klaus Zyciora, head of Volkswagen Group Design.

The new logo has been reduced to its essential components and appears in a flat, 2D design. This change is also reflected in the emblems of the current ID models, such as the ID.3: In place of chrome-coloured letters on a high-gloss black background, the new brand logo has a modern black and white high-gloss look designed to underline the positive perception of the premium brand, especially in combination with the increase in the emblem diameter by 4.5 centimeters, making it even more eye-catching when applied to the front or rear of a car.

The combination of two Plexiglas Hi-Gloss products is used by Austrian automotive supplier Ulbrichts GmbH to create the modern look of the emblem. The company uses a special molding compound from Röhm GmbH which has been used for black, high-gloss components in the automotive industry – such as pillar panels – for almost 20 years. This molding compound is used to create Class A surfaces with very high colour depth. The contrast between black and white helps the letters of the current logo clearly stand out, VW officials say, regardless of the paint colour beneath. Volkswagen has been using this effect for several years now, albeit in a modified version. Here, the famous chrome-coloured letters stand out thanks to the high-gloss black background made from the Hi-Gloss products.

And whether a combination of black and white or black and chrome, the glossy appearance is retained throughout the entire life of the vehicle, as the brand polymethyl methacrylate (PMMA) from Röhm is resistant against fuels and many other chemicals, as well as displaying an unsurpassed UV and weather resistance. “A logo is vital for brand recognition and should not fade or become brittle,” says Georg Scharpenack, CEO of Ulbrichts GmbH.

THE ROAD TO GET HERE

However, before the high-gloss emblems were finalized, the European market leader for automobile emblems and lettering had to perform significant development work. “Volkswagen approached us for the first time back in 2012 with the task of developing high-gloss emblems,” said Scharpenack. “Painted components were not feasible for cost reasons, which is why we experimented with various materials.” The goal was to find a material which could be formed into thin and high-quality emblems using an automated injection molding procedure. “We initially thought PMMA was not suitable for this,” Scharpenack continued. “However, Brenntag Austria and the products from Röhm convinced us otherwise.”

The Plexiglas portfolio was recently expanded to include a white colouring of PMMA from Röhm. “We are aware of the strengths of the different materials – and Plexiglas Hi-Gloss molding compounds also have several benefits when it comes to producing emblems,” says Joachim Schicker, account manager, material science-polymers at Brenntag Austria. These benefits make it possible to create the black-and-white high-gloss component with a Class A surface in just one work step when injection molding. “There’s no need to apply a subsequent high-gloss paint,” Scharpenack said. “We can therefore significantly reduce the cost for each component, a key factor when considering the high number of parts required in the automotive industry.”

The logo also will be illuminated in the future, not just on the vehicles, but at company sites and dealerships. The ID.ROOMZZ concept car showed off this aspect with its particularly striking light elements and illuminated front and rear emblems. “While European legislation currently does not permit brand logos to be illuminated on the road, several Asian countries do allow it. Plexiglas molding compounds are also available for this, as they can be used for various lighting applications in and around the automobile, guaranteeing the homogeneous scattering of light and enabling flexible design,” says Siamak Djafarian, who heads the molding compounds business unit at Röhm.