VECTOR INJECTION is worth the drive to Acton

When it comes to making small machines, this Ontario-based injection molding and assembly technology supplier has some really big ideas.

A celebrated advertising slogan in Southern Ontario for the Olde Hide House leather emporium says it’s worth the drive to Acton.

A new injection molding and assembly technology supplier located in the same town, about 70 kms north of Toronto, wants to make the trip worthwhile for some plastics processors as well.

Vector Injection was founded in 2014 by Evan Goodwin – a mechanical engineer with almost 20 years of experience in the medical part molding and hot runner industries – with a very specific goal: to design custom injection molding machines and mold-mounted injection units for processors that want a more personalized touch than large, volume-driven machinery makers can deliver. 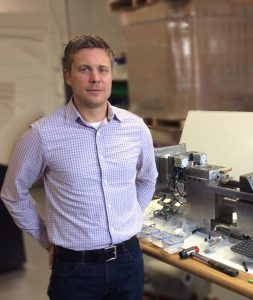 “In my previous jobs, I saw many applications in which part design was forced to fit with existing equipment that was actually oversized for the part and not ideal,” Goodwin said. “I wanted to take the opposite approach: to start with the finished part and move outwards to custom-design the best and most efficient machine possible to produce it.”

The more complicated the part design, Goodwin continued, the greater the benefits this part-centric strategy can deliver. “With a two-component part, for example, we’ll ask ourselves which part it makes sense to shoot first,” he explained. “We might determine that the best approach is to mold a small TPE shot first and then shoot the hard substrate underneath as the second step.”

It’s an audacious new paradigm, for sure, and Vector has a two-pronged approach to implement it. “On the one hand, we’re building our own standalone custom all-electric machines according to each customer’s requirements,” Goodwin said. “On the other, we’re building standard, compact mold-mounted injection units to integrate with existing larger machines – such as a smaller 100-gram-shot-volume five ton injection unit to integrate with a 2,000 ton press, for example. In these instances, our unit is small enough to fit within the existing machine guarding, which is a key benefit for smaller custom mold shops where floor space is at a premium.”

Small injection units are one of Vector’s hallmarks, in fact. “All of our injection units are half the weight and half the size of what’s available on the market now,” Goodwin said. “We can also get away with smaller, more efficient molds by strategically placing one or two injection units: the entire molding cell therefore becomes more manageable. It’s a modular, flexible approach that allows us to deliver whatever configuration the customer requires.” 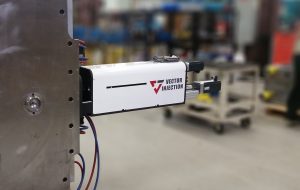 Vector’s staff size is small, too, but that doesn’t mean the firm is operating entirely on its own. “We use a lot of outsourcing, which gives us access to the right people for the right tasks while remaining lean,” Goodwin said. “At the end of the day, though, all of our injection molding machines are assembled onsite by our team.”

To date, Vector has supplied machines to American customers for molding automotive parts, consumer goods, and medical devices. “We’ve had a narrow, export-driven focus until now, selling equipment exclusively into the U.S., but we’re now looking to break into the Canadian market – it’s the natural next step for us,” Goodwin said.

The company has already achieved a first in Canada. “There are only two other companies in the world that I know of that are building small custom injection molding machines in the manner that we are, and neither is Canadian,” Goodwin said.

Having found its niche and begun to exploit it south of the border, Goodwin is confident that the company is ready to satisfy the requirements of molders on its home turf. “We’re a young team with a lot of vision and growth potential,” he said. “The big injection molding machine makers are focused on volume, and don’t give much attention to custom machines; we have the solutions to help molders with special needs.”

So, now it’s really worth the drive to Acton.