Researchers at Rice University are developing a way to use sunlight to grow functional synthetic polymers using photosensitive quantum dots as a catalyst. 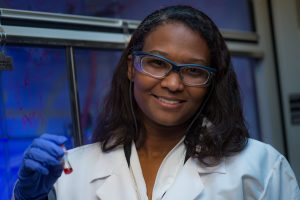 Fans of DC Comics know that Super- man, a Kryptonian, gets his super- human strength from exposure to the Earth’s yellow sun. (The scribes at DC even invented a pseudo-scientific name for it — the photonucleic effect — but we won’t get into that now.)

Back in the real world, meanwhile, the sun’s powers are just as impressive, and can be put to good use by real science. Case in point? Researchers at Rice University in Houston, Tex., are developing a way to use sunlight to grow functional synthetic polymers using photosensitive quantum dots — semiconducting particles only a few nanometers wide that have optical and electronic properties — as a catalyst.

The goal of the technology is to reduce the cost of producing polymers by replacing the molecular catalysts and expensive transition metals currently used to make things like methacrylates — which are common in plastics — as well as styrene and block copolymers.

As detailed in a recent issue of the American Chemical Society journal ACS Macro Letters, the research team — made up of Rice assistant professor of materials science and biomolecular engineering Eilaf Egap, Rice postdoctoral researcher Yiming Huang, and graduate student Yifan Zhu — applied light from various sources, including the sun and a lamp, to a solution containing the quantum dots, which led to the creation of free radical atoms and caused the solution’s acrylate monomers to link. Because the monomers tested in the lab had no ability to terminate propagation of the chain, the pro- cess is called living polymerization. “It will keep going until it consumes all the monomers or you decide to terminate,” Egap said. “The benefit is, if you have monomer A and you want to add monomers B and C in a specific sequence, you can do that. In a random polymerization, they would be randomly dispersed along the polymer backbone, but quantum dot polymerization shows promise for highly controlled growth of sophisticated polymers.”

The advantage of having controlled polymer growth, Egap said, is that it can lead to the discovery of new polymers with possible applications in solar energy, bioimaging, and magnetoelectronics. One new polymer might be a quantum dot photocatalyst with an attached semiconducting polymer that would simplify the manufacture of solar cells and other devices. “These could also be relevant to light-emitting diodes, magnetoelectronics, and bioimaging,” Egap said. “We could grow them all at once. That’s the dream, and I think we’re within reach.”

Sounds a lot more useful than leaping over tall buildings in a single bound.