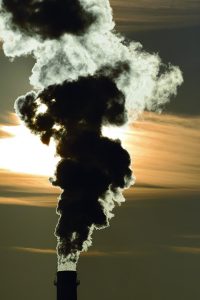 Where there’s smoke, goes the adage, there’s fire. But what happens when there’s no smoke — or more specifically, no smoke from industrial smokestacks? The answer, generally speaking, is fewer jobs — a signal, all too often, of the shuttering of facilities that used to manufacture domestic products as contracts move to lower cost countries.

The shuttered manufacturing plant has become one of the most visible symbols of economic decline in both the U.S. and Canada — powerful enough that President Trump evoked the image of “rusted out factories scattered like tombstones across the landscape” in his Inaugural Address in January.

The Trump administration’s prime directive is to bring manufacturing back to the U.S.; to reactivate these plants and — however ugly it looks — get them belching carbon dioxide back into the skies. In Canada, by contrast, the sight of smoke-free smokestacks and shuttered factories seems destined to become even more commonplace. On January 1, 2017, Ontario and Alberta adopted broad-based carbon pricing policies. Alberta opted for a carbon tax while Ontario chose a cap-and-trade system. Alberta’s carbon tax is $20 per tonne of carbon dioxide in 2017, while permits in Ontario’s cap-and-trade system currently trade at about $18 per tonne of carbon dioxide. Combine these with cap-and-trade programs already up and running in British Columbia and Quebec and roughly 85 per cent of Canadian businesses now live in a jurisdiction that has a price on greenhouse gas (GHG) emissions.

It’s all part of the Canadian federal government’s ambitious goal to set a national ”floor price” on carbon that all provinces must levy on emissions, a move that will also force the nine provinces and territories that do not already have a pricing mechanism to act. In October 2016, Prime Minister Trudeau said pricing should start at a minimum of $10 per tonne of carbon dioxide emissions in 2018, rising by $10 each year to $50 per tonne by 2022. Trudeau’s ultimatum to the provinces is to adopt a carbon tax or cap-and-trade system by 2018 or have one imposed. The government’s goal in adopting or expanding explicit carbon pricing is to drive down GHG emissions and shift the Canadian economy away from its dependence on fossil fuels.

Canada’s huge service sector, which does not generate GHGs, won’t be touched by carbon pricing. But the magnitude of those recommended increases in carbon taxes has stoked fears in the nation’s business community, particularly if key trading partners such as the U.S. lag behind. For industry, carbon pricing will add significant costs to doing business in Canadian provinces by directly increasing the price of gasoline, natural gas, and similar goods that are themselves a direct source of emissions. The clear losers will be energy-intensive industries such as industrial and manufacturing companies that consume large amounts of energy throughout their entire value chain. These concerns are summed up by Mitch Raymond, head of the Nova Scotia division of the Canadian Manufacturers and Exporters (CME). “It’s equivalent to paying twice,” Raymond told CBC News in an interview late last year. CME members worry that new carbon prices will create a competitive edge for other jurisdictions that don’t play by the same rules, Raymond added. “Members produce everything from steel to high-technology hardware,” he said. “While their emissions vary enormously, all are expected to pay more for the energy and supplies they use due to carbon prices.”

Major players in the Ontario chemical industry, based in Toronto and in Sarnia’s so-called Chemical Valley, also worry that high carbon costs in Ontario will erode competitiveness, not only in the production process but in the supply chain and transportation network. Nova Chemicals Corporation is a case in point. As with other firms in emissions-intensive and trade-exposed (EITE) industries, energy is a significant portion of Calgary-based Nova’s petrochemical production costs, and competition for markets and capital is intense. Nova’s petrochemical complex in Sarnia is a large emitter of GHGs, and the new provincial cap-and-trade plan will add to its operating costs. Nova has invested at that Corunna plant to process natural gas rather than crude, and is considering further expansion, but is assessing the impact of the province’s carbon pricing, amongst other things, before proceeding.

Nova is also being pressured by increased operating costs in Alberta: the firm’s billion-dollar expansion of its Joffre PE plant came online just as Alberta’s NDP government introduced its carbon pricing plan. “Nova has taken real action to reduce its carbon footprint by investing in the use of lighter feedstocks such as ethane compared to places like Asia and Europe that make the same products from heavier feedstocks, and carbon policies must take this into account to avoid the unintended consequence of effectively supporting coal projects elsewhere in the world at the expense of a cleaner ethane-based project in Canada,” said Naushad Jamani, Nova’s senior vice president, olefins and feedstock. “Regulatory certainty is extremely important because of the timelines in our decision-making process for large scale capital investments – without it, investments can be delayed or lost. At the same time, these regulations must be comparable with other jurisdictions to ensure we can effectively manage our costs and remain globally competitive. Competitiveness remains of critical interest to Nova and all EITE industry members.”

Other plastics-related sectors in Canada are also concerned about the effect of carbon taxes. Truck and car plants don’t generate a lot of emissions, but some of their suppliers do, and extra costs from a carbon tax would likely be passed along, hurting overall cost competitiveness with the U.S. and leading to new or expansion plants — and associated jobs — landing there instead of in Canada. Furthermore, about 98 per cent of Canada’s car industry is in Ontario, which means it’s now under a cap-and-trade system. “The auto industry is highly trade-exposed,” said Mark Nantais, president of the Canadian Vehicle Manufacturers’ Association (CMVA). “Ontario has recognized that transitional allowances for the first compliance period of the new cap-and-trade program and beyond are needed. The CVMA is committed to working with the Ontario government on the development of an appropriate regulatory framework suitable for the globally competitive environment in which we operate.” The CME has also called on the Trudeau government to ensure carbon pricing is not only revenue neutral, but that revenue from industry be returned to industry in a way that ensures it can still be competitive.

Other firms, meanwhile, are being individually proactive. “Resin and raw material supplying members of the Canadian Plastics Industry Association that are large final emitters in Ontario and therefore will be mandatory participants in the cap-and-trade program have been working with the government directly,” said CPIA president and CEO Carol Hochu.

Given that carbon taxes will be a fact of life going forward, the key to shielding EITE industries and their suppliers is — in the words of a recent report by Canada’s Ecofiscal Commission — “to get detailed information at the company level that proves exactly how they are impacted by carbon pricing, and then provide temporary relief to give the firm a limited period to find solutions.” That, and adopt a wait-and-see approach. “For the plastics industry as a whole, there will be direct and indirect costs that may have an impact on business operations in a noticeable manner,” Carol Hochu said. “How significant these will be is still to be determined, however.”

In the end, Canada’s carbon tax scheme has twin goals that are lofty and perhaps irreconcilable: no industrial smoke, but lots of economic fire.