Universal Gravo-Plast is getting a reboot

You don’t stay in business for over 60 years without doing something right, but odds are you’ll still have to reinvent yourself once or twice along the way. Even an institution like McDonald’s – now in its 61st year – has had to shift gears and start supplying salads and other non-fast foods in recent years, to fight the perception that it was out of touch with current tastes.

Universal Gravo-Plast Inc. (UGP) can relate to that. Founded in 1954 – just a year before McDonald’s, coincidentally – the Toronto-based injection molder, part prototype maker, and moldmaker has been a familiar feature in the Southern Ontario plastics processing landscape for decades. Maybe too familiar. If you’ve been in the industry for any length of time – especially in Ontario – odds are you know the company, if only by name. And odds are you think you know what it’s all about: a small-time outfit that does short production runs – as predictable as McDonald’s with its burgers and fries. But just like the Golden Arches, a closer look at the UGP menu these days might surprise you.

That’s because the shop is undergoing a major overhaul, under the guiding hand of Farhat Buchh, an entrepreneur who purchased the company in 2013. From its early days as an engraver, UGP progressed into toolmaking and then low volume injection molding, so change is nothing new. But what’s going on now is different in both size and scale – a carefully crafted transformation involving new equipment and new staff members, with the goal of substantially increasing the business through higher volume molding with higher tonnage machines. And while these are still early days in the reinvention, the results can already be seen. Call it the beginning of Universal Gravo-Plast 2.0.

NEW BLOOD
The previous owners of UGP did a good job guiding it through the recession, but by 2011 they were tired and wanted out of the business,” said Michael Draga, UGP’s director of sales. “By the time Farhat bought the company, it was basically in a holding pattern, and some of the equipment was a bit antiquated. It didn’t take him long to realize that changes had to be made.” That UGP didn’t exactly have a hammerlock on the industry’s attention quickly became obvious to Draga as well. “I was hired in early 2015, and when I began making sales calls, almost nobody knew we had new ownership, and some people weren’t even aware that the company was still in business,” Draga said. “It could have been discouraging, but we actually took it as a challenge, since by that point we had a plan already in place to reinvent the company.”

The reinvention kicked off with the hiring of some key new personnel. In addition to Draga, who beefs up the company’s sales side, Buchh also brought in industry veteran Ganesh Persaud to serve as director of operations and tooling coordination. Current staff size is approximately 17 workers. “The new hires combined with the existing staff – some of whom have been with UGP for decades – makes a good mix of new blood and old blood, new perspectives and older perspectives,” Draga said. “There are cultural and technical changes going on at the shop that present learning curves for some employees, but they’re all handling it well; in fact, those who’ve been with us for the longest are probably the most excited about UGP’s new direction, because they’re the ones who experienced the company’s drift.”

With a reinvigorated workforce in place, the next step in UGP’s evolution was to pull the trigger on some much-needed new equipment to add to its existing line-up of six small tonnage machines. “We increased our tonnage range from 40 to 500 just within the past few months,” Draga said. “We have a new 500 ton Nissei hydraulic machine – as well as a new 200 ton Nissei hydraulic unit – and are planning to buy a third new hydraulic machine within the next few months to help fill in the gaps. We’ve removed some of the older equipment and our stable now consists of eight machines. We’re content to stop at the 500 ton range for the short-term, but we plan to increase our tonnage range again in the future.” 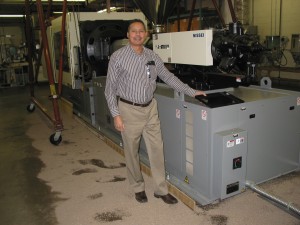 The higher tonnage molding machines are necessary to implement the third prong of UGP’s reinvention strategy: diversifying into new markets. “The display and merchandising product markets have always been big parts of our core business, and we remain very strong in these, but we’re definitely planning to expand into new areas,” Draga said. “We’ve entered into the mushroom and horticultural markets and will be supplying products for these by the first quarter of 2016; we have an exciting new project in the medical /dental field and are building the prototype tools for that; and we’re also involved in a tooling project for the packaging industry. These last two are both particularly complex parts and we’ve been able to come up with the solutions.”

The company’s fourth step remains a work in progress: relocating to a newer, larger headquarters. “We’ve been in our current 13,000-square-foot facility for about 30 years, so it’s obviously an older building, and too small to accommodate the level of growth we’re aiming for, which is to double the business within the next three years,” Draga said. “We need a larger, more modern space – preferably between 26,000 square feet and 30,000 square feet – and are currently looking for something in the greater Toronto area; something that makes logistical sense for our key customers and that offers better access to the major highways than we have now. On the other hand, we don’t want to overextend ourselves by choosing a building that’s too big, so we’re going to take the time to get it right.”

And finally, UGP is well underway with its ISO 9001 certification process and anticipates being registered in the second quarter of 2016. “This will open a lot of doors for us, particularly as we want to grow the automotive content of our business,” Draga said. “To compliment this initiative, we are expanding our quality control and molding technician departments by adding experienced personnel and new equipment.”

Not every aspect of the company needs an overhaul, however. The moldmaking side of the business has always gone just fine. “We have an in-house tool room, and the goal going forward is to maintain existing tools and perform preventative maintenance on them here,” Draga said. “When we get too busy we use local sources for our new tools. Previous owners used off-shore tooling but Farhat made the decision to keep the business inside Canada.”

CHANGE AND CONTINUITY
So just a few short years into its reboot, UGP has already morphed into a full service processing shop. “We provide fully functional parts, whether for prototyping, short production runs, or bridge tooling; we use high strength aluminum alloys in the manufacturing of our inserts, which allows for quicker machining and also ensures maintaining crucial geometric details for tight tolerance parts; and also offer complete in-house capabilities, including posting, mold decorating, hot stamping, ultrasonic welding, and contract assembly are just a few of the value added offerings we provide to our customers,” Draga said.

Sometimes, though, the more things change, the more they stay the same. “Throughout its long history, there’s been one consistency to UGP: flexibility,” Draga said. “We’ve always had the ability to change-out tools very quickly because of our specialization in low volume, low production runs. And we’ve retained that; we’re very comfortable doing changeovers every hour of every day, whereas most companies try to turn a machine into a dedicated run. We’re going to do that too, to an extent, but the quick change-over is still our biggest strength.”

But if the message hasn’t hit home by now, here it is: this isn’t your grandfather’s UGP. “The company drifted for awhile, but now we’re back and reinvigorated,” Draga said. “In the months that I’ve been here, I’ve already seen a wide range of customers and potential customers come in with plans for very complex parts – which other processors didn’t want to get involved with – that we took on and manufactured successfully. We have the tools, the ability, and the confidence again, and there’s a lot we can offer to the industry.”

You know how McDonald’s boasts of having served billions of satisfied customers? The revitalized UGP is aiming for lower numbers for sure, but the principle is the same.