Uncolour your world with the right commercial purging compounds

As important as it is to put colour into plastic, it’s just as important to remove it when the time is right, since any streaking in a new production schedule can render thousands of parts worthless. CPCs were made for this. 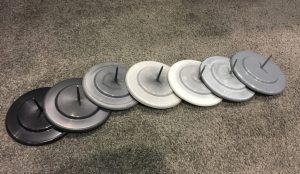 Colour change is a fact in many areas of life, and most of the time it hap-pens without any help from us: leaves turning different hues as summer gives way to fall, for example, or our hair greying as we inch our way into middle age. Other colour changes definitely don’t just happen by themselves – won’t happen at all, in fact, without direct human action.

Molding coloured plastic parts is definitely on this second list. Since resin is nearly colourless, most plastic products are not originally coloured – it takes the careful addition of colourants such as masterbatches, coloured pellets, or coloured compounds to achieve that. But the real work might be in getting those colours out of molding machines and extruders when necessary so they don’t linger for prolonged periods and contaminate new colour production runs. Which is where purging comes in. For molders, purging is the process of removing traces of old material and contaminants – including old colours – from molding equipment.

But with a plethora of commercial purging com-pounds (CPCs) to work with, which compound is the most efficient when it comes to colour changeovers? And what are the benefits of using a CPC at all as opposed to relying on process resin or regrind? The answer, almost invariably, depends on the particular job or situation.

One thing is clear at the outset: When it comes to removing colour, it’s better to purge than not to purge. And by and large, processors understand this. Market research studies conducted by manufacturers of CPCs during the past decade reveal that, while processors have mixed feelings about using CPCs for maintenance or resin changeovers, fully two-thirds prefer to use a CPC for colour changes. And it’s not hard to see why: Switching a molding machine or extruder directly from one colour to another without purging will see colours from previous run caught up in the machine’s dead spots; the new production resins will, without warning, push the old colours into new parts.

The result? Contaminated products that will end up in the scrap bin. Now that we know why it’s necessary, the first step to get the most out of a colour changeover is to identify which purging compound, of the many on the market, is the best for a particular job. Funny enough, this decision isn’t deter-mined by the colour change itself. “The type of processing machine and the processing temperature usually deter-mine which specific CPC to use, regardless of whether you’re doing a colour changeover or purging for any other reason, such as a resin change-over or scheduled maintenance,” said Jarred Packard, project engineer with Asaclean-Sun Plastech Inc. “You wouldn’t want to use a standard PP purge on a high-heat application in any situation, for example. “In other words, standard purging rules usually apply when it comes to colour changeovers.

Generally, mechanical purging compounds – which tend to work based on material affinity and viscosity differences, using the machine to perform the work – are the best choice for injection molding; chemical purges – which tend to have foaming agents in them, allowing the purge to expand into low-flow or poorly designed areas that a mechanical purge can’t reach – are better for extrusion. The caveat is that, since extruders often process the same colour for extended runs, colour changeovers are probably performed less frequently on extruders than on injection presses. And when it comes to blow molding, cleaning the accumulators on these units typically requires the use of a CPC volume of two or three times the accumulator capacity, regardless of whether the purge is to remove colour or resin.

Not only are there mechanical, chemical, and chemical-mechanical hybrid types of purging compounds, but each CPC manufacturer has its own proprietary compositions, different from the others. Since the CPC must be removed by the next processing resin, material compatibility between the CPC and the resin – as opposed to the colour – must be understood. For example, the screw slippage that can occur when the screw has difficulty picking up material from the feed throat – causing increased cycle time and other issues – can be caused by changing from a high-temperature material to a lower temperature material. If the temperature is lowered too soon during the purging process, the previous material will not be removed completely, resulting in buildup – both colour and other contamination – on the screw. 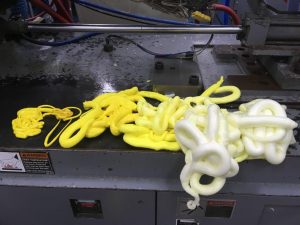 Also, different components of the molding machine can require specialized care when purging for colour. Take hot runners. CPC suppliers need to advise processors on which of their grades are safe for hot runners and the proper purging procedure to be used. For example, some of Chem-Trend L.P.’s CPCs have been designed specifically for use through hot runners, and have been shown to extract residues from previous production runs even weeks after a colour change. Sometimes purging hot runners requires hands-on attention. “We worked with a processor that had unsuccessfully tried to clean its hot runners with a combination of liquid-type purging compound blended with PP production resin,” Jarred Packard said. “This liquid purge didn’t even touch the black colourant they wanted removed, so we recommended our Asaclean NCR grade – since it was an ideal viscosity match – and then developed a customized four-point cleaning program for them.”

The most important thing, then, is to use a CPC the way it was meant to be used, since purges aren’t interchange-able. And when it comes to colour changeovers, processors have lots of product options to choose from. Shu-man Plastics Inc.’s Dyna-Purge A is designed for PP, and lends itself to on-the-fly colour changes. “It’s a uniquely engineered CPC that combines the key features found in both mechanical and chemical products,” said company president Ken Shuman. “This new hybrid technology is ideal for eliminating colour streaks.”

And Asaclean E by Sun Plastech is a styrenic-based CPC that can be used for colour changes in both injection molders and extruders, and is said to be well-suited for residue-sensitive applications due to its low-residue formulation. It also ensures fast and clean machine start-up, Jarred Packard said. A recent trial of Chem-Trend’s Ultra Purge PO compound at an overseas bucket manufacturing plant showed the product went beyond extracting depos-its left by the immediately prior pro-duction run; according to Graziano Pestarino, Chem-Trend’s European sales manager for Ultra Purge, it also extracted old colours that had built up over several previous runs.

THE TROUBLE WITH REGRIND

The contrast between using CPCs for colour changeovers and using in-house methods couldn’t be clearer, CPC makers and suppliers say. “Putting regrind, natural resin, or a homemade product through an injection molding machine simply layers new material residue on top of the buildup that was already there,” Ken Shuman said. “Those old colours can linger for long periods before breaking loose and appearing as streaks in new colour production runs. Real CPCs flush the colours out right away so they don’t reap-pear later on.” Processors that don’t use CPCs for colour changeovers often use their own regrind instead. And it almost never works. “While the cost of regrind is on the cheaper side, it’s just a production resin designed to make parts, not to attack and remove colourant,” Jarred Packard said. “Regrind may displace some of the previous colourant from a machine, but nowhere even close to all of it. It generally flows right through the middle of the barrel/screw and pushes the previous colourant and resin to the side barrel walls and trailing edges of the screw flights. It layers over and masks everything, leading to contamination issues down the line that can make a bad situation even worse.”

Using a high-quality CPC for colour changes is part of a good overall cleaning regime that will maintain machine cleanliness and reduce or eliminate downtime for unplanned stoppages. For example, a recent self-published report by Neutrex Inc. – the supplier of the Purgex brand of CPCs – compared the use of five different resins (PP, HDPE, PS, ABS, and nylon) to Purgex for changing from black to natural or yellow. On average, the report said, using the CPC decreased downtime by 75 per cent, lowered the scrap rate by 90 per cent, and required 94 per cent less material to purge.

In a perfect world, processors could move through the so-called colour wheel in an orderly fashion, transitioning from light parts to dark. But ours isn’t a perfect world. “It makes sense from a scheduling standpoint to run from light to dark, but the molder doesn’t always have control over that,” Jarred Packard said. “For molders that can control it – like automotive suppliers making door panels that only come in two or three colours: beige, black or grey – we do recommend going from lightest to darkest. By using a little forethought, and deciding which colours to do in what order, and using the right CPC, the molder can save hours of downtime per day.”

That said, the classic purging transition from dark to light will always present a challenge if not done with the right purging material. The Econo-Purge CPC from Slide Products Inc. is designed to quickly, economically, and effectively remove old colour residue for hard colour changes such as black to white in injection molding, extrusion, and blow molding operations. “Econo-Purge can effectively be used in the areas where colour always wants to accumulate – such as manifolds and hot runners – even when orifices are extremely small,” said Jeff Lewis, Slide’s technical sales manager. “It’s also very good at removing buildup in the check rings, and is one of the lowest odour CPCs you may ever use.”

Other resins can be difficult to remove because they have an affinity for metal, including some highly filled materials, powdered metallic pigments, and EMI shielding compounds. “Some blue materials tend to have affinity for metals, as well,” Ken Shu-man said. “What often saves these situations is that the processors using these niche materials recognize the difficulties, and will work with their CPC suppliers to come up with solutions.” Sometimes these solutions are relatively straightforward. “If you’re experiencing a difficult colour change or contamination, try repeatedly increasing and then decreasing the screw speed,” Shuman said. “Short bursts of agitation at a higher screw speed loosens the carbon or pigment. Subsequently slowing the screw speed down allows the purge to expand and push the loosened contamination out.”

Problems involving the exotic materials mentioned above can require more drastic remedies. “In extrusion, if you’re experiencing difficulty purging out highly pigmented colours such as blue or red, raise the barrel temperature approximately 50°F – or 28°C – above the normal operating temperature, so that the pigmented resin will dissolve better in the purging compound,” a Shuman Plastics technical paper said. “And always work within the resident resin temperature profile to minimize possible degradation of the resin.” In the end, colour changeovers shouldn’t be in-house jobs done with in-house materials. Bringing your CPC representative into the equation can save time, money – and, speaking of colours, maybe some premature grey hairs on your part.