Trimming Waste? A Guide To Six Sigma, Lean, And The Theory Of Constraints

For plastics processors anxious to get lean, but unsure how to do it, differentiating between the various process improvement methodologies can be tough. Canadian Plastics takes a look at Six Sigma, lean thinking, and the Theory of Constraints, and provides a framework to help choose what's best for your organization. 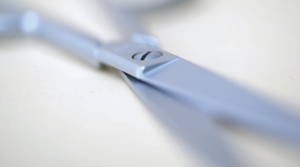 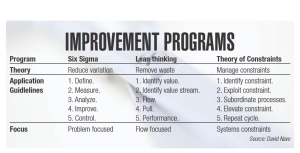 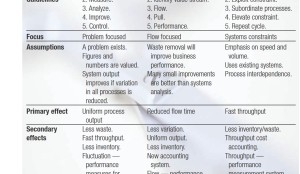 In today’s business climate, “lean” ranks alongside “green” as one of the hottest business models around. Ask the management of virtually any plastics processing company and they’ll invariably tell you that their shop is now running leaner than ever before.

But what exactly does “lean” mean? Champions of three process improvement methodologies are vying for attention, each describing his or her process as the solution to achieving a genuinely leaner manufacturing strategy.

A problem with Six Sigma, lean thinking, and the Theory of Constraints (TOC) methodologies, however, is they appear to conflict with each other, creating confusion about their similarities, differences, and effects.

With more and more manufacturers trying to decide which method will work best and fit best with their culture, a proper understanding can make all the difference in choosing the right approach.

Six Sigma derives its name from the ability of manufacturing processes to produce a very high proportion of output with specification. According to David Nave, a member of the American Society for Quality, the methodology is founded on two main assumptions. First, people in an organization understand and appreciate the fact that numbers can represent features and characters of a process, and that a deeper understanding of data and data analysis can provide new and different perspectives of the process. Second, the overall performance of the organization will be improved through the reduction of variation of all the processes.

The cornerstone to Six Sigma is the belief that focusing on reduction of variation will solve process and business problems. By using a set of statistical tools to understand the fluctuation of a process, the theory argues, management can begin to predict the expected outcome of that process. If the outcome isn’t satisfactory, associated tools can be used to further understand the elements influencing that process. “Six Sigma represents a very black-and-white approach to manufacturing,” said Clifford J. G. Roebuck, CEO of Six Sigma Canada Inc. “The methodology looks at a statistical number to determine whether or not to make a change in a company’s manufacturing process.”

Six Sigma methodology includes five steps, said David Nave. First, practitioners begin by defining the process. “They ask who the customers are and what their problems are; identify the key character- istics important to the customer, along with the processes that support those key characteristics; and then identify existing output conditions along with the process elements,” Nave explained. Next, the focus shifts to measuring the process. Key characteristics are categorized, measurement systems verified, and data collected. Third, data is analyzed and converted into information that provides insights into the process, as well as the most important causes of problems. Fourth, improvements are developed to solve problems, and results of process changes are seen in measurements. “Finally, in the sustaining portion of the Six Sigma methodology, the process is put under control once performance reaches the desired, predictable level,” Nave said. “From this point on, the process is monitored to ensure no unexpected changes occur.”

When implementing the methodology, Clifford Roebuck said, it could help to have a Six Sigma expert — called a Black Belt — working inside a company, although such an arrangement is not absolutely necessary. “Most of our customers don’t have that resource when we begin,” he said.

For companies interested in training an employee to become a Black Belt, the investment is generally about $1,000 per week for each person trained, Roebuck continued. “The training program takes approximately four weeks, usually spread out over several months,” he said. “On average, the process takes between four and seven months for someone knowing nothing about Six Sigma.”

There’s never been a better time to learn Six Sigma, Roebuck said. “There used to be just one basic Six Sigma package available, but nowadays it’s become very customized. Our company alone has 20 different approaches available,” he said. “Furthermore, the materials are now made available in step-by-step guides so that virtually anyone can learn it.”

Lean thinking, often called lean manufacturing, is a production process that considers the expenditure of resources for any goal other than the creation of value for the end customer to be wasteful, and thus a target for elimination. Originating in the Japanese manufacturing industry, one common measure of lean is touch time — the amount of time the product is actually being worked on, or touched, by the worker.

According to David Nave, there are five essential steps in lean. “The first step identifies which features create value,” he said. “Value is expressed in terms of how the specific product meets the customer’s needs, at a specific price, at a specific time. The value determination can be from the perspective of the ultimate customer or a subsequent process.” The second step is to identify the sequence of activities called the value stream. A determination is made as to whether activities that do or do not contribute value to the product are necessary. All non-value added activities are phased out of the production process. Third, improvement efforts are directed toward making the activities flow — “flow” being defined as the uninterrupted movement of product or service through the system to the customer. “Major inhibitors of flow are work in queue, batch processing, and transportation,” Nave said. “These buffers slow the time from product or service initiation to delivery, tie up money that can be used elsewhere, and cover up the effects of system restraints and other wasted activities.” Fourth, after waste is removed and flow established, efforts turn to letting the customer pull product for service through the process. The company must make the process responsive to providing the product or service only when the customer needs it, not before and not after. “The final step of the process is working toward perfection,” Nave said. “This effort is the repeated and constant attempt to remove non-value activity, improve flow, and satisfy customer delivery needs.”

Lean providers stress that the process involves many people in the value stream, and that the transitioning can cause fundamental changes in how people perceive their roles in the organization, and their relationships to the product. Commitment to the process is therefore crucial. “Ultimately, almost very aspect of a plastics production plant has to change, and a company has to be willing to commit, from the senior management level on down,” said Don Kivell, president of Lean Manufacturing Solutions Inc. “A lean program can be started almost immediately in certain areas, but the cultural change can take years.”

One of Kivell’s clients, custom molder Melet Plastics Inc., saw measurable results in months after adopting the lean approach. According to general manager Bill Fenton, the company set up a U-shaped cell that reduced the distance traveled in one particular manufacturing process by 77 per cent. Overall, the company was able to cut average machine times by 51 per cent, space consumption by 35 per cent, and changeover times from 60 minutes average to less than 10 minutes in some cases. “The change to lean was not terribly difficult for us because our management supported it thoroughly,” Fenton said. “The ongoing challenge now is to not fall back into our old ways.”

Less well-known than Six Sigma and lean thinking, TOC is an overall management philosophy based on the application of scientific principles of logic and reasoning to guide human-based organizations.

Applied to manufacturing, the guiding premises of TOC are that a production rate is limited by at least one constraining process, and that only by increasing flow a
t the bottleneck process can overall throughput be increased. A good analogy for a system is a chain, according to David Nave: a group of interdependent links working together toward a defined goal, with the constraint as the weak link. TOC zeroes in on the process slowing the speed of product through the system and preventing the organization from obtaining its goal.

TOC consists of five steps, Nave continued. First, the constraint is identified. “The amount of work in queue is a classic indicator,” he said. “Another example is where products are processed in batches.” Once the constraint has been identified, the second step involves exploiting the constraint: improving the process to achieve its utmost capacity without major expensive upgrades or changes. Third, after the constraining process is working at maximum capacity, the speeds of other subordinate processes are paced to the speed or capacity of the constraint. “Subordinate processes are usually found ahead of the constraint,” Nave said. “Processes after the constraint are not a major concern, as they are probably already producing under capacity because they have to wait on the constraint.” The fourth step occurs if the output of the overall system is still not satisfactory, and requires major changes to the constraint. “Changes can involve capital improvement, reorganization, or other major expenditures of time or money,” Nave said. “This is called elevating the constraint.” Finally, once the first constraint has been removed, another part of the system or process chain inevitably becomes the new constraint. “Now is the time to repeat the cycle of improvement,” Nave said. “The performance of the entire system is re-evaluated by searching for this new constraint, exploiting the process, subordinating and elevating.”

Vinyl film supplier Canadian General-Tower Limited began implementing TOC in 2002, according to president and CEO Jan Chaplin, based on the management’s desire for a more logical business approach.

There was a hurdle at the outset, though. “We were concerned that TOC wasn’t very popular, and that it would be difficult to find anyone to support it,” Chaplin said. “We decided to go ahead with the implementation, though, because the theory behind it was inarguable: it’s pure math logic, and boils down to focusing on the one operation that you’re trying to improve.”

Introducing the methodology into the fifth generation family firm proved to be another hurdle. “TOC dictates response to actual demand, not forecasted demand, and this was counterintuitive to us, and went against the way we’d always done business,” she explained. “In the end, we had to let almost half our senior management go, including our plant manager, because they simply didn’t trust it.”

After applying TOC to virtually every aspect of the company’s operations, Chaplin has no doubt that the procedure was well worth the time and trouble. “Our on-time delivery has been reduced from five weeks to two weeks on select products,” she said. “We’ve also had an improvement in our capacity of 50 per cent per constraint, and we’ve been able to dramatically reduce our overall inventory.”

Chaplin doubts the company would still be in business today if not for the changes brought about by TOC. “Our company is very involved in the auto industry, and TOC has given us the ability to outlast our competitors, and actually pick up their business as they’ve fallen,” she said. CPL