Developed by researchers at the University of Akron, the cup could herald a breakthrough in the PLA market. 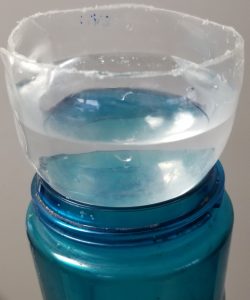 The prototype PLA cup developed by Kumho Polymer Science Professor Shi-Qing Wang, Ph.D., is transparent and super tough, and does not shrink when filled with boiling water. Photo Credit: University of Akron School of Polymer Science and Polymer Engineering

Ever since that skinny guy on the beach got sand kicked in his face by a bully, bulked up, and then punched the bully out in front of an adoring crowd, the benefits of getting stronger have been obvious.

And that goes for polymers too, which is why a team from University of Akron (UA), in Ohio, is focusing on research that showcases effective strategies for turning brittle polymers into tough and flexible materials. The group has recently produced a prototype poly (lactic acid) (PLA) cup that is transparent, super tough, and doesn’t shrink when filled with boiling water.The problem that had to be overcome with PLA – which is the world’s foremost 100 per cent bio-based and fully compostable polymer – is that it has low toughness and a low heat distortion temperature, making it unsuitable for many hot food packing applications and disposable containers.

This new research, led by Dr. Shi-Qing Wang in UA’s School of Polymer Science and Polymer Engineering, shows that PLA can be made to have superior mechanical and thermal characteristics and thus show promise to replace conventional petroleum-based polymers such as PET.

To explain the science behind how the prototype PLA cup can gain ductility and achieve heat resistance, Wang uses the analogy of cooked spaghetti. If the molten PLA is magnified by a million times, each chainlike molecule would look like a strand of spaghetti, many meters in length. For thermoplastics (including PLA) to be tough, it is important that crystallization does not remove or disrupt the intertwining of “spaghetti strands”.

The interwoven structure is called the “chain network”. It is through such a structure that anyone can pick up nearly all of the spaghetti strands out of a bowl with a pair of chopsticks. This chain network, when properly manipulated, ensures that the PLA beverage cup is mechanically strong without crystallization. But such a commercial cup collapses when boiling water is poured into it. “Cups made from normally crystallized PLA can hold boiling water but are terribly brittle and opaque,” Wang explained.

By investigating the origin of ductility in semi-crystalline polymers, Wang’s research group discovered a way to limit crystals to nanoscopic scales in PLA while preserving the network, resulting in the clear, tough, and heat resistant cup. Such a transparent cup can hold hot tea and coffee and could replace most plastic beverage cups on the market.

“The impact of our new understanding could finally stimulate the PLA market to grow exponentially,” Wang said.

A U.S. patent on how to modify PLA based materials has been filed through UA’s Office of Technology Transfer.