Using waste cooking oil has significant potential, the researchers say: it’s cheaper to make and the plastics made from it can break down naturally compared to conventional 3D printing resins. 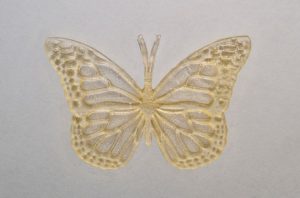 Call it an industry-specific example of the butterfly effect: Researchers at the University of Toronto in Scarborough have successfully 3D printed a high-resolution, biodegradable butterfly from waste cooking oil, and it could have big impacts on both additive manufacturing and recycling.

The project was led by Professor Andre Simpson, director of the Environmental NMR Centre at U of T Scarborough, who hit on the idea as being a cheaper and more environmentally friendly alternative to conventional 3D printing resins. Simpson received funding from the Natural Sciences and Engineering Research Council of Canada, the Canada Foundation for Innovation), the Government of Ontario, and the Krembil Foundation.

Harder to obtain was the waste cooking oil. Simpson contacted all major national fast food chains, but only McDonald’s responded, and the oil used in the research came from a local outlet in Scarborough. Simpson and his team filtered out chunks of food particles, and then used a straightforward one-step chemical process in the lab, with about one litre of used cooking oil necessary to make 420 ml of resin.

The first of several items printed was the afore-mentioned plastic butterfly (pictured). “The formulated resin produced high-resolution prints with features down to 100 micrometers,” Simpson. “The rapid prototyped prints show considerable thermomechanical stability, morphological homogeneity, and biodegradability when compared to a state-of-the-art research resin and a commercial resin.”

The project has several potential benefits, Simpson said, beginning with finding a constructive, biodegradable end-use for used cooking oil, which can otherwise cause serious environmental issues by clogging sewage lines.

And at the “end-of-life” stage, the researchers found that after burying a 3D plastic object made with their resin in soil, it lost 20 per cent of its weight in about two weeks. “The fat is something that microbes actually like to eat and they do a good job at breaking it down,” Simpson said.

And then there’s price. Conventional high-resolution resins can cost upwards of US$525 per litre because they’re derived from fossil fuel oils and require several steps to make. All but one of the chemicals used to make the resin in Simpson’s lab can be recycled, meaning it could be made for as low as US$300 per tonne, which is cheaper than most plastics.

“Most recycled waste cooking oil is currently used in the production of soap and biodiesel,” the team said. “It may be transformative for recycling programs if high-value commodities [such as resin] can be manufactured directly from it.”