To buy or not to buy a 3D printer?

For plastics processors with a steady use for 3D-printed parts, that's definitely the question: is it better to make the investment for an in-house machine or outsource the printing? We asked some of the experts. 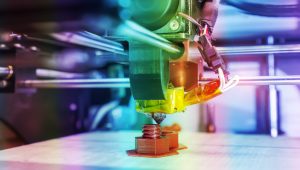 The COVID-19 pandemic has dealt setbacks for plastics processing, and created a few opportunities too. And one of the latter that’s received outsized attention is in 3D printing. Especially in the early days of the crisis, shortages of medical devices and protective equipment led medical workers and manufacturers around the world to turn to 3D printing to fill the void.

But in this case the pandemic simply accelerated a trend, as more and more plastics processors have for years now been interested in printing parts for a variety of reasons and functions.

All of which makes the question of whether or not to buy a 3D printer – as opposed to outsourcing the technology – timelier than ever.

The process by which digital 3D design data is used to build up a component in layers by depositing material, 3D printing – also called additive manufacturing and, in the early days, rapid prototyping – allows for customer-specific components in a short time, without any tool molds or changeover costs. For a high-volume production run of hundreds of thousands of parts, it’s become well-established that 3D printing isn’t an effective option, since it can’t come close to competing with the speed, efficiency, and repeatability of an established process such as injection molding.

But there are other areas where it offers advantages over traditional molding. “Injection molding’s Achilles Heel is its high set-up costs and the lengthy lead times to get to the production stage due to the necessity for steel tooling,” said Nick Allen, marketing director for 3D Print UK. This is where 3D printing can shine by expanding the possibilities for part prototypes, short-run molds, and production mold tooling.

For plastics processors that have decided their business needs 3D-printed parts, however, the path to operational implementation isn’t always clear. The almost literal million-dollar question is, do you buy a 3D printer or order parts through a 3D printing service provider? As it turns out, the answer depends on the answers to a host of other questions.

According to some of the experts, the applications you plan to 3D-print should be your number one decision driver. In short, which molding process are you trying to replicate? For injection molding – the most common plastic part making process – the closest additive manufacturing process is selective laser sintering (SLS), which uses a laser to sinter powdered nylon or polyamide according to a 3D model, binding the material together to create a solid structure. “SLS is the only 3D printing technology that comes close to an injection molded part,” said Annette Kalbhenn, sales and marketing manager with 3D Prototype Design Inc. in Toronto. But like all 3D printing processes, it comes at a cost to quality. “Parts printed with SLS don’t have the smooth surface and finish of injection molded parts, so there’s always a compromise in that respect,” Kalbhenn continued.

To replicate blow molding, stereolithography (SLA) is a good fit. SLA works by using a high-powered laser to harden liquid resin that’s contained in a reservoir to create the desired 3D shape. “It’s really the only 3D printing process that can support blow molding,” said Andrew Sliwa, managing director with Custom Prototypes, headquartered in Etobicoke, Ont. “It’s also the best choice for printing packaging parts like clamshells.” SLA has the benefit of being able to produce multiple parts at the same time, Sliwa added.

The third of the three primary technologies adopted in 3D printing is fused deposition modeling (FDM), in which a thermoplastic filament is heated to its melting point and then extruded, layer by layer, to create a 3D object. As such, it’s the best additive manufacturing technology for mimicking extrusion. The problem is that extrusion is, by definition, a difficult process to 3D-print, period. “Even using FDM, additive manufacturing is limited to making short-section prototypes of longer extruded parts because you can’t 3D-print a long part,” Sliwa said.

A second consideration is the volume of 3D-printed parts you require, by month or by year. “Frequency of usage is definitely a determinant in whether or not to buy an industrial 3D printer,” said Kevin Han, CEO at Montreal-based AON3D. “Every 3D printer vendor has seen manufacturers who bought expensive 3D printers and then never used them.” This is an area, the experts say, where it’s best to be honest with yourself. “Ask yourself how many parts you’ll actually be printing as opposed to how many you hope to print,” said Annette Kalbhenn. “You don’t want to have to print parts simply to justify having the machine. Current demand alone should justify it, not expectations going forward.”

At a basic level, the experts say, if you think you’re going to need a high mix of part designs at a low volume – which usually means making prototype applications – it may make sense to purchase a printer since you won’t require multiple systems working at once. But if you’re planning on printing a high volume of a low mix of part designs, a service bureau that has capacity and an extensive quality team to ensure consistency and repeatability might be the better answer.

WHAT YOU DON’T KNOW CAN HURT YOU

The familiarity of your team with additive manufacturing is another factor to consider. And it may be a problematic one, due to the common misperception that 3D printing is easy. “Most people don’t know as much about 3D printing as they think, even those with training in CAD/CAM design,” Annette Kalbhenn said. “The industry promotes 3D printing as being as simple as plugging the printer in and pressing the print button, but there’s much more to it than that.”

In fact, while additive manufacturing frees designers from a lot of traditional constraints and allows engineers to create parts solely for desired form, fit, and function, there’s a steep learning curve when it comes to designing for 3D printing. Which means that bringing a 3D printer in-house usually means training your staff – or even hiring new talent. “To run an SLS machine, you need a specialist,” Kalbhenn said. And while 3D printing is now becoming a part of mechanical engineering education, it’s not yet fully established. “There’s a definite skill set requirement, especially around high-end printing, and if you don’t have it, outsourcing part production to a specialist is a way to minimize risk,” Kevin Han said.

Finally, once the part has been printed, some degree of post-production treatment is usually necessary for resin-based projects. Although not all steps are required for all projects, this can mean removing support material and structures, perhaps with knives or pliers; powder removal; washing the part in a solvent bath; filling small holes or cracks or even attaching together parts that have been printed separately; curing or hardening; and surface finishing, which can include smoothing the surfaces by sanding. Post-processing can be costly, especially when done by hand – and this manual post-processing is labour-intensive and isn’t scalable. “It’s an open secret in the 3D printing community that post-processing is the biggest problem,” said Andrew Sliwa. “These steps are never shown in YouTube videos about 3D printing, and they can be a nightmare.”

Last but definitely not least is budget. The price of 3D printers for professionals is a lot more than for hobbyists, and no wonder: These are serious machines for serious business, highly durable and built with plenty of metal in their construction. Industrial 3D printers usually cost between $20,000 and $100,000 depending on their capabilities, and the high-end powerhouses cost a lot more. “Overall, prices are dropping as more brands come into the marketplace, but it’s still a very big investment for most processors, and they really have to be serious about 3D printing, and use it often, to justify buying one,” said Andrew Sliwa. “A printer won’t pay for itself if it’s only being used to print one or two prototypes per month.”

And it’s important to remember that buying the 3D printer is only part of the overall cost of the process. “You’ll also need to pay for electricity; maintenance; software, in some cases; and filaments, which tend to be overpriced because the cartridges that are specific to that machine,” said Kevin Han. Customers can expect to pay around $20 per kg of filament, Han added.

Finally, there’s the additional expense of buying purging filaments to clean the printer so that material doesn’t cure inside the machine and damage the system.

In the end, for a plastics processor with a need for 3D-printed parts, the answer to the question of either buying a 3D printer or ordering parts through a 3D printing service provider will be determined by its own unique circumstances, objectives, and business model. Since each route has benefits and drawbacks, what you definitely don’t want to do is act on impulse. For some, buying a 3D printer is indeed the smart decision. “Processors that can immediately identify a number of areas in which 3D printing can be part of their business have a good case for buying an industrial printer,” said Kevin Han.

For others, letting an agency take the strain is probably the better move. “You don’t have to invest in the capital equipment in-house to make the move into 3D printing, as there are agencies that have invested in numerous 3D printing machines so that you can subcontract your manufacturing to experts in the technology,” Nick Allen said. “In this way, you also eliminate the necessity to learn a whole new set of manufacturing protocols.”

For those who can’t yet make that determination, there’s a middle-of-the-road option. “You can work with a 3D printing service provider, sending them a few projects to determine whether 3D printing is a viable path for you,” Kevin Han said. “If there’s demand among your customer base, you can buy the machine and bring 3D printing in-house for quicker turnaround and increased capacity.”

When considering such a big-ticket investment, it’s crucial to weigh the pros and cons and find the best 3D printing solution for your business challenges.