The folly of the work-life balance

COVID-19 threw into disarray any semblance of a work-life balance, but right-to-disconnect policies preceded the pandemic by at least six years. 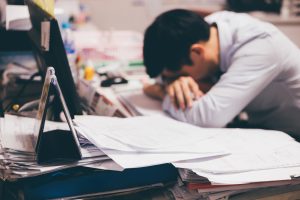 Ontario employers have until June 2 to craft a written policy on disconnecting from work. Will companies take inspiration from the television series Severance where workers volunteer to have their work self and home self surgically severed?

Although companies are unlikely to be inserting chips into the brains of their employees anytime soon, the show points to the ultimate paradox of the work-life balance: relieving the stress of work or home life requires complete submission to a powerful corporation that takes control of the worker’s body.

The pandemic threw into disarray any semblance of a work-life balance, and Ontario’s right-to-disconnect legislation reflects that working from home, for at least part of the week, has become permanent.

The pandemic was not the beginning of this disarray, however, but rather its culmination. Right-to-disconnect policies preceded the pandemic by at least six years.

Separation of work from home life

The work-life balance is about more than shutting off devices or abstaining from emails and meetings after 6 p.m. — which is the gist of Ontario’s definition of disconnecting from work.

Monte McNaughton, Ontario’s minister of labour, training and skills development, describes his rational for the policy: “I believe we should be able to separate work time and personal time. I want people to be able to spend quality time with their kids and their spouses.”

Imagining work as separate from home life has its roots in the Anglo-American suburban model: drive along newly built highways to the downtown office in the morning and retreat home to family in the suburban idyll.

One of the keenest observers of the separation of work from family life was suburban planner and theorist Humphrey Carver, who wrote in 1962 that bureaucratic work lacked the nobility of labour, so the living spaces in the suburbs should encourage people to leave their work behind, and let them be consumers and community members.

These scenes of coming to and leaving work were shot in the Bell Labs Holmdel office park in suburban New Jersey. The complex was constructed over a five-year period (1957-62) and designed by noted modernist architect Eero Saarinen, who pioneered a new genre of architecture: the suburban corporate campus.

The building is a monument to the modernist esthetics of separation: generous parking lots, artificial lakes, rustic surroundings, an oval ring road that separates cars and pedestrians and a water tower that looks like it grew right out of American technological optimism and domination.

If the suburban corporate office park was part of the evolution of work—life, futurist Alvin Toffler took it one step further in his book, The Third Wave. He wrote, overturn the 9-to-5 workday, erode the distinction between work and home life and turn the home into an electronic cottage. Basically, a worker living in a home equipped with a personal computer and networked connection has no need for an office.

Forty years before the pandemic forced us into working from home, Toffler made the electronic cottage and flexibility and flextime, the key aspects of the shift to post-industrial work.

Toffler saw it differently — post-capitalist and post-socialist — but it turned out to be ready made for the digital capitalism of Amazon, Google and Apple, whose business model depends on the erosion of boundaries: ordering goods from home, working, editing and meeting at home, all on phones, iPads and laptops.

Toffler was an influential public figure, but he was simply charting changes that began in the 1970s as corporations asked for, if not demanded, the whole you, body and soul and promoted flexibility — corporate speak for the end of permanent work and the rise of precarious and unstable employment.

Separation has always been in part artificial, particularly for women managing the household, whose unpaid labour was, and is often still, exploited and inseparable from the home. This was exacerbated during the worst waves of the pandemic. One sub-plot in Severance has women undergoing the procedure to out-source their labour — the baby birthing kind — to their surrogate self.

The irony of Severance is that the “work you” feels like you have never left the office, even though your actual body has recharged away from work.

Edelman, a global communications company, which instituted a policy of no email between 7 p.m. and 7 a.m. in 2013, offered this reason for the policy: “We really want to encourage that space because when you have a bit of recharge time, you actually are going to be a better version of yourself for our clients.”

Lumon’s philosophy is the ultimate, unresolved contradiction: united in severance. It is an apt description for the state of the work-life balance.