Techflow Design & Manufacturing is moving on up

This Ontario-based blown film machinery and plastic extrusion equipment maker has a good reason for expanding into a new, larger facility in Mississauga: business is booming. 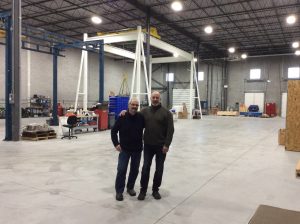 In everything from combining your loans into a single payment to getting married, a well-planned consolidation can work wonders.

And when it comes to a manufacturing plant, consolidation can offer some of the biggest benefits of all: Having everything under one roof saves money, improves operational efficiency, and consolidates systems and processes. Which is one reason why blown film machinery and plastic extrusion equipment maker Techflow Design & Manufacturing Inc. just relocated into a new, larger facility in Mississauga, Ont. The other reason? The company had simply outgrown its old location because its business is booming.

Techflow offers complete turnkey blown film extrusion systems as well as line components such as single-layer and co-ex dies, single- and dual-lip air rings, bubble cages, extruder barrier screws, internal bubble cooling systems, screen changers, haul-offs, and winders. “After 15 years in our first plant in Mississauga followed by six years in a second plant in Mississauga, we moved into our third plant in November 2018,” said Michael Bucko, Techflow’s vice president and CEO. “We need the larger facility to allow for continued expansion and to meet customer demand, in particular for our co-extrusion blown film lines in three-, five-, seven-, nine-, and 11-layers.”

Techflow was founded in 1997 by Bucko and Ricardo Rodriguez, who is the company’s president and also a Canadian blown film industry veteran and innovator. Rodriguez began his career in the 1970s as an original partner in Brampton, Ont.-based blown film powerhouse Brampton Engineering. He then went on to co-found Polysystem Machinery Mfg. Inc., a Mississauga-based blown film systems supplier; and then, in 1989, he founded blown film equipment manufacturer Addex Inc. in Brampton.

Techflow started operations in classic start-up style, operating in space rented from a local machine shop. From the beginning, Rodriguez and Bucko had a specific vision for the company. “We started with a good customer base, and we’ve been determined to keep them all and to expand it by always being available,” Bucko said.

Rodriguez’s industry bona fides notwithstanding, he and Bucko still had to prove Techflow’s worth in the early days by doing repairs on other company’s equipment or — at best — supplying small equipment of their own. “We built the business up slowly over the years, so that the repair orders became orders for die packages and air rings, which have always been our areas or expertise,” Bucko said. The company’s dual-lip air rings incorporate a special laminar flow plenum that results in a minimal amount of air turbulence and maximizes distribution of air flow, providing greater bubble stability and subsequently reducing heat generation. “And our dual air ring design allows blow-up ratios that range from 1.2:1 to 4.0:1 while still maintaining optimal cooling rates and achieving high bubble stability,” Bucko said.

As Techflow’s reputation grew, so did the size and scale of its projects. “Now we’re supplying complete turnkey lines for food packaging, industrial packaging, sanitary packaging, and agricultural film by combining our core strengths of die technology and air ring technology with other vendors that supply equipment that complements ours,” Bucko said.

And Techflow’s business is now booming. “We sold a record number of turnkey lines in 2018, and we’ve been growing our sales consistently year-over-year,” Bucko said. Techflow’s largest client base is the U.S., followed by Mexico, and the company has sales representation throughout North America — Stephen Mudgett is its Canadian sales representative — and it has strategic alliances with firms in Europe and Latin America. “Equally important to our success is our close and valuable relationships with key ancillary component and system suppliers, who are all recognized industry leaders in the segments they serve,” Bucko said.

Increased sales was why finding a headquarters to hold new equipment was a priority for Techflow as 2018 drew to a close. “The plant we’ve just moved into is double the size of our previous location, and it’s in a brand new building in a brand new industrial park; all of the infrastructure is cutting-edge, and our new plant gives us enough extra space to expand in the future,” Bucko said. “The smaller size of our previous location created logistical problems since we had to integrate various machinery and equipment in other rented locations. We’ve now consolidated everything under one roof, which is going to make us a lot more efficient.”

The larger space also means that Techflow can hire more personnel, which it needs to do to handle its increasing business. But that’s easier said than done, however. “Like every other manufacturing company, finding skilled workers is one of our biggest challenges,” Bucko said. “We’re constantly looking to find technicians and investing time and training into developing our skilled workforce.”

Which isn’t the worst problem to have, since manpower shortages only plague companies that are thriving. As to why Techflow is thriving, Bucko has a pretty good idea. “We believe in addressing a problem before a film line is shipped,” he said. “It can be tempting to deliver a line ahead of schedule to try and impress the customer, but if it’s not up to spec it’s just going to create problems down the road and you’ll lose any goodwill you’ve created. We check, double-check, and measure everything before we ship any equipment. As a result, we have very few maintenance issues.”

So from the 30,000-foot-view, Techflow is where it wants to be at the moment. But Rodriguez and Bucko still aren’t completely satisfied. “We’re happy with our growth, and we’ve taken steps to ensure that we can still keep the high level of satisfaction that our clients expect from us, but we’d like to have more things under our own control,” Bucko said. “We sometimes have to arrange for several contractors to be present at the same time for a start-up, for example, and the scheduling logistics of that can be tricky. In the future, we’d like to bring more of these technicians into our company.”

Techflow’s consolidation, then, isn’t over yet.