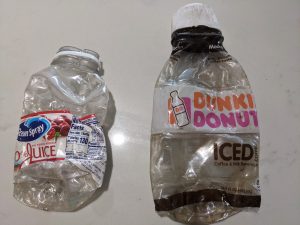 These are two plastic bottles and they appear to be the same to the human eye, but in fact, the iced coffee bottle on the right is Amasorb and the juice bottle is a form of multilayered PET. Photo Credit: Metaspectral

Plastics are currently under assault as they haven’t been in a generation, which is why the plastics industry is placing a big bet on improving recycling as part of its response.

But it’s not quite that easy. To be recycled, plastics have to be sorted to a high degree of purity so the polymers can be re-used and retain their value. But while there are only seven resin codes used by the plastics industry to indicate the general type of chemical compound used to make a product, there are actually thousands of different types of plastic with different melting points and other properties within the same resin code; the PET used in a takeout container is different from that used in a water bottle, for example.

Which makes it difficult for sorting systems – where objects whizz along conveyor belts in recycling facilities at a speed around three metres per second – to distinguish different polymer types and colours, even with near-infrared (NIR) systems that rely on the different reflectivity of polymers and distinguishes between their individual wavelength signatures to separate them. To cite just one problem, carbon black pigment interferes with the reflectance by absorbing the NIR light, making identifying the polymer virtually impossible.

And for sorting lines that don’t use NIR, the situation is much worse. Since it’s impossible for humans to differentiate between different types of clear plastic bottles with the naked eye, various types of recycled clear plastics are sold together in bulk, decreasing the quality and value of the finished recycled material.

So it’s very good news that Vancouver, B.C.-based tech company Metaspectral has just been awarded more than $300,000 in grant funding from the CleanBC Plastics Action Fund – which supports B.C. businesses creating value from used plastics by including more recycled material in product manufacturing to keep plastic out of landfills – to develop a new way of sorting waste plastics through a combination of computer vision, artificial intelligence (AI), and robotics.

Metaspectral was founded in 2019 by Francis Doumet and Migel Tissera, two business partners who got their start a year before as the creators of PixelDrive, a cloud storage platform that compressed and optimized any uploaded photo. “Metaspectral develops technology that enables real-time insights from AI using ultra-high-resolution, visible-to-infrared (hyperspectral) imagery,” said Doumet, who is Metaspectral’s CEO. “When we say ‘ultra-high-resolution’, we mean larger images in scale – i.e., spatial resolution, like 1080p or 4K – but also in the number of frequencies of light that we capture. A single image that we take can have up to 300 different frequencies of light that goes deep into the infrared range, compared to most technologies that are limited to a few frequencies of light; colour images, for example, have three frequencies that correspond to red, green, and blue. By venturing far into the visual-to-infrared spectrum and capturing close to 300 different frequencies, we can detect defects and characteristics invisible to both the naked eye and traditional thermal cameras.”

A part of this is enabled by Metaspectral’s unique, lossless compression capabilities, which can reduce file size to as little as 30 per cent of their original size without losing any data, and to as little as nine per cent of its original size with near-lossless compression. The other key component is Metaspectral’s AI capabilities, developed to sift through these ultra-high-resolution data in real time.

Aware of the above-mentioned problems that can hinder traditional NIR-based waste plastic sorting, Metaspectral saw an opportunity and reached out to Delta, B.C.-based recycler Merlin Plastics, said to be Canada’s largest plastics recycler. “We met with some of Merlin Plastics’ management at their facility, and listened to their problems and what they needed to solve for sorting plastic waste,” Doumet said. “We proposed using our ultra-high-resolution technology, and they liked the idea, informed us of the funding opportunities from the CleanBC Plastics Action Fund, and we applied and won an award.” 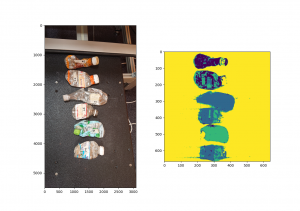 Bottles going into the AI software (left), and the classification from the AI. Image Credit: Metaspectral

By using ultra-high-resolution hyperspectral imaging, Doumet said, Metaspectral’s AI technology can efficiently distinguish among types of plastics for accurate and easy sorting. “With waste plastics sorted by NIR scanners on high-speed conveyor belts, it can be challenging to manage all of that data efficiently,” he said. “Our technology shuttles data from the sensor to a central computer, extracting vital characteristics from these images in real time. The wide gamut of frequencies that we capture allows for the differentiation between different types of plastics that are otherwise indistinguishable to the human eye and even to NIR technology, such as bottles that are 100 per cent PET and others that are multilayer PET with other material in the middle as an oxygen barrier. In short, we find characteristics of the materials that nothing else can, meaning that large quantities of plastic can be sorted and recycled more efficiently.”

Merlin Plastics is providing Metaspectral with ongoing project support in the form of recycling equipment and conveyor belts to use in testing, and the finished technology will be installed in the firm’s Delta recycling plant when the project is completed, which is slated for December 2021. “This is our first foray into post-consumer plastics recycling and we’re excited about it, and are putting a lot of capital and resources into this technology with the aim to expand on what we’ve already built,” Doumet said. “Both federal and provincial governments have set ambitious recycling targets and have endorsed policy agreements to reduce plastic waste, so we see it as a huge market for us going forward. When deployed, our technology will stimulate more regional processing capacity for recycling as more manufacturers begin using the higher-quality recycled plastics.”