The Society of Plastics Engineers (SPE) thermoforming division has announced the winners of its biennial parts competition – which include a Quebec molder – as well as the “People’s Choice” parts winner.

The awards were presented during the thermoforming division’s conference, which was held Sept. 20-22 in Grand Rapids, Mich.

This year’s winners are: 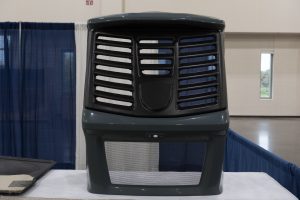 Vacuum Forming – Silver. Hammer Plastics (Mishawaka, Ind.) for a dash assembly for Class A motorhomes. The base is a custom colour, low-gloss ABS, SPE said, and the tooling layout and design accommodates for differentiation in shrink factors for the various components. The dash is shipped as a complete assembly as presented.

Vacuum Forming – Gold. Plastique Art (Sainte-Claire, Que.) for an enclosure assembly of eight thermoformed parts that house a high-end intensive care unit ventilator. “In order to meet the extraordinary challenge of designing and manufacturing an enclosure for a brand-new ventilator in only three weeks…for a customer in response to the COVID-19 pandemic…with the intention to be production ready after approval, all parts were vacuum formed to provide the best aesthetic and functionality within this short time frame,” Plastique Art officials said. “Our focus was to optimize the design for manufacturability while achieving the best fit of the parts, knowing that they had to be thermoformed on male urethane molds which would be then utilized also for production. By making the tools in-house with a staff fully dedicated to this project, we were able to meet the 10 days lead time for 11 devices ready for certification by a health agency.”

Pressure Forming – Silver. Profile Plastics (Lake Bluff, Ill.) for a removable cosmetic cover for an automatic paint dispenser. “For servicing the underlying equipment, the customer wanted a rigid yet highly cosmetic assembly that could also be removed easily by service technicians without being damaged,” Profile officials said. “Through extensive DFM collaboration with the customer’s design team, we arrived at a cover system that can be conveniently taken off and easily put back on securely.  This includes hidden fastening points to the frame.”

Pressure Forming – Gold. Ray Products (Ontario, Calif.), for a multi-part medical cart. The cart includes 12 highly-aesthetic and repeatable pressure formed parts, Ray officials said, and was previously manufactured using urethane casting, which required painting every part and limited the production quantities to 25 pieces at a time. “By manufacturing the unit with the pressure forming process and using various molded-in features, including several undercuts, we were able to significantly reduce the number of purchased components that were needed to mount the urethane parts,” they said. “This allowed for a significant reduction in total assembly time by our medical customer along with maintaining the tight tolerances they required.”

Twin Sheet – Silver. TriEnda Holdings (Portage, Wis.) for a battery cell cover that secures the inner trays filled with fragile lithium-ion batteries. The current practice is shipping from overseas to the U.S. in wooden crates that were used for one or two shipments; this new HDPE solution is able to be utilized in many more return shipments, is fully recycle-able, and is accessible to be used with both OEM robotics and manual handling as needed. “The critical design requirements achieved include a longer lasting, impact absorbing, product protection from damage and short circuiting, pack weight reduction, and elimination of expendable packaging requiring special fillers in case of damage,” TriEnda officials said.

Twin Sheet – Gold. Wilbert Plastics (White Bear Lake, Minn.) for a storage shelf for the sleeper area of an over-the-road truck cab. Manufactured using the twin-sheet process and completed using internal foam, hardware assembly, and electrical wiring, the shelf is structurally sound and can be used as an option to replace the upper sleeping bunk.

3D Printed Tooling – Gold. Catalysis Additive Tooling (Columbus, Ohio) for a 3D-printed thermoforming production tool for forming pallets. “This tool is half the price of a traditional metal tool…and is 100 per cent porous, allowing the tool to pull a more consistent vacuum on the part,” company officials said. “This tool is [also] able to withstand thousands of parts. This means that the longevity of a tool isn’t dependent on price and lead time, which is the major drawback of other tooling materials such as wood and plastics.”

Parts Produced with Automation and New Technology – Gold. Hagans Plastics (Grand Prairie, Tex.) for the Chinook forward drip pan. This part replaces an aluminum pan due to both increased strength and weight reduction. The material is a PEEK/Kevlar non-woven fibre, and the panel was redesigned to include more head room for the navigator. The part has now been approved to be included in all new Chinook helicopters manufactured by Boeing and spares for existing helicopters currently in use.