The made-in-Ontario Mully Cup effectively eliminates the pole-golfer contact, reducing the spread of COVID-19. And it could become the new normal on the greens even after the pandemic. 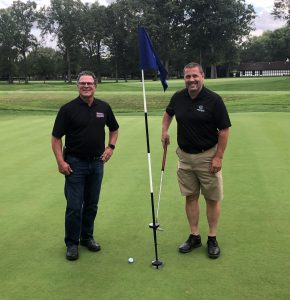 Golf is famously called a good walk spoiled, but after weeks of orders for people to combat the COVID-19 pandemic by staying inside and avoiding contact with others as much as possible, the reopening of Canada’s golf courses in mid-May must have felt like hitting a hole-in-one for even the worst duffers in the sport.

But there were conditions attached: each province had new guidelines designed to maximize physical distancing and limit the number of contact points where the virus can be transmitted, including prohibiting reaching into the hole after sinking a putt. To satisfy this last guideline, two veterans of the tool and mold industry in Windsor, Ont. have devised a plastic, touchless ball retrieval system that fits both regulation and tournament poles, and installs simply by wrapping around the flagstick, allowing players to use a putter to lift up the top plastic disc and release the ball.

BORN OUT OF NECESSITY

Called the Mully Cup, the original idea for the device was conceived by Frank Cirino, president of Lomar Machine Repair in Amherstburg. Cirino is also a member of the golf course committee at Pointe West Golf Club, and was involved in meetings in April around how to safely reopen the course following mandated protocols established by the Ontario government. “We had to come up with an idea on how you could retrieve the ball out of the hole without touching it or the flagstick,” Cirino said. “We considered using touchless flags and even pool noodles that block the hole, but all of these options seemed too disruptive.”

Looking for an alternative, Cirino devised his own rough idea for a hands-free ball retrieving device and contacted a client for help in developing it: David Thibert, partner in mold maker Mega Mold International in Maidstone and a member at Essex Golf and Country Club. “I thought Frank had a good basic idea after meeting with him, and I brought some of the staff at Mega Mold into the project; it came along at the right time for us, in that we had machine time available in our shop,” Thibert said. “We developed a few product designs and modeled them up, and then refined it down to a specific design. We made it into a 3D model, put it in place in a mold, and built the mold around it.”

An early design challenge arose when Thibert and his team and Cirino – who visited Mega Mold daily to follow the project’s development – all realized that since some flagsticks are a uniform half-inch in diameter while others are tapered, they needed something adjustable. “We solved this by modifying the Mully Cup to suit both flagstick styles with an interchangeable clip at the top,” Cirino said.

Side view of the Mully Cup.

Picking the right material for the job was another challenge. “After some deliberation, we selected a PC/ABS,” Thibert said. “It has the right combination of rigidity, strength, and soft feel – we didn’t want the Mully Cup to make a clanging sound when a golfer touches it with the putter, and we also don’t want it to scratch or damage putters like metal ball retrieval devices can.”

A final design feature of the Mully Cup is 360° ball entrance with no interference. “There’s nothing that obstructs the ball from dropping, which is the one thing that golfers and course operators all demand in a ball retrieval system,” Cirino said.

With the product ready for production, Cirino and Thibert contacted Injection Technologies Inc., a full-service Windsor-based injection molder, to manufacture the parts. “Injection Technologies specializes in mold tryouts, and they’re very well known in the Windsor area – my own relationship with them goes back 25 years,” Thibert said. “They’re building a bank of Mully Cups for us so that we’ll have enough to satisfy virtually any amount of orders. They’ve been a tremendous help and we couldn’t have done this without them.”

Having gone from a rough idea to a finished design ready for molding in approximately one week, the Mully Cup is now catching on at an equally fast pace. The device is being distributed by Winnipeg-based Bayco Golf, and is currently being used at over 100 golf courses across Canada – including Thibert’s own course, which started play in mid-May with another metal version of a touchless device but switched to the Mully Cup shortly after. And the international market is beckoning as well. “Bayco Golf recently sent samples down to clubs in the U.S. and we’re now getting orders from some of these courses,” Cirino said.

Looking ahead, Cirino, Thibert, and the owners of Bayco Golf all see a market for the Mully Cup even after the COVID-19 crisis is over. “It speeds up play, allows people to get their ball out of the cup without bending over, and fits in with a recent rule change that states the flagstick doesn’t have to be removed when putting,” Cirino said. “We think this item will be the new normal in golf.”