Researchers at Washington State University say they've found a cost-effective way to convert PE-based products into jet fuel and lubricants, and in a fraction of the time current plastics recycling methods take. 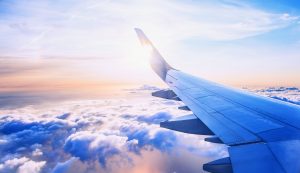 In a lot of ways, commercial air travel isn’t what it used to be – longer check-in lines, more cramped seating, smaller meals – but here’s a big potential improvement: a new catalytic process developed by Washington State University (WSU) researchers is said to efficiently convert waste polyethylene-based products into jet fuel and high-value lubricants, and in a fraction of the time current plastics recycling methods take.

According to the researchers at Pullman, Wash.-based WSU, the technology is able to convert about 90 per cent of the plastic within an hour at moderate temperatures, and it can be fine-tuned to create specific products.

Led by WSU associate professor Hongfei Lin and graduate student Chuhua Jia, the project seeks to lessen the cost and environmental footprint of plastics recycling. “In the recycling industry, the cost of recycling is key,” Lin said. “This work is a milestone for us to advance this new technology to commercialization.”

The problem being tackled by Jia and Lin is a familiar one: Only about 10 per cent of plastic in the U.S. is recycled every year; and PE, also known as #1 plastic, is the most commonly used plastic, used in a huge variety of products from plastics bags, plastic milk jugs and shampoo bottles to corrosion-resistant piping, wood-plastic composite lumber and plastic furniture.

For the process, the researchers used a ruthenium on carbon catalyst and a commonly used solvent. They were able to convert about 90 per cent of the plastic to jet fuel components or other hydrocarbon products within an hour at a temperature of 220°C or 428°F, which is more efficient and lower than temperatures that would be typically used. Adjusting processing conditions, such as the temperature, time or amount of catalyst used, provided the critically important step of being able to fine-tune the process to create desirable products, Lin said.

Now, with support from the Washington Research Foundation, the researchers are working to scale up the process for future commercialization. They also believe their process could work effectively with other types of plastics.

The work, which was done in collaboration with researchers from the University of Washington and Pacific Northwest National Laboratory, including Professor Jim Pfaendtner. It was funded by the Washington State Research Foundation and the National Science Foundation.