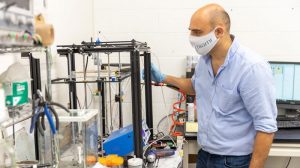 Mechanical engineer Emrah Celik has invented a new 3D printing method that uses mechanical vibration to prevent the fibres from clustering together during the critical extrusion phase. Photo Credit: University of Miami

When it comes to aircraft parts, lighter is obviously better as long as you’re not sacrificing strength and durability. A researcher from the University of Miami, Florida has now invented a new 3D printing technique that can create a lightweight, yet strong, composite for the aviation industry.

Emrah Celik, an assistant professor of mechanical and aerospace engineering in the College of Engineering at University of Miami, was developing a theory that involved adding carbon fibres to thermoset composites in order to create a new type of material that’s lighter, yet stronger than aluminum and steel. But the roadblock was in the 3D printing process: during the fabrication phase, the fibres tended to clump together, clogging the printer’s nozzle.

As a solution, Celik invented a new 3D printing method – called vibration-assisted additive manufacturing – that uses mechanical vibration to prevent the fibres from clustering together during the critical extrusion phase.

“I also used shorter fibres with chemically modified surfaces to minimize the attraction between the fibres and maximize the adhesion to the thermoset matrix,” Celik said. “Compared to traditional composite manufacturing, this allows us to fabricate thermoset composites in any shape and size, and with unprecedented mechanical performance.”

Celik compares the process of designing and manufacturing the new composite to preparing a gourmet soup, and credits his graduate assistant, Nashat Nawafleh, for playing an instrumental role in the procedure. “All the ingredients and spices must be just right,” Celik said. “Nashat worked endless hours in the lab optimizing the fibre type, fibre surface chemistry, and printing parameters to finally optimize the entire process to make the recipe just right.”

Funded by the United States Air Force, Celik’s research has the potential to revolutionize the aviation and space industries, allowing aerospace engineers to design craft that are lighter but strong enough to carry heavier loads.

The vibration-assisted additive manufacturing technique to make the composite possible is just as groundbreaking, Celik said.