Say hello to your little friends

Collaborative robots are inexpensive, versatile, and easy to program. And by working safely alongside human operators, they can revolutionize the way you handle small-batch manufacturing and ever-shortening product cycles. 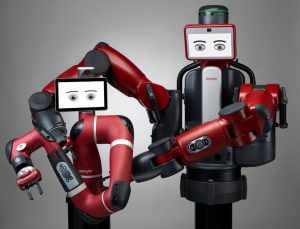 Ever since the Terminator went on a rampage in the 1984 sci-fi classic, robots have had a bad reputation from a human interaction point of view. It doesn’t help that, on factory shop floors around the world, industrial robots are generally kept behind cages, sending the message that they’re dangerous and unpredictable.

There’s no question they can be dangerous, especially in situations where high-speed robots are moving heavy payloads faster than the eye can see. But in another way it’s a perception of automation that’s almost as outdated as those mid-1980s mullets also on display in The Terminator. In the past couple of years, a new kind of robot has done away with cages and fences altogether. Collaborative robots — or cobots — are robots that work as assistants alongside human operators; and they might just turn the world of industrial robotics upside down by putting automation within reach of many small and medium-sized companies for the first time.

A discussion of collaborative robots has to begin by talking about what they aren’t. For one thing, they’re not a replacement for traditional high-speed industrial automation. “Collaborative robots can’t compete with other six-axis industrial robots in terms of speed or payload capacity, and they’re not meant to,” said Craig Tomita, an area sales manager with Universal Robots USA Inc., which offers the UR3, UR5, and UR10 cobot models. “A traditional industrial robot is expensive, challenging to program, and has to be surrounded by a fence to protect workers. The whole point of collaborative robots is to get away from that.”

Think of it this way: If industrial robots are mainframe in the computer industry — robust and efficient, but needing expert programmers to change or update — cobots are user-friendly laptops with arms. “The repetitive jobs that can be automated using collaborative robots are essentially unstructured tasks, where it’s difficult or too expensive to use traditional industrial robotics; collaborative robots can be used in these areas without fencing, which means no additional space is needed on the shop floor,” Tomita continued. How so? “The defining feature of collaborative robots is that they can work safely in close proximity to humans, either by force-limiting to avoid injury if they touch or by sensors that prevent touching, or by a combination of both.”

Safe operation is, indeed, the biggest priority of the collaborative robot industry by a factor of about 10, and there are 2 basic approaches to making cobots safe. The first is to make the robot itself inherently safe. “If any one of our collaborative robots makes contact with a human co-worker, it immediately stops so the worker doesn’t feel anything more than a gentle nudge,” said Jim Lawton, chief product and marketing officer with Rethink Robotics Inc., which makes the Sawyer and Baxter collaborative robots. “The robots have rounded surfaces to help make that nudge even gentler, and we’ve also eliminated pinch-points.” Redesigning the end-of-arm tooling was important, too. “If the robot and operator are handing parts back and forth, the tooling needs to be designed so that, if the person gets their fingers caught, they won’t be hurt,” Lawton said. “There are several styles of grippers that grip firmly enough to hold the part but gently enough to avoid injuring the operator.”

Collaborative robot makers have even gone so far as to make the robots look friendly. “Some cobots appear almost cartoon-like,” said Nick McDonald, application manager for robotics with ABB Inc., which makes the YuMi dual-arm collaborative robot. “This is an intentional design feature to help put the operators at ease, and it works.” Extreme examples include Rethink Robotic’s Sawyer and Baxter cobots, which come with big, friendly-looking graphical eyes on the displays on their heads.

And limiting both the speed and the payload are also factors in making collaborative robots safer. The ideal speed for a collaborative robot is human-speed, the suppliers say, and the typical lift load is in the range of 22 lbs, although Fanuc’s CR-35iA cobot can handle a 77-lb payload. “If the cycle speed is too fast or the payload too heavy, a human operator could get hurt in a fenceless environment,” Jim Lawton said. 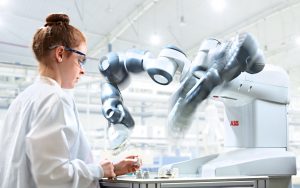 The second approach for ensuring safety is to double down on the sensors that allow a robot to react to the presence of a human on an intercept course before a collision takes place — an approach that also allows some collaborative units to be used in slightly faster and heavier applications. “Modern 3D area scanners are extremely sensitive and discriminating, detecting not only the presence of a person, but their location as well,” Craig Tomita said. “This allows the cobot to slow down, work around the person, or stop as the situation demands to maintain safety. When the person moves away, the cobot automatically resumes normal operation.”

Safer human-robot collaboration is one benefit cobots are bringing to manufacturing; easier robot programming is another. Whereas traditional industrial robots require advanced computer programming skills, cobots can learn through lead-through programming. “Human workers can show a collaborative robot what to do simply by moving its arm through the appropriate paths; the robot will then remember these movements and repeat them,” said Peter Fitzgerald, general manager of Fanuc Canada Ltd. “It’s a revolutionary learn-by-doing approach that any shop floor operator can master.”

By taking the difficult, time-consuming job of programming out of the equation, collaborative robots potentially offer more flexibility than their high-speed industrial counterparts. “Because it can be programmed and then reprogrammed so easily, a collaborative robot can be moved from one short-run production line to the next, to either work alongside a human operator or replace that operator,” said Jim Lawton. Size makes a difference here, too, since most collaborative robots are human-size at most, and can be adjusted to either stand tall or be small enough for mounting on a tabletop. “This versatility makes collaborative robots ideal for smaller factories where the norm is more about lower volumes of customized, lightweight products and less about mass production,” Craig Tomita said.

Given this upside — smart, safe robots that can work alongside people in a wide range of industries and processes — it’s no mystery why sales of collaborative robots are entering the stratosphere. According to capital goods analyst Barclay’s, the global cobot market is set to grow from US$116 million last year to a whopping US$11.5 billion by 2025 — roughly equal to the size of the entire industrial robotics market today. And in North America’s plastics industry, orders for collaborative robots grew 25 per cent in 2015 over 2014. Affordability is probably another reason for the growing popularity of cobots: The price of a unit can be as little as $10,000, although typically they cost two to three times that. “In addition to a low price, cobots also have a very quick return-on-investment because they’re so simple to install — there’s no need to reorganize the factory or even put up fencing,” said Peter Fitzgerald.

But low cost and fast ROI might also be reasons, the robot makers say, why some operators worry about cobots putting them out of work. Truth is, they’re probably more likely to get struck by lightning. “Industry-wide, collaborative robots are actually helping to create more and better jobs as they bring manufacturing home and allow smaller operations to expand,” Fitzgerald said. “And on an individual shop basis, the cobot is almost always intended to assist, not replace, the production worker.” And when a cobot does replace a worker, the vendors point out, it’s usually to take over the repetitive, pick-and-place or stack-and-pack operations that people dislike doing anyway. “The workers are then free to do the jobs that require more thought and are less physically demanding,” Fitzgerald continued. 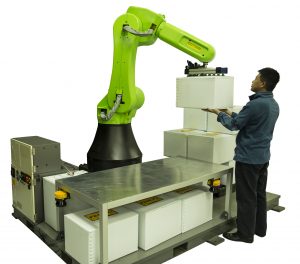 Another job the human workers won’t have to do is gather scut work production data — which is just as well, because they’re usually terrible at it. Cobots, on the other hand, excel at this, which makes them real-world examples of the Industry 4.0 phenomenon we’ve been hearing so much about lately. “Cobots are not only hardware but also data acquisition devices,” said Jim Lawton. “If each joint has a sensor, by the very course of doing what it’s doing, the robot is collecting cycle time data, which can then be combined with other kinds of information — customer support data, warranty data, field failure data — that a manufacturer can use to improve its operations. You really can’t collect cycle time data from human operators; it’s been tried, but the results are usually very poor.”

Lawton believes that while collaborative robots will be used for substitution now, eventually they’ll be key components of cyber-physical systems that communicate and cooperate with each other and with humans in real-time. “In future, cobots will be able to learn from their own experiences and improve the way they operate,” he said. “This data exchange is a cornerstone of the ‘smart factory’, which is what Industry 4.0 is all about.”

In the end, it’s worth repeating: Collaborative robots aren’t going to replace traditional industrial automation. “Cobots aren’t the solution to every production issue,” said Nick McDonald. “There will always be production lines that require fencing because the automation is dangerous to shop floor workers, and there will always be dedicated, high-volume production lines that are better served by high-speed servo robots.”

But here’s the thing: While industrial robots are very good at handling automated tasks, more than 90 per cent of tasks in factories are not automated. “To automate that 90 per cent, manufacturers require automation that can work with humans and operate in the semi-structured environment of a factory floor,” Jim Lawton said. Collaborative robots — safe, versatile, and user-friendly — are definitely up for the job.

And they’ll never call in “sick” from the golf course.