Not even a global pandemic can stop this Quebec-based rotational molder’s carefully laid expansion plans. 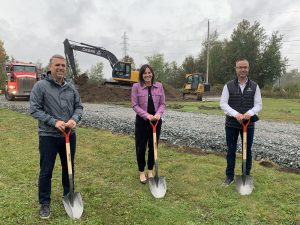 Slow and steady wins the race is a phrase that sounds a bit hackneyed these days, when almost everyone expects instant results, but the concept still holds true, as the arc of Quebec-based rotational molder Rotoplast Inc. demonstrates. The company, which is located about 70 kilometres east of Montreal in East Farnham, broke ground in September on a $2.5-million project to expand its plant by 40 per cent to meet growing demand from existing customers, and is also adding new machines and other equipment – and it’s all part of the owners’ plan to achieve slow, steady growth.

Rotoplast was founded in 1994, but its modern story really begins when it was acquired in 2006 by a new ownership team that included Sébastien Daudelin and Mathieu Arsenault. “When we first started, we invested some private equity into Rotoplast to expand it – but we wanted to do it slowly, because we never wanted to grow too quickly and lose control,” said Arsenault, the company’s vice president. “In 2015, Sébastien and I bought out all of the other partners, and we’ve been running the company ever since – I’m in charge of sales and development and Sébastien, who’s the president, handles production and human resources.” At present, about 95 per cent of Rotoplast’s East Farnham location work is custom subcontract molding for a range of markets: consumer and electrical products, food-processing containers, agricultural and industrial tanks, medical furniture, and materials handling pallets. It also has a nautical division that manufactures a propriety line of kayaks and pedal boats.

As for most rotomolders, the economics of shipping mean that Rotoplast services customers that are relatively close to it, geographically. “Finished rotomolded parts tend to be quite big and therefore expensive to ship, which creates a bit of a shipping barrier – for example, we can’t really compete, price-wise, for business in Wisconsin against rotomolding shops located in Wisconsin,” Arsenault said. “So our customers tend to be within about a 750-kilometre radius of us.”

Rotoplast added to its product portfolio big-time in 2016 when it acquired Pickering, Ont.-based ACO Container Systems, which rotomolds a variety of plastic storage tanks and other containers. And again, it was part of the plan. “In addition to expanding our own business, from day one we also wanted to grow by acquisition, and having ACO Containers as a division of Rotoplast helps with that,” Arsenault said. Rotoplast and ACO have combined annual sales of about $12.5 million. “Our target is to double the total incomes within the next five years,” Arsenault added.

The expansion of the East Farnham manufacturing plant – which will add 16,000 square feet to the 40,000-square-foot facility – is the latest move in Rotoplast’s growth strategy. “We’ve quadrupled our sales since 2006 and demand is constantly increasing, so the decision to invest was a must for us to enable our continued growth,” Arsenault said. The extra space will help accommodate a new shuttle machine with a four-metre spherical swing, bringing  the number of rotomolding machines at that location to five; ACO Containers has two more machines. “We’re also automating production at East Farnham by adding a robotic cell and moving to Industry 4.0 technology, using digital technology to coordinate automated manufacturing with supply-chain processes,” Arsenault said. “We’re aiming to become an Industry 4.0 factory.”

Rotoplast currently employs 65 workers in East Farnham and 20 in Pickering, and the expansion will create an additional 20 jobs in East Farnham – which is why the expansion will also include a new employee cafeteria, locker room, outdoor patio, and lounge space. “Good employees are in short supply these days, and we know that to attract new talent we have to give them a good climate to work in,” Arsenault said.

RECOVERING FROM THE SHUTDOWN

But even the best strategy can’t plan for everything, of course – the ongoing pandemic temporarily threw a wrench into Rotoplast’s day-to-day business and its overall business strategy, as it did for every other manufacturer on the planet. “We closed for seven weeks during the initial lockdown in Quebec last year, and we’re still trying to catch up because demand for leisure products and other power sports items has remained very strong,” Arsenault said. “And we were supposed to start the East Farnham expansion project a year ago, but it was delayed until now, again because of the pandemic.”

Now, however, with the expansion underway – and scheduled for completion by March or April 2022 – Rotoplast’s plans are back on track, and the owners are once again on the lookout for potential new acquisitions. “We plan to keep growing slowly but steadily,” Arsenault said. “Our customers are very loyal – we haven’t lost any yet, and as the only ISO 9001 certified rotomolder in Quebec, I think we have a good reputation in the market.”