Rotogran International is getting very big in granulation

Booming sales, a recent relocation into a bigger plant, and a deep dive into making larger granulators all signal the start of a new era for this Southern Ontario-based size reduction equipment manufacturer. 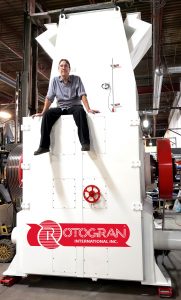 Sir Isaac Newton’s Third Law says that for every action there’s an equal and opposite reaction. And it doesn’t just hold true for physics. Take, for example, the plastics industry, where the action of implementing bans on single-serve items such as bags and straws is creating a growing reaction towards using more post-consumer plastics.

Which is where another law – the one about unintended consequences – comes in: The use of more post-consumer plastics necessitates more comprehensive recycling, thereby boosting the fortunes of certain shops that were founded to facilitate plastics production. Case in point? Rotogran International Inc., which has just relocated from its original headquarters in Vaughan, Ont. into a much larger manufacturing plant in the nearby town of Bolton.

Rotogran is a North American manufacturer of size reduction equipment for the plastics and recycling industry, custom designing and building granulators, fines separators, evacuation systems, and feed conveyors with metal separators. The company was founded in Vaughan in 1982 by entrepreneur Mike Mikellides and then acquired on Mikellides’ retirement in 2013 by Mike Cyr, who was then Rotogran’s vice president of sales.

Cyr’s ambitions had been pent-up, and he made substantial changes to the company beginning on day one of his ownership. “As soon as I bought Rotogran I began expanding the product line to fill in what I saw as the gaps in our size reduction range,” Cyr said. “We doubled the number of granulator models available, making the new models wider and also lower to go underneath shredders in stacked systems. We added new models to our WO-14 medium-duty granulator series, for example, including the WO-1424, WO-1430, WO-1442, and WO-1456 units. And where we only had two in the 18-inch cutting circle range we introduced three more. At the 26-inch cutting circle range we added two additional models as well. And we continue to expand our monster Titan series granulators with 36-inch cutting circles in wider ranges of widths and higher production capacities.”

Cyr had actually been planning these and other changes since before he even joined the company. “My relationship with Rotogran began in 1987, when I became a sales rep for their line while working as the national sales manager for a larger company,” he said. “I was a machinist by trade, and worked with Mike Mikellides to bring Rotogran’s early units up to my own standards.” An example, Cyr continued, is when Rotogran developed its first granulator with quick and easy access. “I designed the system myself using CAD and had Rotogran build it,” he said. “We introduced it at an NPE trade show, and I joined Rotogran as vice president of sales in 1992. I feel as though I was born to sell, and my passion for Rotogran products has always been so big that I purchased the company as soon as the opportunity arrived.”

The investments in new machine sizes quickly paid off. “We’ve doubled our sales since 2013, and we outgrew our original headquarters in Vaughan, which only had 14,000 square feet of space and only had machine capability for small machining, requiring us to outsource the balance,” Cyr said. Which is why in November the firm moved into a 20,000-square-foot plant in Bolton. “We looked at many areas in Southern Ontario and finally picked Bolton, in the town of Caledon, for a number of reasons,” Cyr said. “It has low taxes, good infrastructure, and close proximity to the airport and GTA. I was also very impressed with Allan Thompson, the mayor of Caledon, during my talks with him before we relocated, and with his vision for the Bolton area. Bolton is becoming a business and manufacturing hub: Amazon Canada, Canadian Tire, and Mars Canada are all setting up facilities here, and we want to be part of that.”

And the company has taken to Bolton like the proverbial duck to water. “We work closely with Humberview Secondary School in Caledon as a proud sponsor of their ‘Alpha Dogs’ robotics program,” Cyr said. “We recently hired an electrical and millwright apprentice from Humberview who is learning valuable job skills while developing his career.”

If you’re wondering why Rotogran needed a larger HQ in the first place, look no further than the recycling boom. With governments in more than 60 countries having introduced levies and bans designed to outlaw single-use plastic products, recycled plastics may well be the future of our industry – which spells a huge and growing demand for size reduction equipment. “We’re definitely moving into recycling as that industry expands,” Cyr said. “China has stopped accepting recycling from other nations, which means we have to keep recyclables in North America and find ways to use them here. And the North American recyclers who have to deal with this material all want heavy-duty granulators that can run at maximum capacity 24/7/365. We’re fortunate in that Rotogran has always specialized in building these kinds of granulators, so we know how to do it right.” 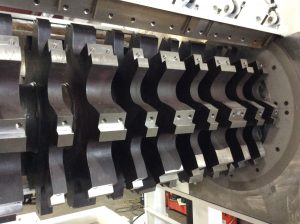 And not all of Rotogran’s recycling customers are handling plastic, which means that the company is expanding beyond its prime directive for the first time. “Our machines are now being used for recyclables such as carpeting, wood, and rubber,” Cyr said. “Non-plastics are now a growing part of our business, and we are now custom-building machines for carpets, which have slightly different requirements than granulators for common plastics – they have different cutting geometries, for example. But we’ve always custom-built all of our machinery exclusively from North American components, so it’s not a problem for us. Recyclers want maximum throughput, but they also want enhanced safety guarantees than a small-size plastics processor that only runs the granulator at maximum capacity for very short periods of time. We can add double redundant relays, rotor brakes, hopper locks and anything else the recycler needs to guarantee safe operation.”

The recycling boom explains most, but not all, of the company’s recent success. “We’ve also expanded our plastics processing customer base by including white label manufacturers,” Cyr said. “And from the day I took over the company, we’ve been partnering with shredder maker Vecoplan LLC to supply stacked size reduction systems, and being associated with them gives us added credibility. Vecoplan has made Rotogran its house brand in the U.S.”

The larger footprint of the Bolton plant allows the company to perform most of its machine assembly in-house. “The small size of our old plant in Vaughan limited us to doing only small machining work; for larger machining jobs, we had to outsource,” Cyr said. “We now have enough space for a dedicated machining area, which lets us build bigger Titan machines and retain control of our machining.”

And there’s also enough room for the company to continue its long-standing refurbishment program. “We’ll take any Rotogran granulator, no matter how old, and totally refurbish it for the customer,” Cyr said. “Some of our competitors just repaint the unit and call that a refurbishment; we replace the hardware, the bearings, and add new components, so that it really is almost new.”

The Bolton plant also has a second storey – currently vacant – that the company plans to move into as part of the second phase of its expansion, which also includes increasing its present staff size of 25 workers. “We plan on utilizing the upper portion of the building by expanding our engineering department and/or introducing a standalone electrical department,” Cyr said. “If necessary, we can start a second shift for new hires. The expansion we have in mind needs new people and new ideas.”

Rotogran also used the occasion of its new facility to install an ERP system – the company’s first. “We previously used a variety of software programs to run our business, which wasn’t ideal,” Cyr said. “We now have a Genius ERP software system that allows us to optimize production, reduce costs, and streamline operations.”

The impetus behind investing in the new ERP software came from Cyr’s son Cole, a business student who recently began working part-time for the firm. “Cole basically grew up in the industry, and he’s always wanted to join Rotogran at some point,” Cyr said. “His involvement gives me more time to focus on the part of the business that I like best, which is selling.” 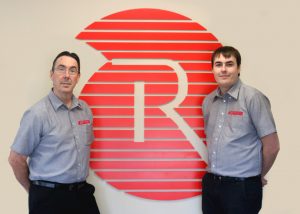 The plan, Cyr said, is for Cole to manage more and more of Rotogran as it heads into the future. And he definitely has some ideas. “I see us becoming even more involved in making machines for recycling, because it’s going to keep becoming more relevant; the added benefit is that the granulators we design for recycling are durable enough to handle any size reduction application that a plastics processor can throw at it, so we’re actually improving our position in both sectors,” Cole Cyr said. “We’re also planning to make improvements with our machines’ data collection and connectivity features so they’ll fit into an Industry 4.0 factory, which more of our customers are operating.”

One thing that hasn’t changed from one Rotogran location to the other, Mike Cyr said, is the company’s personalized, service-oriented approach. “We strongly believe in connecting and engaging with our clients,” he said. “We don’t close an order until I’ve personally followed up with the customer to ensure they’re satisfied with the purchased product and the service provided. Some people call it old-fashioned, but I think it makes more sense nowadays than ever: We build granulators but we don’t use them, so we don’t actually know how the machines performing in real-world environments. Talking to maintenance workers and machine operators to get their feedback is vital.”

Call it Rotogran’s law for succeeding in the reclamation and recycling industry.