The Brampton, Ontario plant of this U.S.-based injection molding firm has just embarked on an ambitious four-year growth plan, and has the strategy and the resources to make it happen.

A famous ad jingle claimed that “Good things grow in Ontario,” and Revere Plastics Systems LLC is hoping to grow its business at its manufacturing plant in the Southern Ontario city of Brampton.

Known primarily for making products for the appliance sector, the Clyde, Ohio-based injection molder is in the midst of a major push into other end markets as part of an ambitious strategy to double its revenue over the next four years. The diversification plan – which also includes investing in more large-tonnage injection molding, automation and other technology – has already been enacted at Revere Plastics’ three plants in the U.S., and the Brampton facility is next in line.

Revere Plastics should probably be better known than it is. With estimated sales of US$215 million, Revere Plastics has four plants — in Clyde; Poplar Bluff, Mo.; Jeffersonville, Ind.; and Brampton – and 275 presses, ranging from 25 to 1,880 tons. Adept in a wide variety of molding processes – including stack, two-shot, and overmolding, as well as a long list of secondary operations – the firm employs about 1,000 workers in total, and has customers in appliances, automotive, housewares, outdoor power equipment, medical, and electronics. “We’ve always been a major player in injection molding, particularly in appliances – our plant in Clyde is just down the street from a major Whirlpool plant, for example,” said Doug Drummond, Revere Plastics’ director of business development and marketing. “Whirlpool and General Electric are our biggest appliance customers, and we also have big customers in the outdoor power equipment sector.”

But as sometimes happens, the firm got into a rut over time. Founded in 2005 as the plastics division of Revere Industries LLC, an Indianapolis-based company that also had metal operations, Revere Plastics was taken over in 2009 by Santa Monica, Calif.-based investment firm Tennenbaum Capital Partners LLC. “Sales remained consistent under the new owner, but the company lacked unity and an overall focus, and the four plants operated almost independently of each other,” Drummond said. “We definitely weren’t maximizing our synergies.” And it didn’t help that the appliance market was changing rapidly. “For years now, offshore companies like Samsung and LG have been taking a bigger and bigger share of the North American market,” Drummond said.

In 2013, Tennenbaum Capital finally started to make changes, including fresh capital investment and the push to diversify the customer base. “Our plant in Jeffersonville, in particular, had too much open capacity and required serious attention, and that was the new management’s focus for the first three years; I was recruited from an automotive supplier company during this time to help oversee that process,” Drummond said. ”The Brampton plant was profitable and it had a few key customers that it kept happy, but it was basically in a holding pattern from a business development perspective until we turned our attention to it last year.”

In one of Revere Plastics’ main initiatives for 2017, the 60,000-square-foot Brampton plant has been targeted for aggressive business growth and an internal overhaul. A first step was to bring in a new general manager, Gus Shaar. “We also hired a new salesman with the specific goal of growing the sales in the Southern Ontario region,” Drummond said. 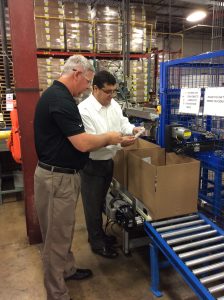 One of Shaar’s first jobs, in turn, was to implement a lean manufacturing program, beginning with a redesign of the Brampton plant’s shop floor. “We began by cleaning up the aisles; empty skids used to be all over the floor, and we’ve now stacked them neatly in designated areas,” Shaar said. “We also painted coloured lines and symbols on the floors to indicate aisles, work areas, and storage areas: blue lines indicate raw material storage, white is where the employees work, yellow designates safe areas where forklifts cannot cross, and green indicates areas for finished goods. It’s all part of implementing a strict lean manufacturing process that allows us to work faster and smarter, not harder, and we’ve improved our productivity by six per cent as a result.” 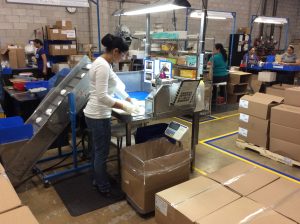 The look of the shop floor has changed in other ways, too. “We have purchased several new injection molding machines in the last 12 months, giving us a total of 42 presses in Brampton, with 600 as our largest tonnage,” Drummond said. “We have the ability to produce not just a plastic part, but a complete assembly, which is why over 80 per cent of our overall sales as a company has to do with adding value to a product, for example through welding – we can do six different types of welding – or decorating,” Drummond said. “This is the kind of new business we want, as opposed to simply molding a part. If we can grow the amount of complex, value-added products we manufacture, our sales in Brampton will increase while bringing more value to our customers at the same time.”

The company’s plan to double its revenue over the next four years is as carefully crafted as its shop floor makeover. “The three major industries that we are focussing on are automotive, appliance, and outdoor power equipment,” Drummond said. “We’ve done our research and know who to call on in Southern Ontario to build new relationships; and we’ve also joined industry associations such as the Automotive Parts Makers’ Association and the Outdoor Power Equipment Institute, which will help to raise our profile and put us in touch with an even wider range of potential new customers.”

The message that Revere Plastics is trying to put out, Drummond continued, is that the company’s technologies help separate it from its competitors. “We have more to offer than just a price for a part – we can supply a complete assembly,” he said. “We have expertise in design optimization, tooling, screw types, and automation. In addition, we have low overhead, meaning we can provide cost advantages for our customers. And we’re very good at problem solving.”

Another strength, Drummond added, is that the Brampton plant can tap into resources from Revere Plastics’ three U.S. facilities. “Revere Plastics has over 30 engineers across its plants in Clyde, Poplar Bluff, and Jeffersonville, and their expertise is available to us,” he said. “We can even move equipment from the other plants if necessary. We have complete buy-in from management: If we find the right customers and the right opportunities, the company will back us up all the way.”

The results of the company’s push into new markets are already beginning to show. “We implemented the growth strategy in Brampton one year ago, and we are already seeing a rise in RFQ packages from customers, and are getting more and more customers that want to tour our facility,” Drummond said. “These are the things that lead to more sales.”

Perhaps the only fly in the ointment is that, like many plastics processors that are in expansion mode, Revere Plastics’ Brampton plant is faced with challenges when it comes to hiring new workers. “We’ve automated wherever possible to make our workers’ jobs easier, and to free them to do more cognitive work,” Gus Shaar said. “But there are some jobs we can’t automate: we’re always on the lookout for new set-up workers, for example, and are in touch with local universities and technical colleges to find students that we can bring into our team and provide additional training for. We invest a lot of money in training”

In the end, there are worse problems to have than needing new workers to keep up with new business. “Revere Plastics has been around for awhile, but we’re not the same company we were a few years ago,” Drummond said. “We have an ambitious growth plan and the resources to achieve it.”