The material for craniofacial bone grafts can facilitate cell regrowth and be tailored to an individual's unique face and skull structure. 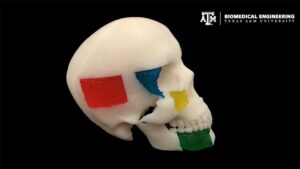 Made up of 22 bones, each of which has subtle variations, every human skull has its own unique facial profile – which is why repairing the shape of skull defects, in the event of a fracture or a congenital deformity, requires a technique that can be tailored to an individual’s face or head structure.

Using a new synthetic polymer, researchers at Texas A&M University have combined 3D printing, biomaterial engineering, and stem cell biology to create superior, personalized bone grafts. When implanted at the site of repair the grafts will not only facilitate bone cells to regrow vigorously, but also serve as a sturdy platform for bone regeneration in a desired, custom shape.

With funding from the National Institutes of Health and the National Science Foundation, the researchers developed a synthetic polymer that is both bioactive and mechanically strong. These materials are also 3D-printable, allowing custom-shaped craniofacial implants to be made that are both aesthetically pleasing and functional.

Hydrogels, a class of highly elastic and hydrated materials, are usually a preferable alternative to metal implants but have a known weakness: The softness of the hydrogels compromises the mechanical integrity of the implant and the accuracy of printed parts. To increase the stiffness of the hydrogel, therefore, the researchers developed a nanoengineered ionic-covalent entanglement – or “NICE” – recipe that contains just three main ingredients: An extract from seaweed called kappa carrageenan, gelatine, and nanosilicate particles that both stimulate bone growth and mechanically reinforce the NICE hydrogel.

First, they uniformly mixed the gelatin and kappa carrageenan at microscopic scales and then added the nanosilicates. The chemical bonds between these three items created a much stiffer hydrogel for 3D bioprinting, with an almost eight-fold increase in strength compared to individual components of NICE bio-ink. Next, they added adult stem cells to 3D parts printed with NICE ink and then chemically induced the stem cells to convert into bone cells. Within a couple of weeks, the cells had grown in numbers, producing high levels of bone-associated proteins, minerals and other molecules. In aggregate, these cell secretions formed a scaffold, known as an extracellular matrix, with a unique composition of biological materials needed for the growth and survival of developing bone cells.

When the scaffolds are fully developed, the bone cells could be removed from the scaffold and the hydrogel-based implant can then be inserted into the site of skull injury where the surrounding, healthy bones initiate healing. Over time, the 3D-printed scaffolds biodegrade, leaving behind a healed bone in the right shape.

“The idea is to have the body’s own bone repair machinery participate in the repair process,” said Roland Kaunas, associate professor at Texas A&M’s Department of Biomedical Engineering. “Our biomaterial is enriched with this regenerative extracellular matrix, providing a fertile environment to naturally trigger bone and tissue restoration.”

The 3D-printed scaffolds provide a strong structural framework that facilitates the attachment and growth of healthy bone cells. Also, they found that developing bone cells penetrate through the synthetic material, thereby increasing the functionality of the implant.

“Although our current work is focused on repairing skull bones, in the near future, we would like to expand this technology for not just craniomaxillofacial defects but also bone regeneration in cases of spinal fusions and other injuries,” Kaunas said.