Researchers from the University of Delaware’s Center for Plastics Innovation have developed a direct method to convert single-use plastic waste into ready-to-use molecules for jet fuels, diesel, and lubricants. 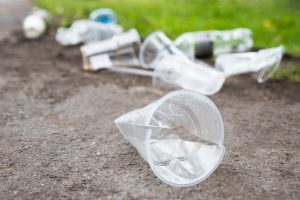 The work focuses on using a novel catalyst and unique process to quickly break down these polyolefins that uses approximately 50 per cent less energy than other technologies, and doesn’t involve adding carbon dioxide to the atmosphere. Additionally, it can be done in just a couple hours at the relatively low temperature of about 250°C.

And importantly, the UD team’s method can treat a variety of plastics, even when they are mixed together, a plus considering the way recyclables are managed.

The UD research team used a chemical process called hydrocracking to break down the plastic solids into smaller carbon molecules, then added hydrogen molecules on either end to stabilize the material for use. Catalytic cracking isn’t new – refineries have used it to convert heavy crude oil into gasoline for years – but the research team’s method does more than just break the plastic down: It also converts the material into ready-to-use branched molecules for high-value lubricant or fuel applications.

The catalyst itself is a hybrid material, a combination of zeolites and mixed metal oxides.

“Alone these two catalysts do poorly,” said Dion Vlachos, a professor of chemical and biomolecular engineering at UD and the project’s principal investigator. “Together, the combination does magic, melting the plastics down and leaving no plastic behind.”

This gives the CPI-developed method an advantage over current techniques used today. Another plus: the team’s catalyst materials are commonly used and, therefore, fairly inexpensive and abundant.

Next steps in the CPI research include exploring what other plastics the team’s method can treat and what products it can make. To begin, the team hopes to expand collaborations with colleagues across campus and in the Center for Plastics Innovation to explore other avenues for making valuable products by eliminating waste.