The material consists of synthetic resin and calcium phosphate particles processed in a hot, liquid state and hardened in a 3D printer with UV rays. 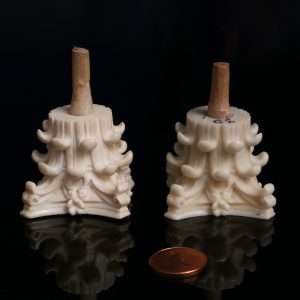 Most of us love the look and feel of ivory, but we hate the source: the tusks (traditionally elephants’) and teeth of animals, which has led to widespread animal slaughter over the centuries.

And while the ivory trade was banned internationally in 1989 to protect elephant populations, there is still a demand for the hard, white material, both to restore ivory parts of old art objects and also to create new objects with the same look and feel. Substitute materials such as bones, shells and plastic have all be used, but the results vary.

A new high-tech substitute material developed by researchers at the Vienna University of Technology (TU Wien) and 3D printing company Cubicure GmbH, in cooperation with the Archdiocese of Vienna’s Department for the Care of Art and Monuments and Addison Restoration, is said to be a real advancement. Called “Digory,” the material consists of synthetic resin and calcium phosphate particles that are processed in a hot, liquid state and hardened in the 3D printer with UV rays, exactly in the desired shape. It can then be polished and colour-matched to create a deceptively authentic-looking ivory substitute.

The research project actually began with a valuable 17th-century state casket in the parish church of Mauerbach, a town on the western boundary of Vienna, Austria. The casket is decorated with small ivory ornaments, some of which have been lost over time, and the research group wanted to replace them through 3D printing technology. “We had to fulfill a whole range of requirements,” said Thaddäa Rath, who worked on the project as part of her dissertation at TU Wien. “The material should not only look like ivory, the strength and stiffness must also be right, and the material should be machinable.”

Through numerous experiments, Rath and other members of the team from TU Wien and Cubicure succeeded in finding the right mixture: Tiny calcium phosphate particles with an average diameter of about 7 µm were embedded in a special resin, together with extremely fine silicon oxide powder. The mixture is then processed at high heat in Cubicure’s 3D printers using the hot lithography process: Layer by layer, the material is cured with a UV laser until the complete object is finished. 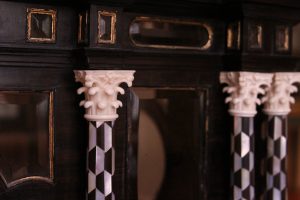 Detail of the Digory material on the state casket. Photo Credit: Vienna University of Technology

“You also have to bear in mind that ivory is translucent,” Rath said. “Only if you use the right amount of calcium phosphate will the material have the same translucent properties as ivory.” Afterwards, the colour of the object can be touched up, and the characteristic dark lines that normally run through ivory can also be applied afterwards with high precision.

The casket restoration accomplished, the team realized that the Digory material is not only a better, more beautiful and easier to work with substitute for ivory available than before, but it also makes it possible to reproduce the finest details automatically. Instead of carving them out of ivory substitute material – which can take days – the objects can now be printed in a matter of hours.

“With our specially developed 3D printing systems, we process different material formulations for completely different areas of application, but this project was also something new for us,” said Konstanze Seidler from Cubicure. “In any case, it’s further proof of how diverse the possible applications of stereolithography are.”

The team hopes the Digory material will become generally accepted in the future as an aesthetically and mechanically high-quality ivory substitute.