Hamilton Plastic Systems is being reborn in the U.S.A.

Mississauga, Ont.-based auxiliary equipment maker Hamilton Plastic Systems is reinventing itself by expanding its product offerings and making a deep dive into the American marketplace. 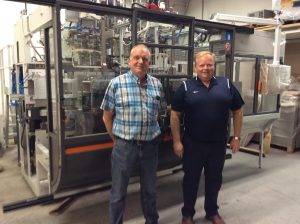 Making it big in America has always been a benchmark for skilled and ambitious Canadians – even Gretzky had to move to Los Angeles to become a legitimate superstar.

Likewise, Canadian companies are naturally drawn to the U.S. when they decide it’s time to grow, since the American market offers a host of attractions: geographic proximity, a familiar language and culture, and a business-friendly environment.

All of which explains why one of the most familiar surnames in Canadian plastics has set its sights south of the border.

Mississauga, Ont.-based Hamilton Plastic Systems Ltd., owned and operated by Steve Hamilton and Douglas Hamilton, actually began to plan its expansion into the U.S. several years ago – which is also when the company began to reinvent itself. Founded in 1965 as A.C. Hamilton and Co. Ltd. by industry pioneer Arthur Hamilton, the firm became well known for designing, developing, and manufacturing material handling, blending, drying and product conveying systems for plastics processing; and also as a sales distributor for other plastics industry equipment and machinery suppliers. A.C. Hamilton was renamed Hamilton Avtec in 1992 when the second generation, brothers Steve and Richard Hamilton, took over; and renamed again as Hamilton Plastic Systems in 2011, when Richard Hamilton retired and Steve and his nephew Douglas Hamilton took charge. Shortly after, Steve and Douglas also began to slowly recalibrate the company. “Hamilton Avtec’s focus was purely on auxiliary equipment: material handling equipment, including pellet and powder loaders, vacuum and pressure pumps, station controls, additive feeders and railcar unloading and custom scale systems,” Steve Hamilton said. “Its major market was Canada – which accounted for three quarters of total sales – and its main sector was automotive.”

But this latest generation of the Hamilton family had good reasons to want to shake things up a bit. “When Douglas and I took over, our biggest concern was where we were going to focus,” Steve Hamilton said. “The automotive market was unreliable, fluctuating between highs and lows, and the recession had changed a lot of the rules about equipment supply and demand.”

The goal, he continued, was to find a stable business base. There are two primary ways to do that – either by expanding or limiting your product offering. “We chose to expand,” Steve Hamilton said. Drawing on Steve Hamilton’s own background in the blow molding sector, the company became the North American representative for Italian extrusion blow molding machinery maker Plastiblow Srl. “Representing Plastiblow means that we’re now selling both processing and auxiliary machinery, which is a big step forward,” Steve Hamilton said. “We now have direct contact with processors, and we can pursue material handling opportunities with them.”

An even bigger move was the decision to focus on the U.S. “We pushed our resources into the American market, and it took a few years to make that breakthrough,” Steve Hamilton said. But the work is paying off. In addition to handling Plastiblow in North America, the company is also the North American representative for Movacolor gravimetric and volumetric dosing systems and – most recently – for Plastic Systems S.p.A., which is also headquartered in Italy. “Plastic Systems makes a complete line of conveying equipment, and we signed a contract to carry their entire product line during NPE2018 in May,” Steve Hamilton said. “They’re probably best known for their drying systems, especially for their relationship supplying Husky with PET dryers.”

Between Hamilton Plastic Systems’ affiliations, distribution lines, and its own representatives, the 15-employee-strong company now distributes to almost 80 per cent of the U.S., Steve Hamilton said. “We’re now taken more seriously in America,” he said. “We’re much better known than we used to be, and are brought to the table on more projects. It definitely represents our biggest sales spike.”

Which doesn’t mean the company has forgotten its roots, however – the firm’s latest development is 100 per cent made-in-Canada. “We have a new proprietary Meridian 5 wireless control system for all of our equipment that we believe is going to revolutionize how loading systems are put together,” Steve Hamilton said. With a system configuration of up to 96 stations, 32 vacuum pumps, and 32 purge valves, and a long list of standard features – including “first-in, first-out” technology and station prioritization to ensure that receivers keep up with higher demand machines without sacrificing system performance – the new controller works on all Hamilton Plastics Systems brand auxiliary and material handling equipment, and is designed to meet the most demanding applications. “Once a customer buys the controller, that’s it – they never have to upgrade it,” Steve Hamilton said. “If they need to add another station, they buy another loader, add it on, and continue forward. The controller automatically recognizes the new station and adds it on as the next one in line. It’s a configurable and continually expandable plug-and-go system, and it also eliminates the cost of wiring, which is a major cost to installing new equipment.”

An improvement on Hamilton’s Meridian 1 controller, the Meridian 5 took five years to develop, Steve Hamilton said. “We’ve put a lot of research and effort into this, with most of the work being done in-house,” he said. “The controller is currently in beta testing, and will be rolled out at the end of August.”

Designed and developed in Canada, the Meridian 5 will become a hot item both north and south of the border, Steve Hamilton hopes. “The new controller is part of our reinvention, and goes hand-in-hand with our push into the American market,” he said. “We’re adding one to two new workers every year, and it’s largely because of the U.S. We’re still growing in Canada, but our growth in America has been tremendous.”