Quebec Report: Two parts are better than one

This manufacturer of continuous polymer screen changers has leveraged demand for its unique in-house metal treatment technology into a new revenue stream, and a separate operation. 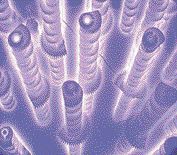 Sometimes the market sends you a message. In the case of PATT Technologies, parent company of PATT Filtration, this message was that its pulse plasma ion nitriding technology and business was strong enough to stand on its own. As a result, this September the company launched PATT Ionics, a new division dedicated solely to capitalize on growth in the market for commercial metal surface- treatment.

The nitriding technology evolved out of PATT Filtration’s business as a manufacturer of constant pressure drop, continuous screen changers used for polymer filtration. In the process of designing and making screen changers, the company looked at different ways of surface treating and hardening certain components, such as discs and body blocks. It attempted to out-source treatment but wasn’t satisfied with the results. The company eventually developed the pulse plasma nitriding technology and built the first North American plant for treating parts in 1993.

“The advantage of this technology is that you can apply micro layers of nitride coatings at lower cost,” says Jack O’Connell, sales manager, PATT Filtration. O’Connell says these ultra-thin coatings eliminate risk of distorting the part, while preserving the ductility of the core metal.

The new company’s technology now encompasses several types of metal treatment processes. The processes include PLASNIT for ion nitriding of ferrous metals, PLASTIT for deposition of thin, hard layers such as TiN, TiCN and others, and Plasma Assissted Chemical Vapor Deposition. The processes, which improve wear resistance, hardness and corrosion resistance, are being targeted for the aerospace, automotive, machinery, tooling and plastics industries, among others.

Both PATT Filtration and PATT Ionics, along with parent PATT Technologies, are located in St. Eustache, QC. The company has recently added over 20,000 sq. ft. of space to its office and manufacturing facilities to accommodate growth in business.

“We’re up and running,” O’Connell says of PATT Ionics, reporting that it has already acquired a nine-year contract from BMW to nitride a key engine part used in every one of the car company’s 4 to 12 cylinder engines.