The Calgary-based firm’s director of sustainability looks back on her rise in the polyethylene resin industry. 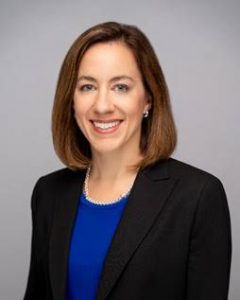 During a hectic period in which Nova Chemicals Corp. has dealt with a global pandemic while also remaining committed to growing a global circular economy, the Calgary-based firm’s director of sustainability Sarah Marshall has time to take a look back at her rise in the materials industry.

Marshall has been with Nova, a major North American polyethylene resin maker, since 1997, and signed on with the company fresh from graduating from university. “I earned a Bachelor of Engineering degree at McGill University in Montreal in 1997,” she said. “At that time, Nova was recruiting for new hires in their technical service group in advance of our Joffre 2000 expansion program. Normally, Nova didn’t recruit this far east, but the hiring leader had attended McGill, and that’s how I came to move to Calgary and work at Nova.”

Marshall’s first position with Nova was as a technical service specialist. “Our team supported the product quality and qualification requirements, working with sales and marketing and serving as the technical interface to our customers,” she said. “At that time, I enjoyed learning all about the technical aspects and challenges of converting polyethylene to products, and also the travel associated with the role, and it gave me the opportunity to assist in the development of our new products with the start-up of our first Advanced Sclairtech technology plant.”

From there, Marshall moved into product development and project management – first as leader of the product and catalyst R&D department, and then the technical service department – both of which contributed, she says, to her understanding of the growing importance of sustainability. “This was where I re-engaged with the marketplace, and saw the tremendous risks and opportunities in the plastics sustainability space and the tremendous rise in public awareness of the plastic waste issue and its effect on the globe,” she said. In 2019, Nova appointed Marshall as the company’s first director of sustainability, responsible for leading the efforts to achieve its vision for sustainability.

And these efforts have been considerable. Nova has developed a portfolio of recyclable film structure designs for packaging applications, including a recyclable stand-up pouch film structure that can be used in food packaging traditionally made with nonrecyclable, mixed-material structures; and most recently, a new series of customizable polyethylene film structure designs formulated with post-consumer resin that can be tailored to meet the demands of film applications including heavy-duty sacks, collation shrink, stretch film, agricultural film, trash bags and liners, food packaging and protective packaging for e-commerce, such as bubble wrap and air pillows.

The goal of advancing sustainability, Marshall says, requires blending commitment to the cause with logic. “One of my sponsors was well known for reminding us that ‘we make decisions with data’,” she said. “It’s sensible and straightforward advice, and it still guides me in my career as I’ve moved from primarily technical work to more strategic, change leadership work. All business cases require decisions based on the data, and I continue to share this advice with others.”

Looking back on her career to date, Marshall says her proudest achievements often relate to problem-solving and innovation. “I’ve always enjoyed the thrill of participating in innovation,” she said. “During my technical career, I have been awarded several patents that have resulted in new, valuable revenue streams for the company.”

Lessons learned along the way include understanding the value of working respectfully as a team. “Early on in my career as a new leader in middle management, I had a frontline leader reporting to me who left the company, partially due to differences between us,” she said. “This was a powerful lesson for me, and as a result I’ve learned to acknowledge and respect different leadership styles while focusing on work outcomes and metrics.”

As a Nova executive – and also having been a Board member and then Chair of the former Canadian Plastics Industry Association – Marshall is probably one of the better-known women in Canada’s plastics sector. But she’s hoping this will change. “The plastic industry is under-represented in women at all levels compared to society – some of this is related to the stubbornly low percentage of women graduating with technical degrees like engineering, and the need for these technical skillsets in the manufacturing sector,” she said. Work also needs to be done to retain women throughout their careers through sponsorship and mentorship. “Personally, I have a mentee from the Young Women in Energy program and have participated in other mentoring activities through Nova,” Marshall said. “I believe we all have a responsibility to encourage women to consider the plastics industry.”