Polystyrene: The polymer that gets no respect 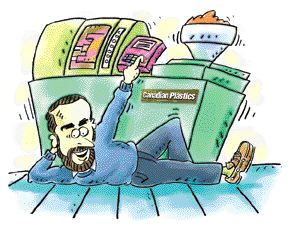 Remember when the word “plastic” was a synonym for “cheap” or “shoddy”? The bad rap that polymers struggle against even today has much of its roots in one commodity polymer: polystyrene. I think the poor polymer has suffered long enough. It’s actually a very useful and interesting resin.

The main chemical precursor to PS, styrene, is a naturally occurring substance present in many foods such as wheat, beef, strawberries, peanuts and coffee beans. It was first produced commercially in the 1930’s, and really came into it’s own as a feedstock during World War II, when it was an important constituent of synthetic rubbers.

When the war ended, the styrene monomer capacity was soon transformed into polymerization capacity to produce one of the first commodity resins: polystyrene. Indeed, polystyrene has been around longer that most people think. A German apothecary named Simon stumbled across the stuff in 1839, but didn’t realize the commercial importance of the substance. The secret remained undiscovered until another German, Hermann Staudinger, thought about PS as a long chain of styrene molecules, and described statistics to mathematically model its behavior in 1922. By 1930, BASF had worked out commercial production techniques, and in 1937 Dow introduced polystyrene to the U.S. market.

Astute readers will recall how polyethylene and polypropylene are really enormous chains of carbon atoms in a snake-like twisting mass (“amorphous” is the technical term) that can be several hundred thousands of carbon atoms long. How those chains fold and the way that the carbons and attached chemical groups interact with each other and with neighboring chains essentially determine the physical properties of the resin.

In the case of polypropylene, an additional carbon dangles from the main chain, giving that commodity polymer many of its well-known properties. It’s possible, however, to add more interesting things to the charm bracelet than just another carbon. Benzene, a six-sided ring of carbons, can be added to create, you guessed it, a styrenic polymer.

One carbon or six, you may ask, what’s the difference? The difference is enormous, both because of the additional chemistry available at the relatively fat six-sided ring, and because of what chemists call “steric factors”. That’s another word for “packing”, and like those “icicle” Christmas lights you put away last winter, it’s not that easy to pack long polystyrene chains into a small box when the main chain has things hanging off at right angles. Styrenic polymers, however, have another property: under certain conditions, they pack in regular, ordered “domains” like spoons in a drawer, although only in some regions of the overall mass of resin. Those carefully packed regions of resin have another name: crystalline. It’s the degree of order that determines crystallinity and all the properties that go with it, like a sharp melting point, well defined cleavage planes and the funny “tinkling” sound that a polystyrene ruler makes when you drop it onto your desk. For early styrenics, however, controlling the degree of order and keeping the material from degrading during processing was at best guesswork, and some very inconsistent products were manufactured. When something was said to “snap like plastic” it was likely polystyrene.

As a cheap commodity polymer in its natural state, polystyrene has been overtaken by polypropylene and others, but as a component in alloys and copolymers such as ABS, it’s still commercially very important in a wide variety of consumer and industrial products. I’ll touch on those sophisticated resins in a future column.