The researchers from Washington University in St. Louis, Missouri have developed a conductive polymer coating that allows bricks to store energy in order to power electronic devices. 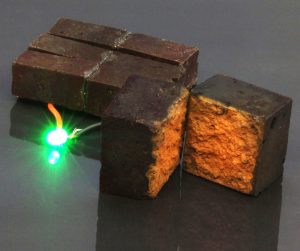 Researchers have developed a method to make or modify “smart bricks” that can store energy until required for powering devices. Photo Credit: Washington University in St. Louis/D’Arcy laboratory

Typically used for construction and architectural projects, red brick is a durable, universal building material produced by thousand-year-old technology that very few people thought would ever be developed any further.

But don’t tell that to researchers from Washington University in St. Louis, Missouri, who have now developed a method to make or modify red bricks into “smart bricks” that can store energy just like a battery for use in powering electronic devices.

The technology uses a coating of the conducting polymer PEDOT, which is comprised of nanofibres that penetrate the inner porous network of a brick; a polymer coating remains trapped in a brick and serves as an ion sponge that stores and conducts electricity.

The red pigment in bricks – iron oxide, or rust – is essential for triggering the polymerization reaction. The walls made of such energy-storing bricks could store a substantial amount of energy, the researchers say.

The final product could be connected to a power source to charge and store enough energy to power a light. Three bricks together kept a 3-volt green LED lit for about ten minutes on a single charge. It also worked underwater. After charging 10,000 times, the blocks lost no more than 10 per cent of their storage capacity.

“PEDOT-coated bricks are ideal building blocks that can provide power to emergency lighting,” said Julio D’Arcy, assistant professor of chemistry at Washington University and a member of the research team. “We envision that this could be a reality when you connect our bricks with solar cells – this could take 50 bricks in close proximity to the load. These 50 bricks would enable powering emergency lighting for five hours.”

Downsides at the moment include the fact that the researchers don’t yet know whether the bricks willmaintain their strength when the iron oxide in them is dissolved. “They were exposed to acid, so I would not use them for construction purposes, but we have not carried out mechanical testing,” D’Arcy said. “Instead, they could be used in a more decorative capacity.”

The bricks are also expensive: each brick costs about US$2 to US$3 to make, so the team will have to determine how to make them cheaper before commercialization becomes feasible.