In an industry where customer service is everything, the installation of a new EFI PrintFlow scheduling workflow system is helping this Quebec-based form-fill-seal film and plastic valve bag manufacturer stay ahead of the competition. 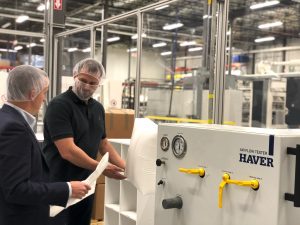 If you’ve ever lost that last piece of an almost-finished jigsaw puzzle, you’ve learned the hard way that you can’t complete a picture until absolutely everything is in place.

The same holds true for building a successful business: it can’t be done if something – anything – is missing from the mix. Quebec-based Plastixx FFS Technologies Inc. recently put what could be the last piece of its own puzzle in place when it added a more efficient scheduling workflow system to its operations.

Founded in 2010 as part of the NELMAR Group of Companies, which produces security packaging, Plastixx FFS manufactures specialty tubular form-fill seal films and plastic valve bags that are both weather-resistant and 100 per cent recyclable. The bags, which feature a special venting system that eliminates excess air without exposing the product, are used to package building materials, tile adhesives, cementitious materials, fertilizer, dry food ingredients and more.

In 10 short years, Plastixx FFS has made a significant difference in the efficiency and sustainability of tubular form-fill-seal (FFS) bags. Previously, North American businesses had to endure the cost – and the added environmental impact – of importing bags from Europe. “We started our business to service domestic demand for this very new and specialized type of heavy-duty shipping sack,” said the company’s president Ricky Gold. “We initially manufactured only tubular FFS films with a sophisticated labyrinth venting system to package industrial materials like concrete mix, grout, and tile adhesives, with the goal to expand and include bags and films for specialty chemicals and food-related products such as protein powders, starches, preservatives, and even dried food ingredients. We’ve really become a one-stop shop for very specialized forms of recyclable, moisture-proof, and weather-resistant packaging for the industries that we service.” The company’s well-known XFLO and XFLO+ bags feature a venting system that enables excess air to escape after the filling process for enhanced enhanced sealability. 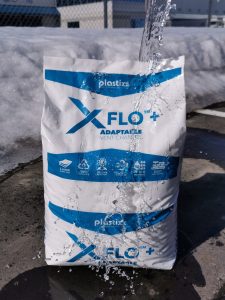 About three years ago, Plastixx FFS commercialized a plastic valve bag – branded as XVALVE and XVALVE+ – that Gold says is a lighter-weight, “one-for-one substitute” for paper valve bags being filled on manual or automated lines. “It can be filled at the same speed as a paper bag, is 100 per cent recyclable, and is also completely weather-resistant,” he said. “Another huge benefit is clients can use our new valve bag product on their existing filling equipment. The plastic valve bag offering opened up a new avenue for growth, and the result has been tremendous.”

If that sounds like the last piece of Plastixx FFS’ puzzle put firmly in place, it wasn’t. Despite the company’s successes, its workflow scheduling was overdue for an optimization. “We were using an Excel spreadsheet for scheduling, which was an incredibly manual and labour-intensive process,” Gold said. “We knew we needed a better, more efficient scheduling workflow system, so our goal became to find one that was capable of integrating with our company’s current ERP system, SAP Business One, which is also used by the entire NELMAR Group,” he said.

HITTING ON THE RIGHT SOLUTION

Plastixx FFS engaged three different companies – two non-SAO options and SAP with its production planning module – to help find a more advanced and efficient replacement, and then it approached EFI, the developer of PrintFlow, a print and packaging industry scheduling solution that employs the principles of TGO, short for the “theory of global optimization”. TGO focuses on identifying the constraints that hinder overall throughput within the print and manufacturing process and adjusting production schedules to optimize productivity. PrintFlow leverages smart software, using complex algorithms to dynamically synchronize and optimize every step of the manufacturing process. “Once we understood the nuts and bolts of PrintFlow, it was the clear winner,” Gold said.

PrintFlow provides a real-time production and schedule status at a glance and allows for drag-and-drop schedule editing with conflict alerts. Users can automatically load new jobs as they’re created, and the system has the ability to automatically determine the most optimal production path for every new job. The software continuously factors in thousands of constraints, including customer requirements, job specifications, capabilities, and availability of materials, tools, equipment, employees, and more. PrintFlow’s rules-based logic is configurable to a plant’s unique production methods and scheduling requirements, so it can be tuned to any enterprise or machinery profile to deliver optimum results. And importantly for Plastixx FFS, users can integrate PrintFlow with the SAP ERP platform.

One of the first major advantages PrintFlow delivered at Plastixx FFS, Gold said, was an immediate reduction in errors when job specs were changed. “SAP became the master database for everything, and when there was a change, PrintFlow would automatically reflect those details,” he said. “We reduced our error rate immediately, and the switch to PrintFlow also reduced the need to do reruns.”

External and internal communications also improved. Using PrintFlow’s web view, the company’s internal communications team gets real-time data on where jobs are in the queue and when they will be complete, so they can give customers accurate delivery dates. “All of that information is available to them, and it doesn’t require meetings, phone calls, or internal emails, so they are more effective in how they do their jobs and more efficient in how they use their time,” Gold said. “PrintFlow has provided a holistic map of each step of the manufacturing process, marking all of the steps involved and the components that need to come together to accurately hit a required delivery date.”

Plastixx FFS is one of three companies operating from the NELMAR Group’s 200,000-square-foot facility – the others being Nelmar Security Packaging Systems Inc. and Plastixx Extrusion Technologies Inc. – so PrintFlow’s ability to connect three different databases is also a big benefit. “We can now run ‘what-if?’ scenarios that determine, for example, how inserting the job in the middle of a queue would impact other jobs downstream, and get instant feedback,” Gold said. “We can also run jobs from two companies interchangeably without issue and schedule the jobs coming from both companies based on reduced switchover times, which was very difficult to do previously.”

Gold and his staff have also noticed a significant increase in customer satisfaction and retention rates, which has helped stimulate business opportunities. “Our customer service doesn’t stop once we produce and put the film on the truck, so being able to meet customers’ expectations with delivery dates and improved communications is in part because of EFI and PrintFlow,” Gold said.

And these capabilities are perhaps more valuable than ever during the current global pandemic. “Our customers all have different challenges due to COVID-19 and some have had to ramp up their own production dramatically, and we’ve been able to utilize PrintFlow’s functionality to prioritize their needs,” Gold said. “In our own plant, we’re using PrintFlow to help move people from one machine to another to prevent bottlenecks.” The company has also implemented social distancing for its employees, installed Plexiglas barriers where necessary, and is following other government-mandated requirements, but was probably better prepared for the crisis than many other manufacturers due to its already high sanitization standards. “Plastixx FFS has a Level 2 certification from the Safe Quality Food Institute, so we’ve always been committed to operating a clean, organized, and controlled manufacturing facility,” Gold said.

Now more than ever, indeed, it’s critical to have all the puzzle pieces in place.