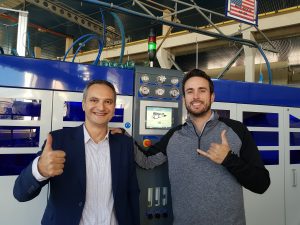 Aloha, the most famous word in the Hawaiian language, can mean hello or goodbye. For PET Technologies GmbH, it definitely means hello – to a potentially lucrative relationship with the fastest growing premium bottled water supplier in the U.S.

The sources of Waiākea Water are snowmelt and rain on the pristine peak of Hawai’i’s active Mauna Loa volcano. The water is filtered through thousands of feet of porous volcanic rock, enhancing it with electrolytes and minerals such as silica, calcium, and magnesium. As if that’s not unique enough, Waiākea Water – which was founded in 2012 – is one of the first premium water brands in the world that uses 100 per cent recycled PET (rPET) for all of its bottles. For Waiākea Water, which takes sustainability seriously, it’s no mystery as to why: rPET bottles require 85 per cent less energy to manufacture, 90 per cent less water during the manufacturing process, and can reduce carbon emissions by over 90 per cent compared to molding traditional PET.

So when the company began looking to add another blow molding machine to its manufacturing plant a few years ago, PET Technologies had a tall order to fill. “We first met with representatives of Waiākea Water at a trade show in Las Vegas in 2015,” said Vladimir Tsallagov, PET Technologies export director. “Another customer of ours had recommended us to them, and it became clear very early on that Waiākea Water wanted something unique.” First and foremost, the water bottler needed a blow molding machine that could run an rPET perform. “We had to make sure that our APF-6004 would perform properly with Waiākea Water’s rPET perform,” Tsallagov said. “Ryan Emmons, owner of Waiākea Water, came to our machine assembly plant in Chernihiv, Ukraine, to oversee the tests.”

Second, Waiākea Water was looking for a few custom requirements. “Their bottles are available in five sizes – from 330 ml to 1.5 litre – and they asked us to optimize the bottle design to achieve a high output,” Tsallagov said. “They also wanted to change the bases of their bottles in order to lightweight. We were able to do all of these things.”

The four-cavity APF-6004 that was delivered to Waiākea Water can manufacture up to 6,000 bottles per hour and became operational in mid-April, Tsallagov said, and is a much better choice for the bottler than the used blow molding machine it had initially considered buying. “The used machine was a different brand, and would not have measured up to Waiākea Water’s unique rPET and lightweighting needs,” he said. “Getting parts and service for an older machine could also have been an issue because Hawai’i is so remote.”

For PET Technologies, this could be the beginning of something big with its new customer, which is one of the fastest growing beverages in the U.S. and has been ranked number 774 in the 2018 Inc. 5000 list of America’s top entrepreneurs. “We’ve always had a big presence in Europe, and decided a few years ago to focus on North America,” Tsallagov said. “Since then, we’ve sold machines to blow molders in Canada, the U.S., and Mexico. Supplying one of our APF-6004 stretch blow molding machines to Waiākea Water is a big endorsement and we’re proud to be associated with them.”