So you’ve finally decided to automate your end-of-the-line part packaging process? Great. Now here’s how to do it. 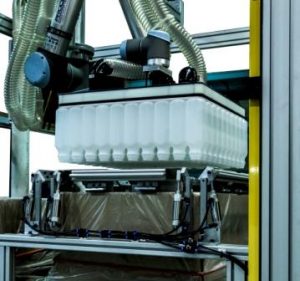 A staple of sci-fi films is out-of-control robots doing bad things to good people. And a staple of real world manufacturing today is the fear that robots have too much control, and are doing bad things to good factory workers by taking their jobs. But here’s another way to look at it: By automating the repetitive, tedious jobs, people can be redeployed to areas where they’ll be safer and more engaged in their work.

And few jobs are more repetitive and tedious than part packaging, which can involve lifting, bending, labelling, inspecting, and orienting parts for virtually an entire work shift. Which is why more and more plastics processors are automating their end-of-the-line part packaging processes. Robots can pack less expensively than people, can work around work-force shortages, are capable of complex picks and motions that would not be possible or safe for a person, and run an average of 80,000 hours before requiring maintenance.

But savvy processors with plans to switch from manual to automated part packaging still have to take a number of factors into account to ensure they get the best, most competitive robotic system for their needs.

The biggest decision to make at the outset is whether automating an end-of-the-line packaging system is actually a better option than manual packaging. Sometimes the answer is no. “People are efficient at packaging small, short, one-of-a-kind runs, so robotics may not be the best choice for a product that will only run once, or if different products run every day,” said Dale Arndt, director of engineering with Fanuc Canada Ltd. Since repeatable runs are a key factor in robotic efficiency, begin by analyzing run times and product quantities. And you don’t have to make this analysis on your own — automation systems suppliers can help. “Fanuc uses a charting method that assesses ease of automation and value of the automation task,” Arndt said. “If something is hard to automate and low value, we recommend leaving the part to be packaged manually; if it’s a high-value task and easy to automate, we recommend automating it.” 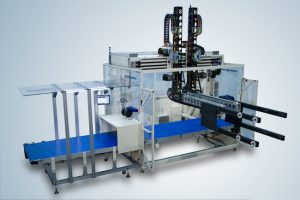 Another important point is whether or not the processor has ever used robotic automation before. If not, robot systems suppliers recommend against automating every part packaging line in one go. Beyond that, there are different schools of thought for dealing with first-time customers. “When working with a company that hasn’t had automation before, we look for the heaviest hitting application that will give it the best return on investment, which tends to be the highest volume run,” said Taras Konowal, North America director of sales for CBW Automation. “Automating this production line will give the customer the experience it needs to handle automating other lines later on.” Other automation suppliers prefer to tackle the easiest production line first. “Some customers that are automating for the first time want to start with the toughest packaging application as a test,” said Joe Campbell, senior manager, strategic marketing and applications development with Universal Robots USA Inc., which makes collaborative robots. “We suggest they begin by automating a simpler application instead, where they can see immediate results and gain experience for other, more complex applications.”

Once the decision to automate a particular packaging line is made, the packaging system provider needs to know some key points before it can recommend the right solution. “The fundamentals for any robot application are, what’s the part being made, what’s the payload, and what’s the cycle time?” Campbell continued. “From there, we want to know how the parts are being presented out of the mold, and also the box size. This is an advantage of collaborative robots, which are versatile enough to handle different box sizes, different stack heights, and different volumes of parts going into a box.” Another key consideration represents a genuine fork in the road that can take you in one of two different directions: are the parts being packaged after degating for direct shipment to a customer, or do they require either immediate post-mold assembly or simple box filling to be sent somewhere else in the facility for post-mold work? “If the parts require additional work down-line, installing two robots might be the best solution — a top-entry robot to degate the part and a six-axis robot to manipulate it for assembly or secondary operations,” said Tim Lavigne, business unit manager with Absolute Robot Inc. “Sometimes one six-axis robot will have the reach to perform both degating and post-mold work by itself, but not often.”

If the parts are being packaged for in-house work later on, the robotic automation might not have to be quite as precise. “In these situations, the processor usually only needs to bulk-fill the box, which means that the orientation of the parts within the box probably doesn’t matter quite as much — we only need to know the count number of parts that will go in each box; when that count is reached, a new box is delivered,” said Jim Healy, vice president, sales and marketing, for Sepro America LLC. “Most of the inquiries we get from customers are for situations like this, where parts are going to be stored for secondary assembly later on. But if the parts are being packaged for direct shipment to customers, we need to know as much as possible about the part dimension: its size, shape, orientation in the box — the entire packaging array.” For either situation, Sepro’s Speed-Entry is a range of side-entry robots specially designed for high-speed picking and placing of packaging parts, with a modular design that makes it suitable for any type of layout. And Proco Machinery Inc. recently introduced its new Robo Packer case packer, which can be supplied with any one of three different robotic arm payloads depending on the application, the task to be performed, and the level of productivity that’s required. “The Robo Packer can be configured to pack all necks up or all necks down either using row-by-row or full-layer packing methods,” said Siva Krish, the company’s vice president of sales. “In situations where a standard configuration doesn’t work, we can develop custom tooling to pack bottles lay-flat inside the box.”

Especially for parts that will be packaged and shipped out directly, product behaviour can be an issue, since differences in the physical characteristics of plastic containers — such as round, square, or tacky — can affect the performance of a packaging system. “This is why we always want to see part drawings and part samples before recommending custom automation,” said Tim Lavigne. PET bottles, meanwhile, can develop static “cling” that causes them to bunch up and move unpredictably as they’re fed down a conveying line and onto a palletizing/collating table or stack. “Static cling in PET bottles can be a huge problem, since they repel each other and push off the collating table, causing shorted bottle counts; or they cling together, making it difficult pick them up or palletize them without operator intervention,” said Siva Krish. “A good way to solve it is by putting an antistatic blower on the infeed conveyor to remove the static charge from each bottle.”

In addition to antistatic spray systems that blow charged air onto the bottles, grounding strips or plates on the machine can help dissipate static build-up, as can changes in conveyor belt material that lessen the friction. Sometimes FDA requirements for handling of food containers dictate which areas of the containers can come in contact with the tool, which can impact end-of-arm tooling design. “In these situations, the robotic arm must have a food-grade design,” said Olivier Cremoux, business development manager at Stäubli North America. “The integration of the arm must respect the sanitary requirements of the production area, most of the time avoiding having the robot or retention areas on top of the products. Then the tooling must be compatible to touch the product, avoiding contamination and damage to the product.” This is a rare instance in the entire robot installation process where the customer will know more than the automation system supplier. “Customers will give us boundaries as to how we can handle a part — generally with medical or food packaging applications — and we’ll use that information when designing the solution,” said Jim Healy. “This isn’t an area where we can instruct them.”

With these issues decided, the next step is making sure the robotic components will actually fit into the available floor and ceiling space. Consulting with a packaging system provider to think through the layout design phase comprehensively can save both time and money, especially on big projects. “This is a great place to use simulation software to discover what the options are, and to pick the lowest cost/highest functionality solution that matches the available space,” said Dale Arndt. “There are three solutions to floor and ceiling height limitations: stationary platen-mount robots, which take up very little space; product lines that move sideways along the platen; and floor-mount and rollaway floor-mount automation, which are side-entry but can be pushed out of the way when the processor has to change the tool.” For part packaging in tight areas, the new B2X side-entry robot from CBW Automation has been designed with a particularly small footprint, as well as 50 per cent greater production output, quicker changeovers, and cost savings compared to the company’s previous high-speed retrieval system. An end step in plastics production is quality control, which on a manually packaged line is almost invariably performed by an employee on that line.

But if the line gets switched over to an automated packaging process, something new will be required. What, exactly, depends on the application — it can be as simple as a leak checker or as high-tech as a vision system or other sensor, and both automation system suppliers and systems integrators can supply the technology. “Vision-guided robotics can now check each part before it’s put in the box,” said Jim Healy. “The robot can also be programmed to inspect a single part at a predetermined part count — one in every 100 shots, for example, or one in every 200 shots — so that if parts begin to go bad, the customer has a window into when the failure began.” In case you’re tempted, trying to automate only the QC while leaving the part packaging to be done manually is probably not a great idea. “When this happens, there’s no repeatability in the process, and you’re not using the full advantages of automation,” said Olivier Cremoux. “With Stäubli’s TX2 collaborative solution, the robot and operator can work together, combining efforts as a team.”

In the end, once you’ve decided that a production line meets the criteria for automated part packaging, the benefits can be substantial: repeatability, consistency, and letting people work where they’re most needed. The automation supplier’s job is to get you there by determining the best robotic system for your needs and making sure the installation process goes smoothly. And that’s not science fiction.