The installation comes as the Pensacola, Fla.-based company positions itself for future expansion. 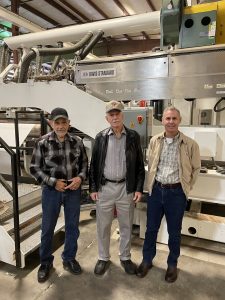 Founded in 1986, PCP is an employee-owned company that supplies local and international markets with customized polycoated products such as polycoated paper, freezer paper, foil coated paper, and pre-laminated sleeve stock used in food service, construction, home products and other industries.

And while the company is 34 years old, the existing Black Clawson machine is actually 60 years old. The story of PCP’s founding is quite a tale. The company got its start in after founders David Pitts and the late David Mayo, along with 15 colleagues, got together and pooled their resources to start their own business. They were working for paper-coating company St. Regis when the company sold to Champion, resulting in closure of the facility and sale of the company’s Black Clawson extrusion coating machine. Mayo and Pitts, along with three other supervisors and 12 production workers, decided they knew enough about the business to take a risk and go out on their own. Mortgaging their homes and spending all of their private savings, they purchased the extrusion coating line, found a property a few miles down the road, bought the land with a lease-to-buy plan, and built a 10,000-square-foot facility. By May of 1986, PCP was in business, and the company has since expanded its original building to 75,000 square feet and has sales of US$20 million.

“We knew we could make a quality product, had excellent relationships in the industry, and a good polyethylene supplier,” said David Pitts. “Our success was built on a lot of hard work and dedication filled with long hours and many blessings. Our customers came first and we got the machine at a good price. We started production running five days a week, but quickly moved to seven days a week, 24 hours a day. Within five years, we recouped our investment.”

According to Pitts, “the tank” has always been a real workhorse, requiring only occasional feedscrew, die, and barrel replacements. The company will continue to run this line in addition to the new Davis-Standard extrusion coating line, which is capable of speeds up to 1,500 feet per minute with maximum untrimmed web widths of 74 inches. Davis-Standard supplied all components including extruder, die with APC, automatic unwind/splicer, pre-corona treater, extrusion coater/laminator, auxiliary unwinds, slitters, post/corona treater, automatic winder/roll changer, Integrator supervisory control system, and associated equipment.

The line features the latest automation technology, Pitts said, and will add a new level of efficiency and production speed to PCP’s current operation.

It’s only the latest in a series of changes PCP and its staff have seen over the decades. “We use a lot of computers and cell phones and don’t have as much personal interaction, but the business is largely the same,” Pitts said. “We have better control over the variation in polyethylene resin and the paper, and are able to achieve more consistency. There are a lot of different polymers and product additions to the marketplace.” And for Pitts himself, things have come full circle in a sense. “As a boy, my first job was at a pine seedling nursery, pulling grass from around the trees,” he said. “Today, one of our customers uses our plastic-coated material to wrap seedlings and protect them until planting.”

Davis-Standard is headquartered in Pawcatuck, Conn., and is represented in Canada by AuxiPlast Inc., of Sainte-Julie, Que.