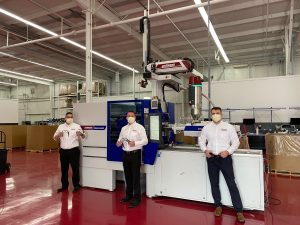 When custom injection molder Pragmatic Manufacturing of Brunswick, Ohio took delivery of its two new Wittmann Battenfeld injection molding machine workcells, complete with robots and auxiliary equipment, the plan was to bring them online to keep up with increased growth at the company.

But then the COVID-19 pandemic changed everything. Like many companies in the industry, Pragmatic was seeing a slowdown in business, but its day-to-day business was still strong, as they were deemed an “essential supplier”.

Shortly after the pandemic hit the U.S., Pragmatic was contacted by its customer MTD Products Co., of Grafton, Ohio, to say they had built a mold for producing headbands for face shield parts, and needed someone to mold them. MTD had been contacted by the Cleveland-based Manufacturing Advocacy and Growth Network (MAGNET) to build the tool. MAGNET is one of the organizers of an ambitious project to produce and deliver over 1 million face shields for front-line health care workers in Ohio, in five weeks. The project includes 19 Ohio manufacturers, working with hospitals and the state government.

Pragmatic went to MTD to pick up the two-cavity mold on a Wednesday afternoon, took it back to their plant, and worked all night to get it up and running on their recently delivered Wittmann Battenfeld SmartPower 110 machine. They had approved parts running the next day.

“We’re currently molding over 10,000 parts per day and the machine is running 24/7,” said Scott Klem, Pragmatic’s operations manager. The finished parts are sent to toy-maker Little Tikes Co. in Hudson, Ohio, where they’re repackaged into face shield kits and sent to a central location in Ohio, where the kits are distributed directly to hospitals around the state.

When Pragmatic sent a video of the workcell producing the face shield parts to Wittmann Battenfeld, Wittmann service technicians saw an opportunity for improvement. “Everything was working fine, but we knew Pragmatic needed the fastest possible cycle times,” said Jason Long, Wittmann’s national sales manager, robots and automation. “Like most companies, we have cut back on in-person service calls during this crisis, but we felt confident we could improve the process by watching the video and making some changes to the robot program.”

The Wittmann W821 robot employs the company’s patented Smart Removal function, which allows programming of the robot for optimal cycle time. A team at Wittmann reviewed the video and made some adjustments designed to speed up the robot’s operation. They sent an updated program to Pragmatic, which they uploaded to the SmartPower molding machine’s B8 control system.

“With Wittmann’s help, we were able to shave a full second of cycle time off the process,” said Klem. “This was a great example of remote monitoring and service.”