One of the most enduring parts of an automobile, the gas-tank filling cap, may soon go the way of the horse and buggy.ITW has developed a capless re-fueling system that is getting serious attention fr... 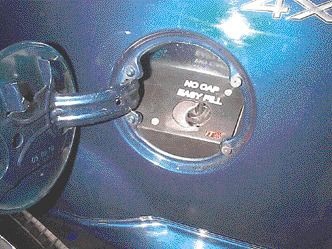 In ITW's Direct Fuel System, the gas-pump nozzle is guided into the fuel pipe by a glass-filled nylon swing arm. A housing composed of acetal and nylon seals the fuel pipe and prevents emissions from escaping.

One of the most enduring parts of an automobile, the gas-tank filling cap, may soon go the way of the horse and buggy.

ITW has developed a capless re-fueling system that is getting serious attention from the Big Three and other OEMs. The system, called Direct-Fill System (DFS), was on display at the DaimlerChrysler exhibit during the recent SAE show. The DFS is in the final stages of emission and crash validation testing. If it passes the tests, the capless refueling system will see its first commercial application in the 2004 Ford GT.

While there are still a few technical and commercial hurdles for the system to get over, a capless re-fuleing system has one huge thing in its favor — car owners want it. ITW has conducted surveys which show consumers are willing to pay up to $25 more per car for the convenience of a capless re-fueling system

ITW’s Direct-Fill System consists of a ring-shaped piece of injection molded acetal centered directly behind the exterior fuel door. When the gas-pump nozzle touches the ring, it is guided to the left, opening a glass-filled nylon swing arm. The arm allows the nozzle to enter the fuel pipe through the primary fuel shut-off (PFS). The PFS, inserted in the fuel pipe, is the primary assembly that seals gas emissions. The PFS is composed of metal, as well as three grades of DuPont’s Delrin acetal, including a conductive grade. According to Franco Cisternino, ITW program manager, refueling systems, neither the DFS or the primary fuel shut-off housing require changes to the design of current fuel systems or the exterior of the car. Cisternino says he expects the current cost premium for the capless re-fueling system to be reduced or eliminated once higher production volumes are reached.

“The main benefit to the DFS for OEMs is savings on warranty claims,” says Cisternino. He reports that car owners often fail to correctly close the cap on their vehicles, resulting in a dashboard warning light. The car owner takes the vehicle to the dealer, the problem is diagnosed and corrected, and the dealer charges the OEM against a warranty claim.

ITW’s Global Product Development Center is based in Glenview, IL.