Nylon: Polyamide and panic in the streets

A moody genius, a multinational chemical conglomerate and hysterical women rioting in the streets of New York. You can be forgiven if the combination doesn't sound like the history of a commercially i... 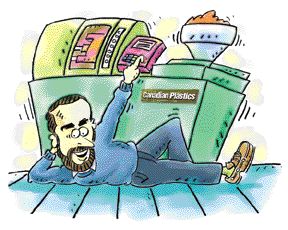 A moody genius, a multinational chemical conglomerate and hysterical women rioting in the streets of New York. You can be forgiven if the combination doesn’t sound like the history of a commercially important polymer, but for the plastic that we call “nylon”, or more properly, polyamide, it’s all part of a fascinating story. It begins in 1927 when DuPont, attempting to replicate an idea successful in the German chemical companies and at General Electric, launched a radical innovation with a lavish $115,000 budget: research.

The first hire was a mercurial thirty-one year old Harvard lecturer named Wallace Hume Carothers. Carothers could have been a Hollywood stereotype for a brilliant scientist. A loner who loved billiards and coffee, Carothers initially had free rein to assemble a team and see what brewed in DuPont’s Wilmington, Delaware laboratories.

Carothers began, logically, by building the big macromolecules that form all thermoplastics. He mixed alcohols and carboxylic acid to produce “esters”. Unfortunately, a by-product of the reaction was water, which effectively stopped polymerization. Carothers and Julian Hill developed a “molecular still” to remove the water, and the esterification kept going, creating an early form of polyester.

Then Hill made an important discovery. Removing the product from the still, it drew out into a pliable, strong fibre. Unfortunately, it had too low a melting point for textile use and dissolved in dry cleaning fluids, but Carothers was on the right track. Amides were known to have higher melting points than esters, so why not try polyamide resins? The result was failure, and Carothers and Hill gave up. This, however, was during the Depression, and DuPont wanted a home run. Three years later, in 1933, Carothers took another run at the problem. Maybe he could tailor the correct melting points of polyamides by using long chain precursors instead of building the huge molecules one atom at a time. Under his direction, Donald Coffman spent five weeks preparing a compound that polymerized with a characteristic breaking of the reaction beaker as it cooled. When Coffman stirred the melt with a glass rod, it drew out a long, tough, flexible fibre and polyamide was born.

It would widely become known as “nylon”, a corruption of “Norun”, the property the polymer was expected to give synthetic stockings. Strangely, DuPont didn’t copyright the name and hardly anyone refers to “Polyamides” as a result.

And why are they so successful?

In nylons, nitrogen replaces every other carbon, and the carbons have a strongly bonded oxygen dangling where hydrogen usually sits. The oxygen is also important, because it’s big and highly charged, giving the chain a couple of interesting properties.

One is that the long backbone packs neatly with itself, creating a highly crystalline polymer. Another is a strong affinity for water, which can swell a nylon part by as much as five percent. Unlike many crystalline resins, however, the nitrogens, called “amide linkages” allow very strong bonding between chains, giving nylon high strength and heat deflection temperatures as well as resistance to chemical attack. Despite the strength, the chains retain good flexibility, giving high lubricity and wear resistance.

There’s a lot more to say about polyamide, but unfortunately, Wallace Carothers wasn’t around to see it. A sufferer of clinical depression, Carothers, an almost certain bet for the Nobel Prize in Chemistry, committed suicide in a Philadelphia hotel on April 29, 1937, just as the patents for nylon had been filed. Carothers used a chemical compound he knew well: cyanide. Nylon would become so popular as a fibre that in 1945, women would riot in the streets of New York when the first post-war supplies of nylon stockings arrived. The introspective Harvard chemist had created the biggest moneymaker in the history of DuPont, as well as one of the most versatile resins in plastics.