Researchers have developed a method to visualize variations in polymers that arise with age, allowing for the possibility detect and replace aged parts before they fail. 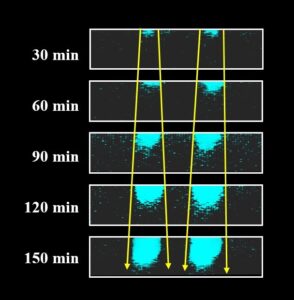 By heating a thin sheet of polypropylene for 30-150 minutes to cause aging, scientists can see the older areas turn fluorescent blue. Image Credit: American Chemical Society

Just like people, polymers begin to break down as they age – which can cause problems such as cracking or breakage in plastics used in such applications as food containers, automobile parts, and medical devices.

Now, researchers reporting in ACS Central Science have developed a method to visualize variations in polymers that arise with age.

Heat, sunlight, oxygen, and humidity can all cause polymers to degrade over time. At early stages, polymer chains break, producing functional groups, such as hydroxyl groups, and generating free radicals that speed up the aging process. Scientists have developed methods to study more advanced signs of polymer aging, but these techniques don’t provide a microscopic 3D picture, and most aren’t sensitive enough to detect early aging.

Rui Tian, Chao Lu, and colleagues wanted to find a way to visualize the aging process of polypropylene and polyethylene polymers in 3D, since such a technique could be used to detect aged polymers so they can be repaired or replaced with new parts before they fail. The researchers based their method on a commercially available fluorescent dye, called DBPA, that can specifically attach to hydroxyl groups in polymers as the chains break.

The team heated a thin sheet of polypropylene or polyethylene at 140°F and then soaked the plastic in a DPBA solution to dye the aged sites with hydroxyl groups. The researchers discovered that the soaked sheets when observed under a confocal microscope revealed the aged sites in the polymers. The aged sites were found to be growing deeper, wider, and more frequent with time.

The method detected faster polymer aging when the sheets were exposed to higher temperatures. To the researchers’ knowledge, the fluorescent technique can sensitively monitor polymer aging in 3D, which will assist in identifying deteriorating polymers at the earliest stages.