The process was developed by researchers at McGill University in Montreal. 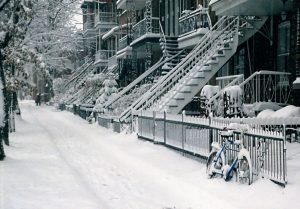 The snow is gone in most of Canada for another six months or so, but in one way it hasn’t been forgotten: as it melted, it left pollution behind in the form of microplastics and nanoplastics. And according to researchers at McGill University in Montreal, much of it comes from an unusual source: the relatively soluble plastics found in antifreeze products, or polyethylene glycols, that can become airborne and picked up by snowflakes as they fall to the ground.

Microplastics are tiny pieces of plastic pollution that measure less than five millimetres in diameter; nanoplastics are tinier still, measuring less than one micrometre in diameter, or 5,000 times smaller than the largest microplastics. Given how small these plastic particles are, finding and studying them – in order to learn their impacts on the ecosystem and on human health – can be very difficult; for example, nets or sieves that are used to collect microplastic samples need extraordinarily small filters in order to capture nanoparticles, if at all.

So, as detailed in a new report published in Environmental Pollution, the McGill team developed a new type of nanostructure – which is a structure that measures roughly a nanometre, or one billionth of a metre, in size – composed of sustainable materials such as zinc oxide, titanium oxide, and cobalt, which have well-known masses and sizes. Using these extremely small nanostructures, the team was able to collect and study nanoplastics that had accumulated in Montreal’s freshly-fallen snow. They did this using a nano-structured mass spectrometry technique, which uses light to separate and analyze particles based on their weights. This technique allowed the scientists to study nanoplastics weighing as little as a picogram, or one trillionth of a gram, a development that team member and McGill PhD candidate Zi Wang called “orders of magnitude” more sensitive than previous techniques.

The materials Wang and his colleagues used are also recyclable, which makes the technique – which can also access microplastics in water and soil samples – sustainable and environmentally friendly.

After analyzing their samples, the team concluded that antifreeze products were the main culprit behind the nanoplastics – a discovery that matters, Wang said, because it adds to the growing body of information about how plastic pollution is spread. “Our hope is that this new technique can be used by scientists in different domains [to] gain key information about the quantity of micro- and nanoplastics in urban environments,” he explained.