Researchers at Northwestern University and the University of Minnesota have improved the recycling process of polyurethane by developing a twin-screw extrusion process that improves mixing and air removal. 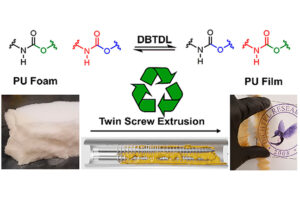 Research teams at Northwestern University in Evanston, Ill. and the University of Minnesota (U of M) have found a way to recycle polyurethanes – which are notoriously difficult to recycle – that could prevent the material from becoming post-consumer waste.

The problem being solved is that conventional polyurethanes can’t be simply recycled by heating because the material consists of polymer networks held together by strong chemical bonds that don’t flow when heated. Instead, polyurethanes can only be downcycled into less useful materials using either mechanical methods or chemical recycling. Other past methods have made innovative types of polyurethanes with cross-links that can be broken and reformed, allowing it to be recycled, but this approach requires the industry to commercialize new starting materials, and it doesn’t address the issue of conventional waste lingering in landfills. These methods also haven’t been tested on foams, a very common form for polyurethane products.

Now, however, the research teams have found a way to recycle used polyurethanes into equivalent or even higher quality material using an innovative method.

The extrusion process removes air simultaneously as the catalyst enables the polyurethane to flow like a liquid. The reactive process is like those already used in the plastics industry for other purposes meaning the technology could have impact quickly.

The teams’ findings are reported in the journal ACS Central Science, published by the American Chemical Society. The research was primarily funded by the National Science Foundation through the Center for Sustainable Polymers.

“We are quite excited about this new research from the Center for Sustainable Polymers because of the tremendous potential for recycling of polyurethane materials that are typically considered as waste,” said Marc Hillmyer, a chemistry professor and director of the Center for Sustainable Polymers based at U of M. “It also demonstrates how the powerful combination of polymer chemistry and polymer processing can be applied to help solve environmental problems.”