The Italian machinery brand is partnering with equipment supplier Globeius to make its all-electric units available again in Canada and the U.S. 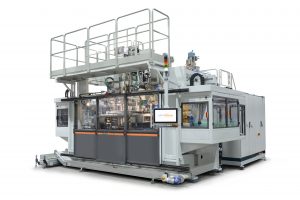 Miami, Fla.-based Plastics Solutions/Globeius has been in business for about 40 years and, until recently, focused on the plastics industry in Latin America. According to general manager Graeme Sands, who is based in Ancaster, Ont., the company was rebranded last year as Globeius to signal that it’s expanding in both product range and geography, and will now serve three market areas: plastics, agriculture, and general industrial. “We’ve had a solid presence in Latin America for the past 16 years and now we want to raise our profile in North America by branching out beyond online-catalog sales to include major capital equipment, in particular blow molding machinery,” Sands said. “We’ve already been representing Plastiblow in Latin America and Mexico for more than 10 years.”

Founded in 1964 and in business as a blow molding machine manufacturer since 1972, Plastiblow is a pioneer in making all-electric units. The firm has had some representation in Canada and the U.S. in the past – and there are a few older systems from the 1990s still in operation in a few shops today – but it never made any real inroads, and the company hasn’t been active here for years. But now it’s back in this new joint venture that builds on its relationship with Globeius and, according to Sands, the Plastiblow brand – which consists entirely of all-electric, shuttle-type extrusion blow machines, both single- and double-sided, for making parts from 10 ml to 30 litres – has a number of factors in its favour. First, he said, they’re less expensive than more familiar all-electric competitors. “More importantly, we believe they have the best price-performance ratio on the market: a 90 to 95 per cent efficiency, or overall equipment effectiveness,” he said. “And they have the lowest energy consumption in the sector under the same production conditions.”

As part of this new push into North America, Plastiblow spare parts are stocked by Globeius in Florida and Mexico, and can be shipped easily into Canada; and the company also plans to have a machine available for demonstrations in Miami. “On the sales and service side, we have two full-time blow molding service technicians located in Mexico who can travel throughout North America, and we also have regional sales representatives in the U.S. and Canada,” Sands said. “Our representative in Ontario is Steve Sawdon at Wesco Services – Steve and I worked together at Mold-Masters Ltd. back in the 1990s, so we have a well-established connection and a good business relationship. And we’re also looking for sales representation in Quebec.” Globeius has already installed four new Plastiblow machines in Canada, he added.

Aside from its expanded blow molding activity with Plastiblow, Globeius represents other plastics-related brands, including Bunting Magnetics, Crizaf conveyors and separators, Moditech granulators, Powertech Components, and commercial purging compound maker Slide Products; and it has its own Plastics Solutions brand of products for the injection molding, extrusion, and raw material conveying sectors.