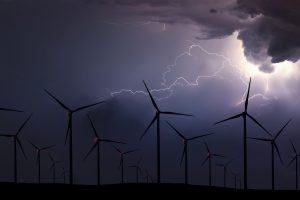 As new wind turbines pop up by the thousands, the odds of them getting struck by lightning also increase.

Lightning protection systems exist for conventional wind turbine blades, but protection was needed for blades made from thermoplastic resin composites and manufactured using an innovative thermal (heat-based) welding process developed by scientists at the National Renewable Energy Laboratory (NREL) in Golden, Colorado. Using NREL’s patent-pending thermal welding process for thermoplastic blades instead of adhesives eliminates the downsides of added weight and cracking potential – but just by virtue of their height, they will get struck by lightning, the more so since thermal welding requires adding within the blade a metal heating element, which can attract lightning.

As a result, a team of NREL researchers led by Robynne Murray and supported by General Electric (GE) and LM Wind Power (a GE subsidiary) invented a new lightning protection system to keep the novel thermoplastic materials safe.

“Thermal welding is an important step in the progression of commercializing thermoplastic materials for wind blades, but what happens when lightning strikes a thermal-welded blade? That was an unanswered question and a big concern,” Murray said. “For thermal welding of thermoplastic blades to become commercially viable, it’s critical that the conductive bond lines be protected from a lightning strike.”

The team infused an expanded aluminum foil into the blade skin to divert lightning current away from the metal heating elements. They then completed experiments using a simulation that showed that a lightning strike would not cause blade failure with the lightning protection system in place.

Physical damage tests – which subject the blades to high currents of electricity – demonstrated that about 80 per cent of the electric current went into the expanded aluminum foil layer for lightning protection and not into the blade skin. The carbon fiber beneath the damaged area of the tip was also unscathed.

The research confirmed the design can protect wind turbine blades against failure caused by lightning strikes, but work remains to be done to develop a market-ready thermal welding system

“We answered the question about lightning, but there are more questions to answer,” Murray said. “The next step for us is to do structural validation of thermally welded blade bond lines and blade tip segments. I hope we can do this in the next year or so.”