McGill University researchers have developed a new chemical process that could turn lobster, shrimp, and crab shells into biodegradable plastic.

For most of us, lobster shells are just scaly-looking things that pile up on the side of our plates while we pick apart and devour an overpriced crustacean at the local seafood restaurant.

Researchers at McGill University in Montreal have found a more noble end for discarded lobster shells, however, by developing a new chemical process that could turn them into biodegradable plastic.

The plastic is derived from chitin, a material from the exoskeleton of arthropods such as lobsters, as well as shrimp, crabs, and insects. Recent research at the University of Georgia used chitin — and also a derived substance, chitosan — in flexible food packaging. Chitosan has also been used in disposable medical products such as bandages, thread, and stitches by scientists at Harvard University.

The McGill research builds on these successful uses of chitin and chitosan as plastics, but differs in that the researchers have found a way to make chitosan more durable. “A polymer is a really long chain of molecules, like a necklace,” said Audrey Moores, an assistant professor of chemistry at McGill, who developed the new technique along with graduate student Thomas DiNardo. “When chitin is transformed into chitosan, that chain gets chopped apart, so the bonds are weaker and the material breaks down more rapidly. That’s a good quality for some medical products that you want to degrade, like stitches, but not for other products. Now we can make a new material that’s super-durable and that could be used for food wraps, storage, and surgical implants. It’s also very resilient and non-toxic, so it has a lot of potential in biomedical applications.” 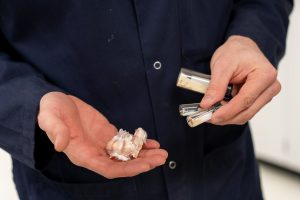 An added benefit is that the McGill process is simple — researchers mix chitosan powder with sodium hydroxide, then let the mixture age. “There’s no big machine required and no specific skills needed,” Moores said. “This is making it very appealing for large-scale application.”

Another plus is that producing a chitosan polymer could take a significant bite out of the millions of tons of waste produced by the seafood industry every year. On the downside, lobster-based shopping bags, drinking straws, and disposable cutlery are probably not feasible, Moores said, since the process won’t be able to scale up enough to compete against cheap plastics produced by the massive international petrochemical industry. “This is why our team is focusing on niche biomedical products,” she said.

Sourcing also might be difficult, since petrochemical plastics benefit from centralized refineries while the seafood industry is spread among many small producers up and down the North American shoreline. “What you would need is a place to concentrate that waste and process it,” Moores said. “The East Coast of Canada or Maine is an opportunity, because you have a concentration of the industries.” For that reason, Moores said, it will still be a few years before the McGill researchers come up with blends that will be commercially viable.