These softer brain electrodes are meant to replace traditional implants made from metal and other rigid materials that can cause inflammation and scarring in the brain. 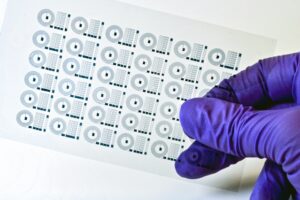 A big paradox of brain implants – a procedure in which electrodes are implanted into a specific part of the brain – is that the brain is one of our softest, most vulnerable organs while the implants are typically made from metal and other rigid materials.

And the problem relating to this is that, over time, these implant materials can cause inflammation and the buildup of scar tissue since the immune system is easily triggered by foreign bodies entering the brain. These scarring tissues wrap around the devices and can prevent them from working properly.

To overcome the problems associated with hard brain implants, a team of researchers at the Massachusetts Institute of Technology (MIT) in Cambridge, Mass. are developing 3D-printed soft, flexible neural implants that can gently conform to the brain’s contours and monitor activity over longer periods, without aggravating surrounding tissue. Such flexible electronics could be softer alternatives to existing metal-based electrodes designed to monitor brain activity and may also be useful in brain implants that stimulate neural regions to ease symptoms of epilepsy, Parkinson’s disease, and severe depression.

The devices are made from a soft, liquid-like electrically-conductive polymer that the MIT team then transformed into a slightly harder substance – described as being similar to viscous toothpaste – which they could then feed through a conventional 3D printer to make stable, electrically conductive patterns. The team – led by Xuanhe Zhao, professor of mechanical engineering and civil and environmental engineering – chose 3D printing because of cost and resolution limitations of more mainstream production processes, and also because 3D printing can fabricate flexible micro-scale structures.

The team printed several soft electronic devices, including a small, rubbery electrode that was implanted in the brain of a mouse. As the mouse moved freely in a controlled environment, the neural probe was able to pick up on the activity from a single neuron. Monitoring this activity can give scientists a higher-resolution picture of the brain’s activity, and can help in tailoring therapies and long-term brain implants for a variety of neurological disorders.

“We hope by demonstrating this proof of concept, people can use this technology to make different devices, quickly,” said Hyunwoo Yuk, a graduate student in Zhao’s group at MIT. “They can change the design, run the printing code, and generate a new design in 30 minutes. Hopefully this will streamline the development of neural interfaces, fully made of soft materials.”