RepelWrap, a self-cleaning plastic wrap, is now moving toward scaled-up production for the marketplace. 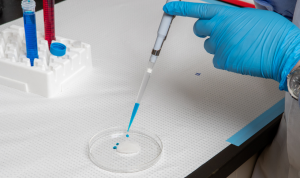 If the past two-and-a-half years have taught us anything, it’s the worldwide threat posed by viruses.

Now, new research by the inventors of a promising pathogen-repellent, self-cleaning plastic wrap has confirmed that it sheds not only bacteria, as previously proven, but also viruses, boosting its potential usefulness for interrupting the transmission of infections.

The new wrap, designed to protect against contamination on high-touch surfaces such as door handles and railings, is now moving toward scaled-up production through FendX Technologies Inc., which last year licensed the technology developed by inventors Leyla Soleymani and Tohid Didar, both from the Faculty of Engineering at McMaster University in Hamilton, Ont. To prevent pathogens and other agents from adhering to the plastic, the McMaster researchers used nanotechnology to sculpt the surface structure of everyday household wrap so it traps microscopic air pockets that push away everything that comes in contact with it, including water or blood droplets.

“This is a line of defence against emerging pathogens, including future threats that we haven’t yet seen,” Soleymani said. “This technology closes the door to the surface transfer of pathogens.”

Soleymani, Didar, and their McMaster colleagues have published three new papers about RepelWrap since their proof-of-concept research was first made public in December 2019, unknowingly on the eve of the COVID-19 pandemic. In November 2020, RepelWrap was been named grand prize winner in the 2020 Create the Future design contest, organized by New York City-based engineering-design news provider Tech Briefs.

The first of the new papers, published in January 2022 in the journal ACS Applied Materials & Interfaces, shows the wrap has the same effect using a new formulation which eliminates the use of fluorine, a chemical associated with health and environmental concerns.

The second paper, published in February 2022 in the nanotechnology journal Small, demonstrates a novel manufacturing method that transforms the wrap into highly flexible transparent films that repel pathogens and prevent blood clots under flow, to be used in medical catheters and tubing. The team has filed patents for the new technologies.

The most recent paper, published in ACS Applied Materials & Interfaces, shows the surface of the wrap is effective in repelling not just bacteria, as demonstrated in the proof-of-concept research, but also viruses, substantially increasing its utility. This latest research, using a real-world model developed by researcher Ali Ashkar’s lab in McMaster’s Michael G. DeGroote School of Medicine, also demonstrates how the wrap sheds a herpes virus and a coronavirus closely related to SARS-CoV-2 in structure, meaning it’s highly likely to repel COVID-19 itself.

The product works using a self-cleaning surface design microscopically “tuned” to shed everything that comes into contact with it, down to the scale of viruses and bacteria. The design was inspired by the surface of the water-shedding lotus leaf.

The next step is towards commercialization, although an exact timeline has not yet been set. “Everything is moving in the right direction as this invention continues to evolve and move toward the marketplace,” Didar said.