This Ajax, Ont.-based company uses laser ablation as an alternative to the chemicals and abrasive blasting systems currently in use for surface cleanings. 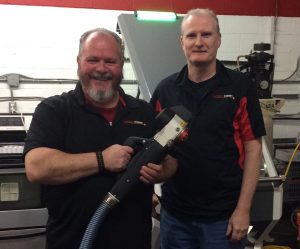 If you’re one of those people who thinks instant gratification takes too long, you’d hate traditional methods for cleaning molds and platens, which are not only laboriously slow but also intrusive and potentially damaging to the materials that are being serviced.

Ed Gledhill gets it, which is why he founded LaserClean, a unique cleaning and restoration startup located in Ajax, Ont. that uses laser ablation – the process of removing layers of material from a solid metal by irradiating it with a laser beam – as an alternative to the chemicals and abrasive blasting systems currently in use for surface cleanings.

An entrepreneur with a background in banking, Gledhill has years of experience in the commercial mobile cleaning industry as the long-time owner and operator of a conventional pressure washing cleaning company that serves the Toronto area. “I was looking to branch out, came across the laser ablation technology online and researched it, and saw a business opportunity when I discovered that there weren’t any service technicians using this process for the plastics industry,” he said. “I chose a handheld QF 500W industrial laser cleaning system manufactured by P-Laser – it’s a fibre optic laser that has a much longer lifespan than other technologies such as a Yag laser, but is the same price. I received startup financing from BDC, drew up a business plan with a consultant, bought the laser, and opened the company last year.” 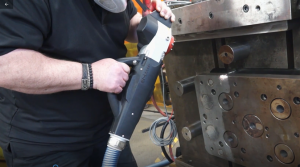 With its short pulses of laser light that allow for high precision cleaning while removing contaminates, impurities, and debris without waste, byproducts, off-gassing or vapours, laser ablation offers substantial benefits over traditional, contact mold and platen cleaning technologies such as dry-ice blasting, pressure washing, and media blasting, Gledhill said. “Cleaning with sodium hydroxide creates fumes and noxious gases, involves a lot of scrubbing with brushes, and compromises the surface by removing a microlayer,” he said. “And dry-ice and media blasting both project particulates at a surface at a rapid rate of speed, with media blasting essentially cutting a small layer off the surface; they remove contaminates but can also etch or damage the underlying surface. And they both need containment barriers that have to be erected, and media blasting requires a lot of post-job clean-up.”

By contrast, laser ablation is non-intrusive because it doesn’t use any media, and leaves virtually nothing behind but a clean surface. “The laser is adjusted to a desired wavelength and output power,” Gledhill said. “The heat or energy of the beam is absorbed, which excites the electrons on the surface or substrate, causing contaminate to crimp or shrink and pop off the surface being cleaned; any waste can be removed immediately by a vacuum. We can service an entire surface or work on layers, and also target very specific areas. The laser cleans intricate, contoured, and textured materials and surfaces instantly.”

Which translates into a lot less downtime for the customer. ”We can clean molds and platens on a production machine, without having to remove them, 50 per cent faster than other cleaning methods, which saves both time and manpower,” Gledhill said.

LaserClean has full, mobile delivery capabilities, which means the company can bring the laser beam cleaning technology directly to a customer’s site. “In order for us to work on-site, a plant has to have the power supply we need – which typically they do – and a suitable air system,” Gledhill said. “If we have these, we can go up and down a customer’s production line as part of its scheduled preventive maintenance and clean three or four machines per day. We once cleaned six platens in five hours, when it had taken that customer a full day to clean a single platen with sodium hydroxide before. Having us work on-site is a good solution for cleaning molds and platens that are too heavy to ship.” Processors with smaller, lighter molds – or that might be located beyond driving distance – can ship the molds and platens to LaserClean’s Ajax office for cleaning.

After less than a year in business, LaserClean is beginning to get noticed – and sometimes by plastics processors it wasn’t expecting to reach yet. “Through Google searches and videos of our process that we’ve posted on our YouTube channel, we’re now being discovered by the bigger companies that we couldn’t have contacted on our own because we didn’t have the connections,” Gledhill said. “Almost half of the companies that have contacted us so far are plastic processors, including four automotive parts molders. Workers on the shop floor appreciate our laser ablation because they no longer have to deal with hazardous chemicals, and upper management sees the productivity – we get the molds back into production with a lot less downtime and without compromising the integrity of the molds.”

LaserClean’s status is probably also being boosted because of what it doesn’t do, Gledhill said. “Most companies that deal with laser ablation are distributors looking to actually sell the lasers,” he said. “We’re not selling anything, we just want to clean equipment – that’s all we do, and we’re unique in that.”

LaserClean currently has a total of four employees, with most of its team on the road. And while it has one laser at present, that will probably change. “I can easily see us adding a second laser, so that one stays in our shop and one is taken on the road for in-house ablation,” Gledhill said. “If and when we get a second laser, we’ll definitely buy another QF 500W from P-Laser – it’s the Cadillac of the industry.”

As much as he gets a kick from the instant gratification of cleaning molds and platens with laser ablation, Gledhill – like all entrepreneurs – also enjoys identifying a market opportunity. “We’re in the problem-solving business for companies that work with coatings and sensitive tooling and equipment and that don’t want something abrasive hitting the metal and compromising it,” Gledhill said. “Laser ablation is effective in a multitude of markets, but it loves to clean hardened mold steel, and is very effective with aluminum molds. Some processors might be comfortable with media blasting and other older cleaning methods, but that still doesn’t make them effective. Laser ablation cleaning is something that every plastics processor will benefit from, and we’ve happy to provide it.”