This Quebec-based injection molder exited the auto parts molding business and, led by its production of wheeled carts, is now killing it as one of North America’s leading suppliers of products for the environmental, bulk food, and retail sectors.

It’s not easy to reinvent yourself. Arnold Schwarzenegger has pulled it off, going from Austrian bodybuilder to California governor to his current role as TV pitchman, but he’s the exception.

IPL Inc. is an exception in this regard, too. Go back less than 20 years and the Saint-Damien, Que.-based firm was big into molding parts for the automotive and non-automotive transportation markets. Fast forward to today and IPL has completely exited the automotive market and transformed itself into one of the leading North American producers of injection molded plastic products for the environmental, bulk food, and retail sectors. It employs more than 1,100 people across five separate facilities in Canada and the U.S. and manufactures over 400 products for the North American market.

And it’s a product shift that has been accomplished with clarity of purpose that might be surprising given the fact that IPL has had several ownership and management changes along the way.

Established in 1939 as a family-owned firm, IPL molded parts for Tier 1 and Tier 2 automotive suppliers and also snowmobile components for Bombardier until the mid-2000s, when it started shifting its focus to manufacturing products for the food and industrial sectors. The company remained family-owned until 2010, when it was purchased by Quebec-based private equity firm Novacap and Quebec provincial capital investment fund Fonds de solidarite FTQ for $94 million. By this time, IPL had four plants – three in Quebec and one in New Brunswick – and its newfound focus on environmental, bulk food, and retail continued under the new ownership. And it remained the focus after Dublin, Ireland-based environmental services and plastics operator One51 plc bought a controlling stake in IPL for $280 million in 2015.

Today, IPL consists of two segments. “The first is our retail packaging division, which is supported by two plants: one in Edmundston, N.B. and one in southern Missouri,” said Paul Palazzo, vice president, sales and marketing of IPL’s environmental division. “The second is our industrial division, based out of Saint Damien, which manufactures our environmental and bulk packaging products.” The two exist as surprisingly distinct business units. “There is separation between the retail packaging and the industrial divisions,” Palazzo said. “We are vertically integrated on both sides, with support groups for each, but have many synergies between both. We share corporate resources, but are separate as far as strategic planning and customer focus are concerned.”

In the two years since One51 assumed majority ownership, IPL’s footprint in both the retail packaging and industrial sectors has expanded dramatically. The industrial segment in particular is lighting it up. In November 2016, IPL acquired U.S.-based rigid plastic packaging supplier Encore Industries Inc. for US$35 million, in a bid to boost its industrial product offerings by drawing on Encore’s strength south of the border. “Encore has facilities in Ohio, Georgia, and Minnesota, and bringing the firm into IPL will provide expansion opportunities in the growing North American plastic industrial packaging market, and deliver a high quality and complementary customer base that will provide cross-selling opportunities for IPL and Encore’s products,” Palazzo said. “The acquisition makes us the third largest player in America in the plastic injection molded products market.”

FROM CARS TO CARTS

Since long before IPL was sold to Novacap, it was making a name for itself as a molder of wheeled carts made from HDPE for municipal, commercial, and industrial recycling and solid waste and organic management for a variety of Canadian municipalities. “The environmental segment of IPL’s industrial division started making carts for the Quebec municipalities in 1992,” Palazzo said. “As more cities started to move towards single-stream recycling and source-separated organics, we saw an opportunity for growth, and this was the main reason we exited automotive parts production in the mid-2000s. We’ve now evolved from being a small player to a major supplier of carts, and are the only cart manufacturer in Canada.”

It’s a market segment that has spurred IPL towards some of its biggest contracts and most innovative achievements. Last year, IPL pushed the limits of manufacturing and distribution in delivering an important $45 million project for the regional municipality of Peel, the second largest municipality in Ontario. In only three months, IPL was able to successfully deliver over 1.2 million rolling carts and kitchen containers to 317,000 homes in the cities of Brampton and Mississauga, and the town of Caledon. In order to efficiently distribute the carts to the 317,000 homes in such a short time, IPL used a new technology utilizing smart phone scanning. Every produced cart was initialized with a unique chip containing the cart’s serial number, GPS coordinates, and home address files. Using the RFID technology, the delivery team could, just by using a smart phone to scan the cart, know exactly where and how to deliver each cart, which made the delivery process much easier and faster. Using the same technology, the management team was able to do live monitoring of the delivery process. “The project allowed us to position ourselves a notch above any North American competition,” Palazzo said. “Not only were we faster and more efficient than any of our competitors, but the technology used in this project will also help us manage the region’s on-going growth and 10-year maintenance and service agreement that is part of the project.”

And in April 2017, IPL won a major contract for providing organic wheeled carts to the city of Calgary. The contract, worth $13 million, includes key production and delivery of 325,000 organic rolling carts intended for the implementation of a new composting program beginning in summer 2017 in all single-family homes of the city. 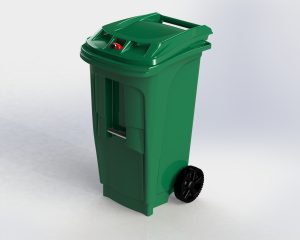 If IPL industrial division’s recent successes with contracts for regional municipality of Peel and the city of Calgary are any indication, its goal of pushing into the U.S. is definitely doable. “We’ve been winning bids in the Canadian market because of our approach,” Palazzo said. “We’re very customer-oriented. Since we’re not the biggest player in the market, we can be more flexible. We’re very nimble and responsive, and we don’t have a large bureaucracy to slow us down.”

So don’t be too surprised if IPL makes as big a splash in America as Schwarzenegger.