A new type of plastic developed by scientists at Colorado State University can – in theory, at least – be recycled over and over again.

Actress Shirley MacLean and other less celebrated believers in reincarnation think that human souls are perpetually recycled to return to life in other bodies.

True or not – and we’re not eager to find out – it appears that plastic, at least, can be reused indefinitely. As reported in the April issue of Science magazine, a team of scientists at Colorado State University have invented a new type of plastic which, when exposed to the right chemicals, breaks down into the same basic building blocks that it came from, meaning that it can – in theory – be recycled over and over again. 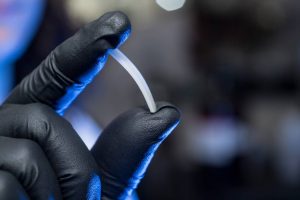 The new plastic is designed to solve a major impediment to plastic recycling: most plastics degrade into molecules that aren’t immediately useful. Transforming those molecules back into plastic or into some other product requires many chemical reactions, which makes the recycling process less efficient. And while biodegradable plastics have become popular in recent years, they break down only if the right microbes are present; more often than not, these plastics end up lingering in landfills or floating in the ocean.

But designing an endlessly recyclable plastic polymer is a tall order. Polymers are long chains of small molecules, called monomers, that link together like beads on a string. Monomers that need extreme temperatures or too much chemical coaxing to join up into polymers might not be practical building blocks. And resulting polymers need to be stable up to a high enough temperature so that, for example, pouring hot coffee into a cup made of them won’t destabilize the chains and melt the plastic.

Led by Eugene Chen, a professor in the Department of Chemistry at Colorado State University in Fort Collins, the scientists set out to solve this challenge. The team had had some luck in the past creating a polymer that could be broken down into its starting molecules. But the resulting plastics created by their lab and others on the same track were too soft and temperature-sensitive to have much practical use.

In their most recent breakthrough, Chen and his colleagues modified one of their previous creations, a small ringed molecule, by adding another ring in a way that braced the molecule into a particular conformation. That rigidity helped the monomers quickly link together at room temperature into polymer chains that are heat-stable. Then, when exposed to certain mild chemicals or high enough heat, the polymers degraded back into monomers. The researchers were able to repeat this cycle several times, showing that, in theory, the polymer could be infinitely recyclable.

But the team isn’t home-free just yet. The new polymer technology has only been demonstrated at the academic lab scale, Chen said, but with the help of a seed grant from CSU Ventures, the chemists are optimizing their monomer synthesis process and developing new, even more cost-effective routes to such polymers. They’re also working on scalability issues on their monomer-polymer-monomer recycling setup, while further researching new chemical structures for even better recyclable materials.

The jury is still out on actual human reincarnation, however.