Sometimes holding onto traditions can be a hindrance to the success of family businesses, but there are ways to innovate while also honouring them. 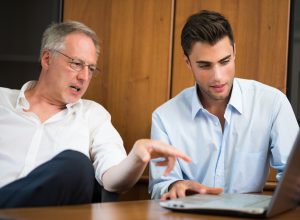 Traditions are important to family businesses. Founders don’t only pass on ownership to the next generation, they also pass on traditions.

Early studies suggest that traditions were an impediment to change because they burdened the family business with history. For instance, traditions can make family businesses risk-averse and less innovative because the preservation of the status quo trumps anything else. For example, in some business families leadership is always passed on to the eldest son — despite the presence of more qualified and committed younger siblings.

But in a recently published article two of us co-authored in the Family Business Review, we suggest family firms shouldn’t be so quick to cast traditions aside. While traditions themselves are often rigid, the process by which they’re passed from one generation to the next creates opportunities to creatively reinterpret them.

Managing traditions better can help family businesses address two of their fundamental tensions: the need to modernize the business and the need to honour the founder’s vision.

Tension between continuity and change

Family firms struggle with the need to maintain continuity when confronted with ever-changing market demands.

Honouring the vision of the founder often leaves families prioritizing continuity over change; this phenomenon is often referred to as the “innovation paradox.” Compared to their non-family peers, family businesses tend to be less innovative because of their attachment to traditions; other research, however, says some family firms are more innovative due to their traditions.

To make sense of these conflicting results, we need to look beyond the assumption that traditions limit the ability to innovate.

Looking at the actual traditions, it’s easy to see them as being inflexible. As a fictional example in the HBO series Succession, Logan Roy is unwavering in his commitment to traditional media, whereas his son Kendall wants to broaden the company’s horizons and branch into digital media. Logan’s stance creates serious tensions between the two generations.

However, by focusing on how to reinterpret the meaning of traditions, family firms can be more open to changing them over time.

The interplay between what traditions entail and how to honour them can be understood through what’s known as Theseus’s Paradox from Plutarch’s legend in ancient Greek folklore.

In Theseus’ Paradox, Theseus’s ship — preserved by the Athenians — was repaired and improved over countless years. Even though the original parts had been replaced, the meaning and authenticity of the famous ship remained long after the actual structure had entirely changed.

Applying the story of Theseus’s ship, the structural elements of traditions — the rituals — can remain intact across generations but updated to be relevant in today’s world.

Instead of letting traditions hold them back from change, the most successful family firms keep rebuilding and rejuvenating their businesses piece by piece, establishing their innovation not as an act of disruption, but one of continuity.

Applied to Succession, if Logan Roy had instead focused on how the company could keep its traditions and values intact while branching out into new technologies, he could have opened up the business to innovation and adaptation over time.

Like Theseus’s ship, the Roy family firm could have been rebuilt piece by piece over the years to keep up with changes in the media landscape while keeping the original structure intact.

Few family businesses survive beyond the current generation. One reason for their failure is that only the senior family leader makes decisions.

The resulting inability of the next generation to make decisions can have well-known tragic consequences, as in Sophocles’ account of Oedipus, the king of Thebes, who unwittingly kills his father, marries his mother and brings disaster to his kingdom and family. The play highlights the tragedy that can ensue when decision-making power is denied to the next generation.

Applied to family business, the Oedipus tragedy suggests that in order to exercise decision-making power, the next generation must destroy the past in an act of creative destruction. However, in family businesses, this kind of action is more destructive than creative, since succession requires inter-generational collaboration instead of conflict.

In Succession, this scenario plays out in the show’s second season. When told by his father that he’ll have to take the fall for the company’s mistakes — and therefore stripped of all decision-making power — Kendall turns the table in an Oedipus-worthy move (minus the incest) and betrays his father and family, nearly destroying the entire company.

In a similar fashion, many next-generation members are trapped by the belief that founding values and traditions must be destroyed for them to assume decision-making power.

Other family businesses, however, successfully reinterpret the founding values and traditions.

One way this can be done is through collective remembering: when senior family members share stories about past achievements and discuss their meaning with the next generation, they co-create narratives that are relevant to both generations.

As a result, long-standing values and traditions are continually reinterpreted across generations, adapting them to the present day.

These collective stories motivate next-generation members to make bold changes and be persistent, similar to their founding ancestors.

They also remind senior leaders to share decision-making power with members of the next generation and allow them to make the changes that are needed to rejuvenate the business and remain successful.

An understanding of how to manage traditions can help family businesses navigate their two fundamental paradoxes. Both are resolved by viewing traditions as a two-pronged concept — the ritual, constructed in the past; and the meaning, which can be continually updated and therefore managed in an ever-changing present.

For instance, families that have always passed on leadership to the eldest son may reinterpret this ritual to select a family leader who will preserve rather than lead the family business. This leads many next-generation leaders to hire non-family talent as business leaders instead of leading the family business themselves.

Consequently, traditions shouldn’t be thrown out of the firm. They provide a vital foundation for the family business. Nor should they be rigidly enforced, but instead reinterpreted by the next generation. By establishing this adaptable link between the past and the present, more family business will be able to reinvent themselves into the future.